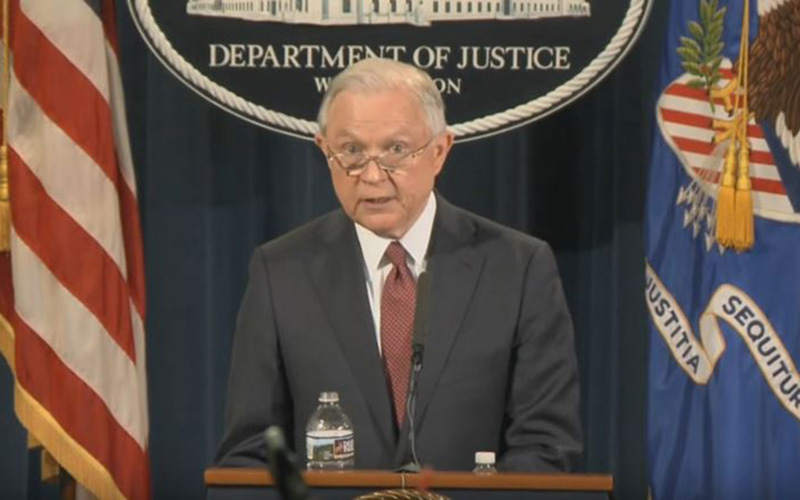 WASHINGTON – Trump administration officials defended their proposal to “wind down” a deferred deportation program over the next six months, calling it the least disruptive way of terminating a program that has protected 800,000 young immigrants.

The White House, the Justice Department and the Department of Homeland Security all said the alternative is to let the program be challenged in court, which several states threatened to do, and run the risk of having it revoked all at once by court order.

Administration officials also downplayed the threat of deportation if Congress cannot agree on a replacement plan by March 5 – as the White House has urged – saying DACA recipients will not be targeted for removal.

But others in Washington were quick to blast the administration’s reasoning.

Former President Barack Obama, who enacted DACA by executive order in 2012, called the decision to end it “a political decision,” and not one based on the legality of the program.

Obama, in a statement released Tuesday, said the original program was “based on well-established legal principle” and prompted by Congress’ inability to act on immigration reform – the very solution the Trump administration is calling for.

But the White House said the Obama order was never meant as more than “a temporary stopgap measure.”

Sen. John McCain, R-Arizona, said Tuesday that Obama was wrong to take “unilateral action on this issue,” but he said the current administration’s proposal to do away with it would do more harm than good.

“I believe that rescinding DACA at this time is an unacceptable reversal of the promises and opportunities that have been conferred to these individuals,” McCain said in a statement released by his office. DACA recipients who were brought to the U.S. illegally “through no fault of their own should not be forced to return to a country they do not know,” he said.

An estimated 28,000 Arizonans have benefited from DACA. Under the program, people who were brought to this country illegally as children can apply for protection from deportation – if they meet several other criteria, including having a clean record and being in school or the military, among others. Recipients also get work authorizations under the program.

Under the “wind-down” unveiled Tuesday, no new applications for DACA protection will be accepted by the Department of Homeland Security. People whose DACA coverage is set to expire before March 5 will have until Oct. 5 to apply for renewal – after Oct. 5, no more renewal applications will be accepted.

Citizenship and Immigration Services officials will continue to weigh pending requests on a case-by-case basis under the guidelines of the 2012 order.

After March 5, DACA recipients would be subject to deportation, but Homeland Security officials said Tuesday that they will not suddenly become priorities for removal.

“When their period of approved DACA expires, they revert to being ‘present without admission,’ which is a violation of the Immigration Nationality Act, which does make them amenable for removal,” a senior department official said in a background briefing Tuesday.

Someone of this status may still be charged when encountered by an immigrations officer but is considered a low priority.

The database that holds all the personal information of current DACA recipients will be available to law enforcement officials “as needed” when targeting high-priority individuals, the department officials said. They would not comment on exact procedures for sharing the information in the database, but said it will not be provided “proactively” to officers.

Attorney General Jeff Sessions announced the decision, saying the administration had no choice but to shut down what he called an unconstitutional act by Obama that would not have survived a court challenge, leaving the “potential immediate shutdown of the entire DACA program.”

He said DACA posed the same constitutional problems as the Obama-era DAPA program (for parents of lawful residents), which was blocked in 2015 by the 5th U.S. Circuit Court of Appeals.

“We cannot admit everyone who would like to come here,” Sessions said of the Obama policies. “That is an open border policy and the American people have rightly rejected it.”

Trump did not make an appearance on the DACA decision, but said in response to a reporter’s question after an unrelated event Tuesday that he has “great love” for DACA recipients and hopes Congress can craft a replacement.

“Speaking to members of Congress, they want to be able to do something and do it right. And we really have no choice,” Trump said, according to a White House press pool report.

Sanders said the administration is confident Congress will act on the issue and is ready to work with legislators.