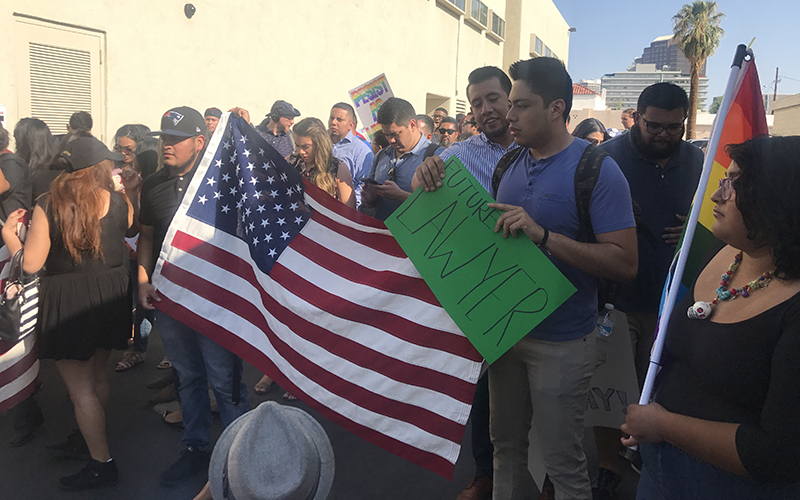 Supporters of DACA gather for an announcement viewing party at UCFW Local 99 headquarters in central Phoenix on Tuesday. (Photo by Courtney Mally/Cronkite News) 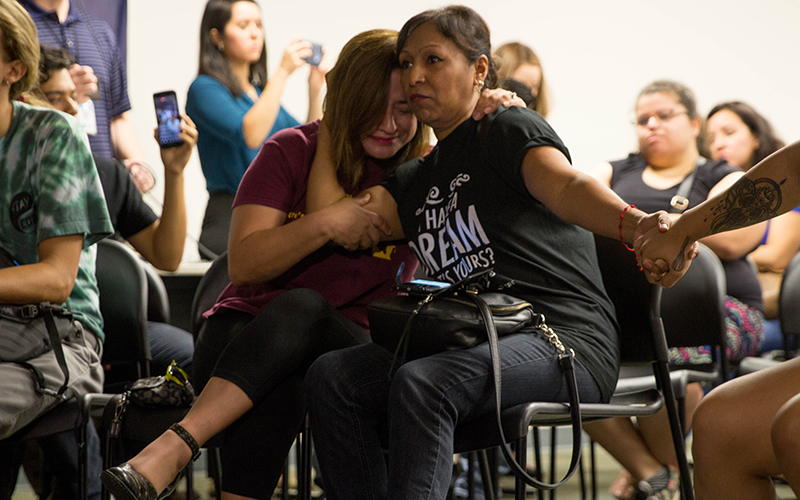 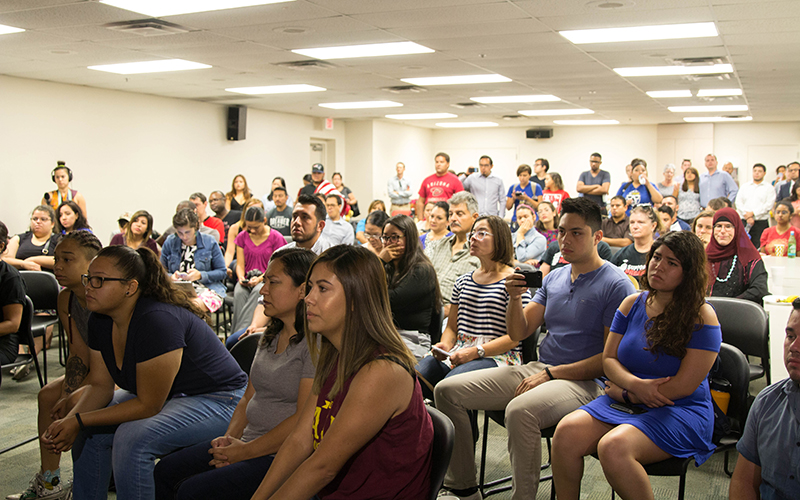 Community members get ready to march toward the Immigration and Customs Enforcement field office in Phoenix after hearing the DACA announcement. (Photo by Andrea Jaramillo/Cronkite News) 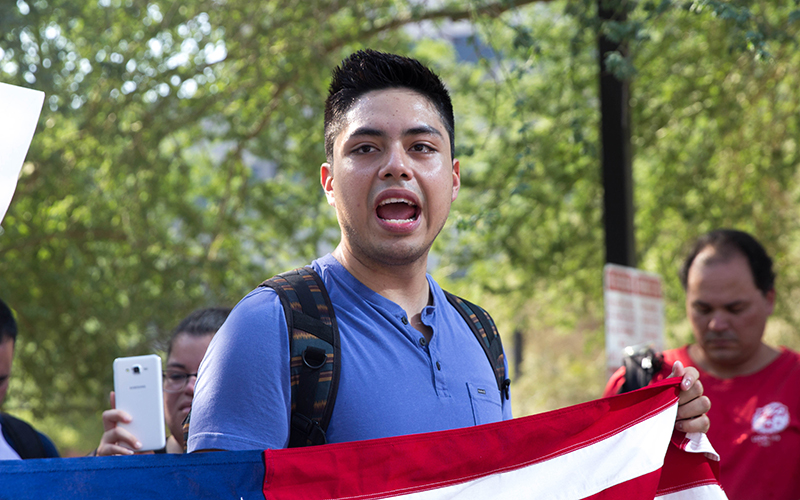 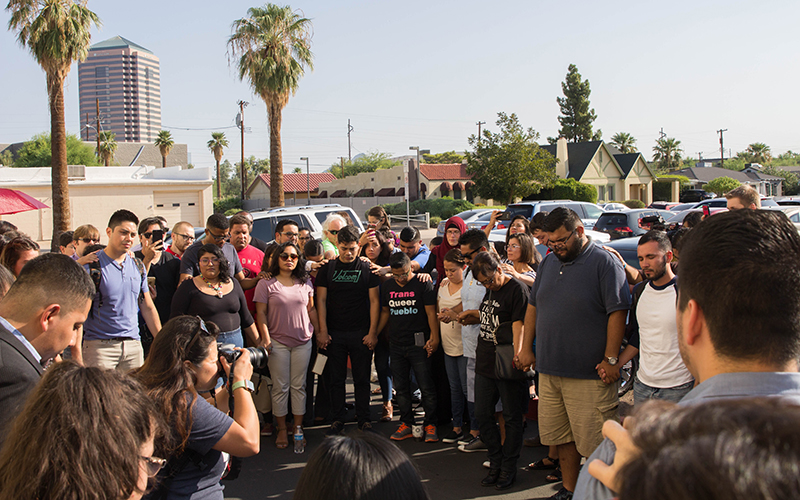 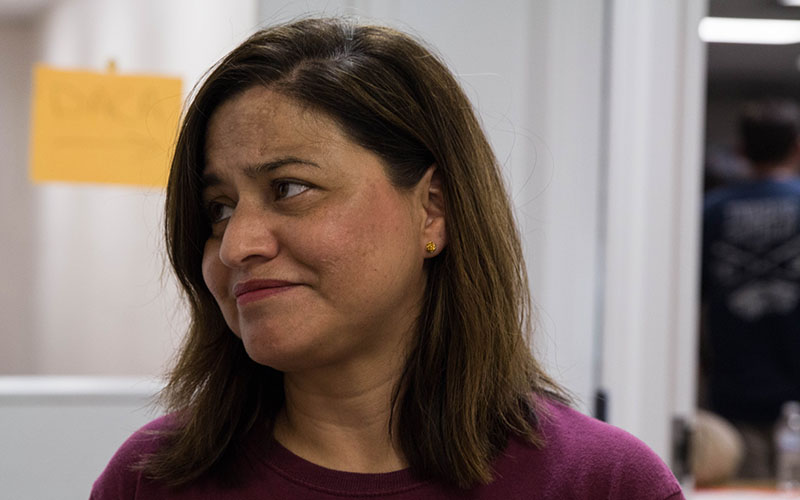 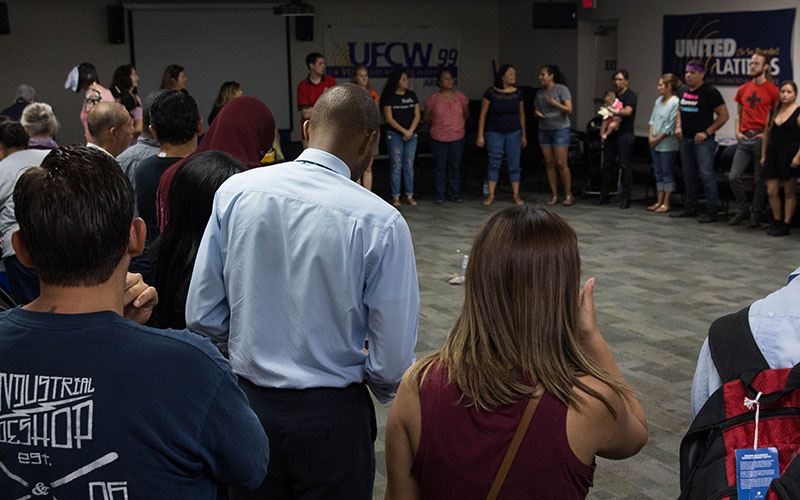 Protestors gather inside the United Food and Commercial Workers building to discuss what the repeal of DACA means for them. (Photo by Tynin Fries/Cronkite News) 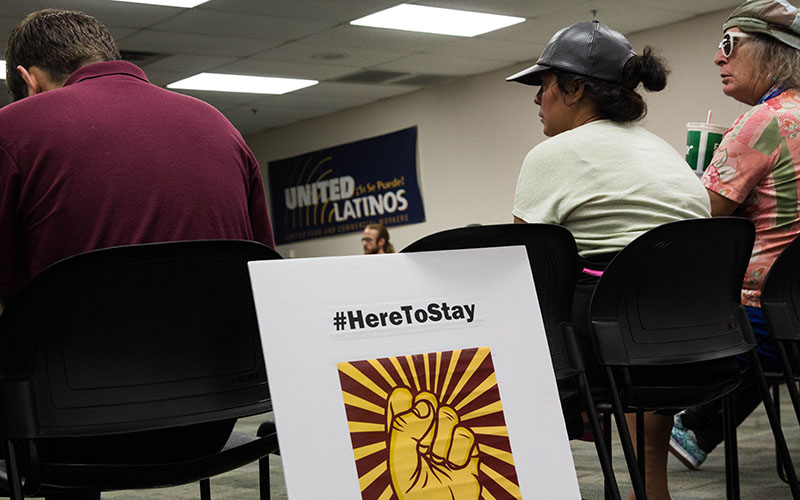 Protestors meet inside the United Food and Commercial Workers building to discuss what the repeal of DACA means for them. (Photo by Tynin Fries/Cronkite News) 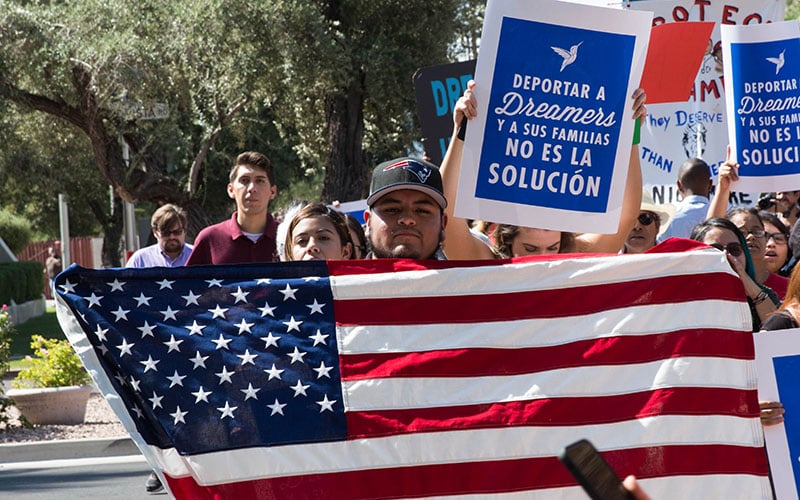 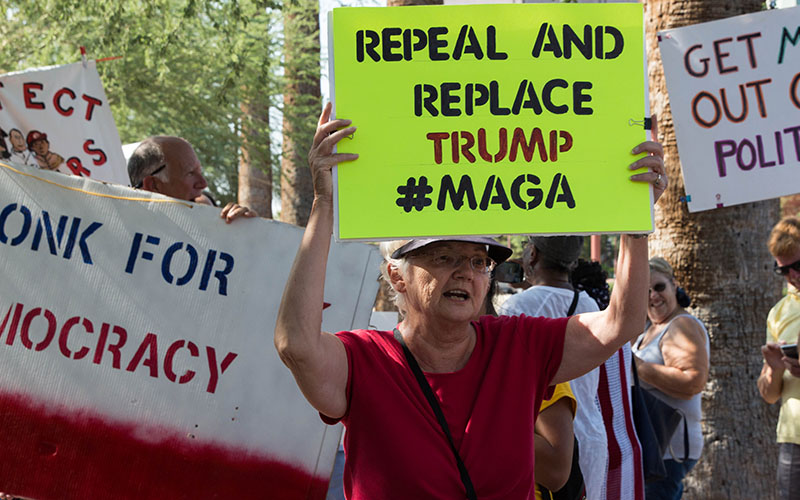 “I think DACA is important and these people should be allowed to stay. They are modern citizens, they just aren’t citizens yet,” Sue Baird, 67, of Phoenix said. (Photo by Tynin Fries/Cronkite News) 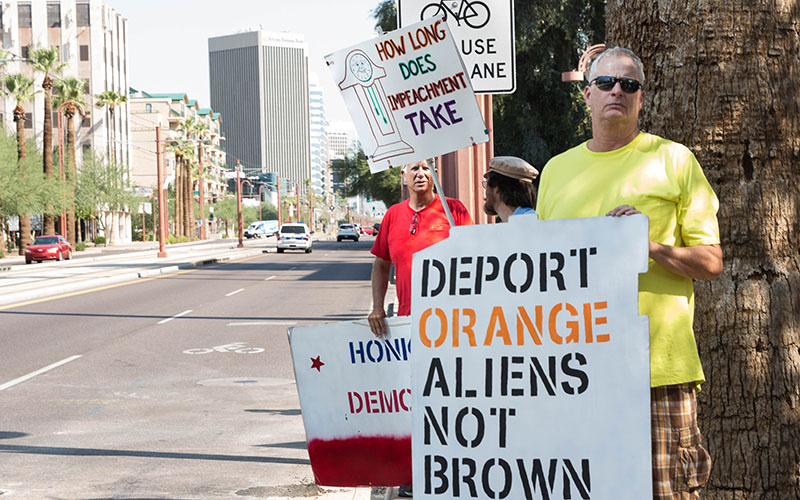 Protestors hold signs against the repeal of DACA outside of ICE headquarters in Phoenix. (Photo by Tynin Fries/Cronkite News) 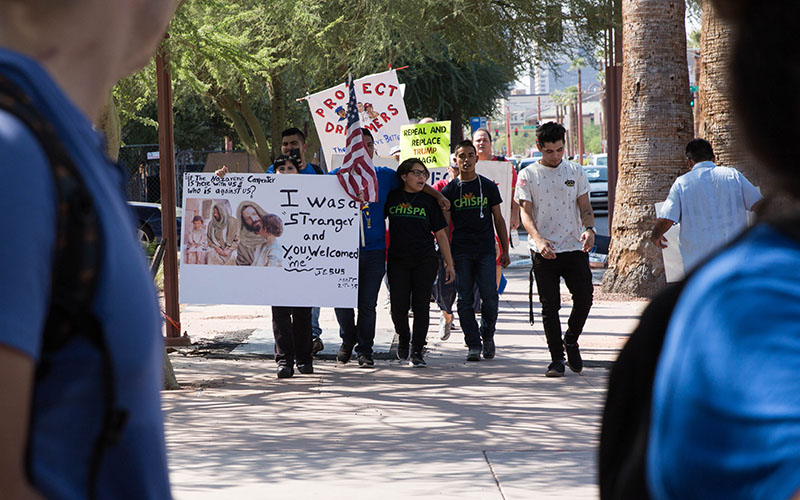 Protestors yell “Undocumented. Unafraid.” as they march down Central Avenue following the repeal of DACA. (Photo by Tynin Fries/Cronkite News) 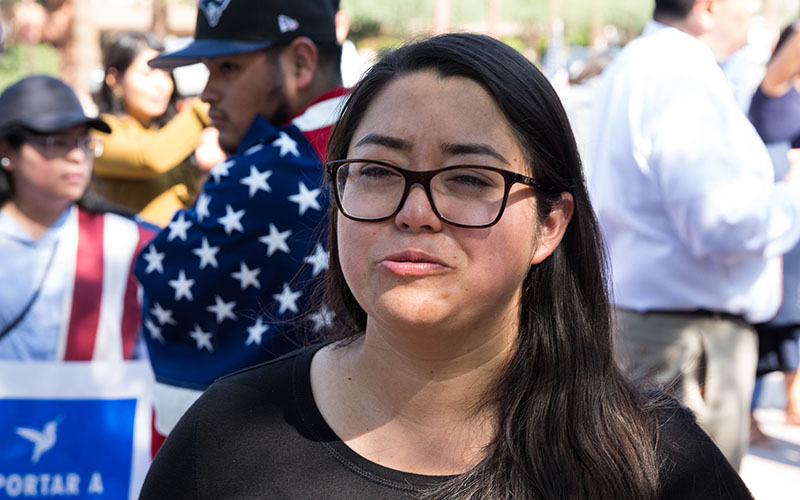 “We are not going back to the shadows. We exist beyond DACA,” said Abril Gallardo, a 2013 DACA recipient. 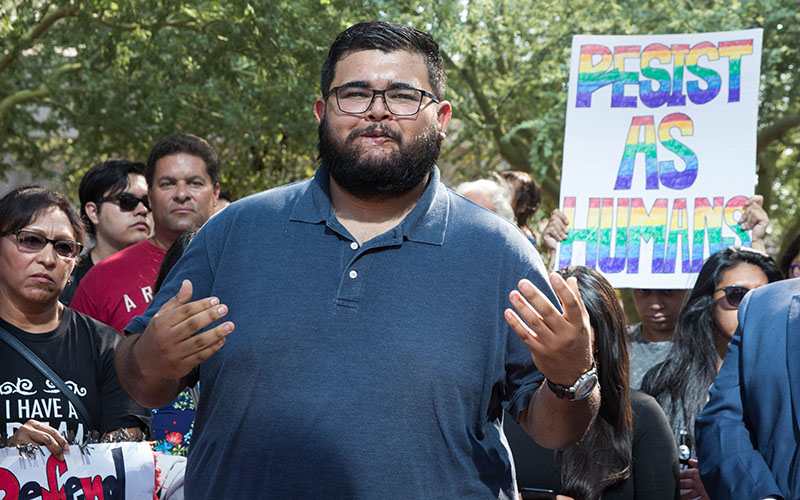 Ricardo Zamudio, youth programs director at Neighborhood Ministries, shares his story as part of the protests against DACA repeal outside of ICE headquarters in Phoenix. (Photo by Tynin Fries/Cronkite News) 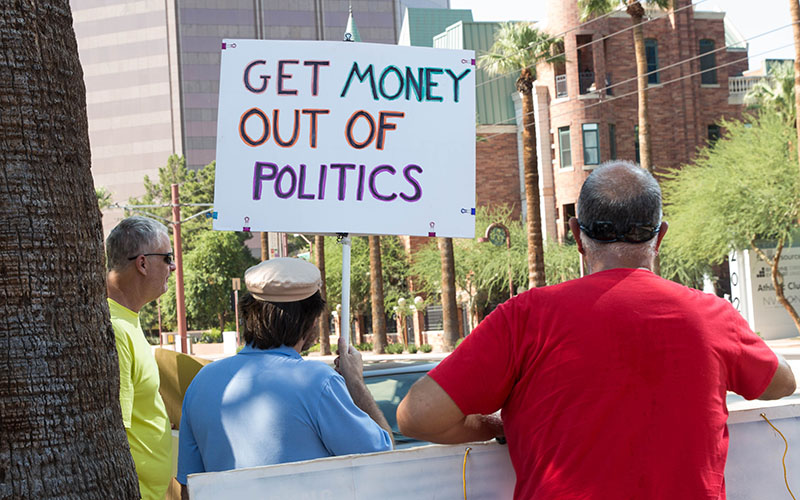 Protestors hold signs against the repeal of DACA outside of ICE headquarters in Phoenix. (Photo by Tynin Fries/Cronkite News)

There are approximately 28,000 DACA recipients in Arizona.

“I’m a little anxious,” said Francisco Luna, member of the non-profit group, Trans Queer Pueblo, and DACA holder since 2013. Luna said he wasn’t expecting good news since he heard Donald Trump was about to make an announcement.

“(I wondered) What is my future going to look like? Do I put everything on hold?” Luna said. “Nobody should be left behind. We’re gonna fight for everybody.”

At 8 a.m., Sessions appeared on the screen. DACA recipients and other members of the community sat down and paid close attention. Tears started to drop as Sessions’ speech progressed.

When the announcement ended, a heavy silence took over the room. DACA holders hugged each other and passed tissues around. Some of them wiped their tears, took deep breaths and quickly attended reporter’s requests for interviews, only to return to their family and friends.

Sessions said there would be a wind-down process, where no new DACA applications would be accepted, to give Congress a chance to pass related legislation “should it so choose.” That period will last six months.

Congress, get ready to do your job – DACA!

In a written statement released by the White House, Trump said he does not favor punishing children for the actions of their parents, but as a country, the people must recognize that the United States of America is a nation of opportunity because it is a nation of laws.

“The legislative branch, not the executive branch, writes these laws – this is the bedrock of our Constitutional system, which I took a solemn oath to preserve, protect, and defend,” Trump said in his written statement.

“Congress, get ready to do your job – DACA!” Trump tweeted on Tuesday.

The announcement also had the support of Arizona’s Senate President and former governor.

“Regardless of how one may feel about the substantial contribution to our society by individuals benefitting from inclusion in DACA, it seems very apparent that our former President’s Executive Order exceeded his Constitutional authority,” said Steve Yarbrough (R-Chandler). “As for the state legislature, we have been consistently reminded by the proponents of DACA that immigration policy is within the exclusive jurisdiction of Congress, not the state legislature.”

“Because of DACA, we’ve had a surge of more illegal immigration because everybody wanted to get in underneath that,” said Jan Brewer, Arizona’s governor from 2009 to 2015. “Today, the President of the United States made a decision to send it to Congress and let’s fix it for once and for all.”

“I think it’s important to remember the President of the United States has said more than once that he’s going to deal with this with his heart and his compassion, that it needs to be done through a lawful democratic process and that’s what we are about to embark upon. He knows it’s a terrible situation for the Dreamers and now we have time to fix it,” Brewer said. “It’s going to be tough and it’s going to be hard, but I believe that doing the right thing always means doing the hard thing.”

.@POTUS‘s decision on #DACA is wrong approach at a time when both sides need to compromise on #immigration reform https://t.co/kPBCUhJ2m4 pic.twitter.com/5stY5spxOC

Abril Gallardo, 27, is an organizer with LUCHA who helped plan the demonstration outside of the Immigration and Customs Enforcement field office in Phoenix on Tuesday.

With DACA she was able to purchase a car, start working and financially support herself. Now, she said all she can think about is the about the economic impact the removal of DACA will have on the recipients.

“I just felt like nothing good could come,” Gallardo said. “I think my first reaction was to laugh because what this administration is doing is a joke.”

She said she felt anxious, but seeing everyone supporting each other has given her hope. “For the people that are out there, we are going to continue to fight and we need them to unite and to join us. Together, we are going to be OK.”

State Rep. Isela Blanc, D-Tempe, also attended the demonstration at the ICE field office and said Sessions’ description of people like her during Tuesday’s announcement was emotionally devastating.

At one point, Blanc was undocumented herself.

“I think the language was what struck me,” Blanc said. “It was really divisive, it was really negative towards immigrants, all immigrants.”

She brought up Ronald Reagan’s 1986 Immigration Reform and Control Act, which helped created a pathway to citizenship.

“I’m a recipient of a Republican President’s vision of an America that was inclusive of immigrants,” Blanc said. “And here we are 30 years later.”

Luna with Trans Queer Pueblo said DACA allowed LGBTQ people to find a job, housing, and to live with their chosen family.

“When DACA came out, it gave a lot of us, like myself, the opportunity to come out of the closet and, if there were any consequences, that we would know that we would have something to back us up,” he said.

Luna added the decision puts these people at risk and that one of the next steps is making sure his community is protected.

“Taking away DACA is, for many of us, a death sentence,” Luna said.

“I think we all knew that it was coming, especially this past week we sensed it,” he said.
Like other members of the community, he said he’s angry about how Sessions described them.

He said DACA recipients try to do everything right, but they still can’t prove that they’re American or worthy enough.

“I’m mad because I think in every sense a DACA recipient is American; we’ve all been here a long time,” Hernandez said. “This is home. This is what I want to be calling home forever.”

“When I heard Jeff Sessions was gonna be the one talking about DACA, I knew something bad was gonna happen, because Donald Trump didn’t even have the guts to end DACA himself, he sent Jeff Sessions,” said 23-year-old Angel Bautista. “But deep inside, I had hope.”

“He was speaking hate, he was talking that we were stealing the American people’s jobs, but we’re Americans as well, this is the only country that we know, and they don’t consider us Americans,” said Bautista. “I don’t know how somebody can be so cold-hearted.”

“I just want to let everyone know that we’re all in this together. I’m about to graduate college so I don’t know what’s gonna happen right now,” Bautista said.

“We can’t just cry every day. We have today to cry, to mourn, but tomorrow we have to stand up and fight again,” Bautista said.

Bautista started to cry as he talked about passing through his old high school on his way to the gathering, and watching kids going to school.

“I just saw myself five years ago. And I just want to fight for them. I can’t let them down because when I was in high school, Dreamers before me didn’t let me down,” Bautista said.

Bautista is graduating from community college next May, and was planning to transfer to Arizona State University next semester and said he wants to go to law school or medical school. He has a sister and a brother who are also DACA recipients.

• From ‘fulfills a promise’ to ‘wrong’ and ‘heartless,’ online reaction to DACA news is swift
• DACA repeal could have negative economic impact in Arizona
• Immigration attorneys say DREAMers will be left in limbo
• Arizona business leaders express concerns about DACA repeal


After watching the announcement, community members stepped out of the UFCW building and formed a circle. They prayed in English and in Spanish. Then they formed a line to march toward ICE’s Phoenix field offices, located just a few blocks away.

Holding the American flag, DACA recipients lead the way and started marching on the sidewalk down Central Avenue. Drivers honked as they passed by.

Maricruz Ramirez was one of those who marched side-by-side with the DACA recipients and with good reason. She is the mother of three DACA recipients, and became involved with community organizing in 2010 when she realized her kids couldn’t go to college. Now, through DACA, two of her children are currently in college.

“It’s difficult for an undocumented mother, but not impossible. I did it once, when my kids couldn’t go to college, I organized events, I looked for funds, and I did it. But now I’m here supporting them so they can fulfill their dreams,” Ramirez said. “I’m gonna talk to my kids now and we’re gonna come up with a plan.”

Ramirez looks back and said the community is stronger now than it was seven years ago, but she thinks the political environment is harder.

“They are against all of us who don’t have a legal status,” Ramirez said.