DACA repeal could have negative economic impact in Arizona 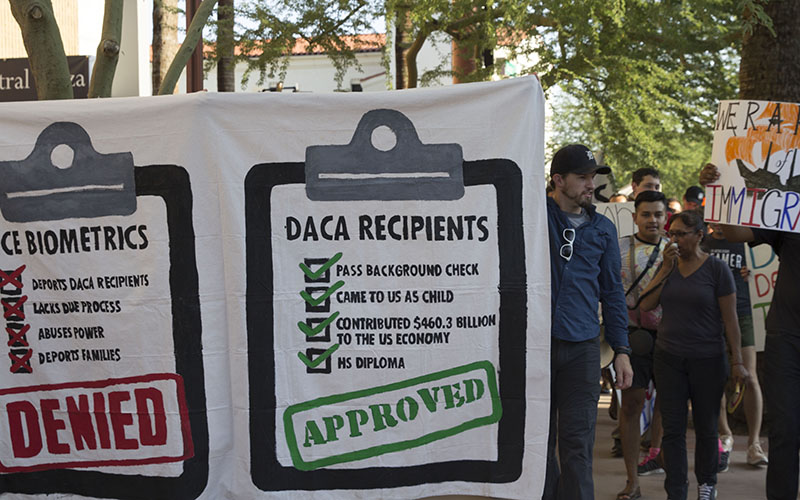 Protesters march outside of the ICE building in Phoenix against a potential repeal of the DACA program. (Photo by Lysandra Marquez/Cronkite News )

PHOENIX — Through DACA, Lili Sanchez has been able to obtain work as a licensed real estate agent and provide for her two young children. The fate of her profession and source of income now rests entirely in the hands of President Donald Trump. If the program is repealed, Sanchez will have few options left and will have to start from zero again.

While Trump’s decision regarding the status of the DACA program remains unknown, the potential impact of repealing it would extend beyond the roughly 28,000 Arizona recipients who contribute to their communities economically in different ways.

Sanchez said DACA has allowed her to be her own boss, be more present in her children’s lives, and to live working towards a better future. However, that all changed until the potential repeal of the program became a reality.

“It’s like living the American dream, I’ve been able to do so much, I used to work a nine-to-five. I‘m involved in my kids sports, in the things that they do,” she said.

According to data and surveys conducted nationwide by the Center for American Progress, 5 percent of respondents started their own business, adding that DACA recipients are outnumbering the general population when it comes to business creation.

Phoenix Mayor Greg Stanton published a statement on Facebook earlier this week in which he stressed not only the economic repercussions, but the emotional ones as well.

“DACA has made it possible for nearly 30,000 young women and men in Arizona to step out of the shadows and contribute to their communities and our economy,” the statement read.

It continued: “When President Trump talks about getting rid of DACA, he is telling the American people that he wants to rip apart families and divide our country. That is unacceptable, both morally and economically.”

Many high-profile national business leaders, including the heads of Amazon and Apple, among others, published an open letter to Trump earlier this week, in which they mention statistics published by the Center for American Progress. The letter read, in part:

“Unless we act now to preserve the DACA program, all 780,000 hardworking young people will lose their ability to work legally in this country, and every one of them will be at immediate risk of deportation. Our economy would lose $460.3 billion from the national GDP and $24.6 billion in Social Security and Medicare tax contributions.”

Lorenzo Sierra, vice chair for the Arizona Hispanic Chamber of Commerce, also echoed Stanton’s statement, adding the repeal could affect those who least expect it.

“It may be that somebody’s job is dependent on, whether it’s DACA or undocumented people, their jobs are dependent on them being here and their money circulating through the system,” he said. “It would be the ultimate irony to have someone who was saying hey, let’s get rid of them and next thing they know they lose their job because that income isn’t there that they didn’t realize was partially paying their salary,” he added.

While Sierra expressed major concern for the economic effects, he said he also worries about the emotional uncertainty DACA recipients face.

“That’s just the terrifying part for me, to think that people I know, people I trust, are going to be specifically targeted by the Trump Administration and by ICE. I wish I had answers. It absolutely frightens me,” he said.

Garrick Taylor, spokesman for the Arizona Chamber of Commerce, said the demographic that makes up DACA recipients are primarily young men and women rich in potential.

“New Americans are essential to Arizona and the United States’ ability to achieve future economic growth. The Arizona immigrant community, including DACA recipients, are young, bilingual and entrepreneurial, qualities we ought to celebrate,” Taylor said.

While the future is uncertain for tens of thousands of recipients in Arizona, Sanchez is optimistic about how she will face whatever may come.

“I have faith that something great is going to come out of this, we’ve come a long way. We’re not going to stop here, this is not going to defeat us,” she said. “We come from hard-working families, we’re strong, we’re going get through this.”