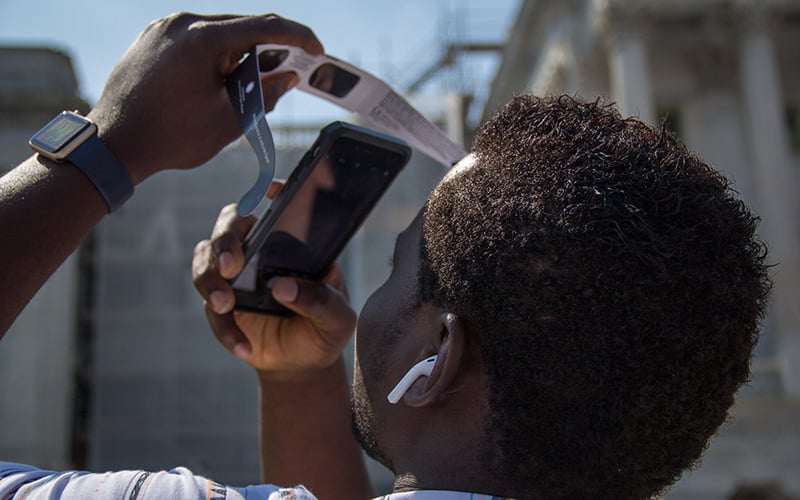 Eye experts say it looks like many people heeded warnings on the danger of staring at last week’s eclipse without eye protection. This man used protective glasses to protect his eyes – and his phone – outside the Capitol. (Photo by Adrienne St. Clair/Cronkite News) 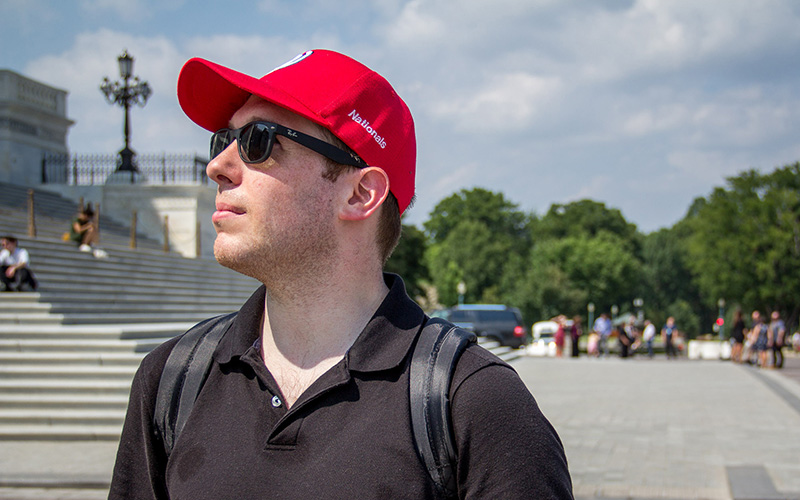 Northern Virginia resident Dan Letovsky, 29, took a day off work to eclipse events at the National Air and Space Museum before viewing the “Great American Eclipse” from the East Front of the U.S. Capitol – through NASA-approved glasses. (Photo by Adrienne St. Clair/Cronkite News)

WASHINGTON – After they stared into the darkness, it seems Americans are still seeing the light.

A little over a week after the shadow of the Great American Eclipse crept across the country, it appears that people who took the time to watch the eclipse also heeded public warnings and took precautions to protect their eyes.

A spokeswoman for the American Optometric Association said she checked with doctors in Arizona but that, as of earlier this week, none of them reported treating anyone with retina damage from the eclipse.

“No doubt there are some cases out there, but it sounds like the good news is that everyone used the proper eye protection,” said Susan Thomas, the spokeswoman.

After querying association committees that include eye doctors from across the country, she said, “No one reported back having any patients.”

That was echoed by Dr. Nathan Podoll, an assistant professor of clinical ophthalmology at the Vanderbilt Eye Institute in Nashville, Tennessee, who said the main concern leading up to the eclipse was the possibility of people developing solar retinopathy by staring at the eclipse without special glasses.

“So far, it seems that the public safety information that was put out there was really successful,” Podoll said last week. “I actually would’ve thought that we would’ve had more people presenting today with either concerns or true damage than we have, and so I’m pleasantly surprised.”

Podoll noted that the Vanderbilt Eye Institute had set up a triage clinic for anyone worried about eye damage after the eclipse. He said the clinic saw 10 patients, none of whom were diagnosed with solar retinopathy. Podoll himself saw one patient with vision concerns following the eclipse, but that patient was not suffering from retinopathy, either.

Solar retinopathy is characterized by blurriness or central graying and can lead to permanent vision loss, according to information provided by the National Eye Institute. And, according to Podoll, symptoms would first appear in the four to six hours following the event, and continue even after waking up the next morning.

Pictures of President Trump squinting into the sun without safety glasses went viral last week, but elsewhere in Washington others took pains to keep their eyes safe as they took advantage of the opportunity to watch the eclipse.

Dan Letovsky, 29, took the day off from his consulting job to attend special events at the National Air and Space Museum and later watched the eclipse in front of the Capitol.

He was worried about getting the right eclipse glasses, as his Amazon shipment was delayed. But he was able to watch the moon cross the sun with the safety glasses he got from the Air and Space Museum.

Podoll said there is still a chance some patients may come forward, but he is hopeful there will not be a significant problem.

“Folks are often … delayed in their presentation to medical care for a variety of reasons,” he said. “I’m sure we’ll continue to see some people of the coming days to possibly weeks who will trickle in with some concerns or vision problems. But, so far, it seems like it’s been really great.”