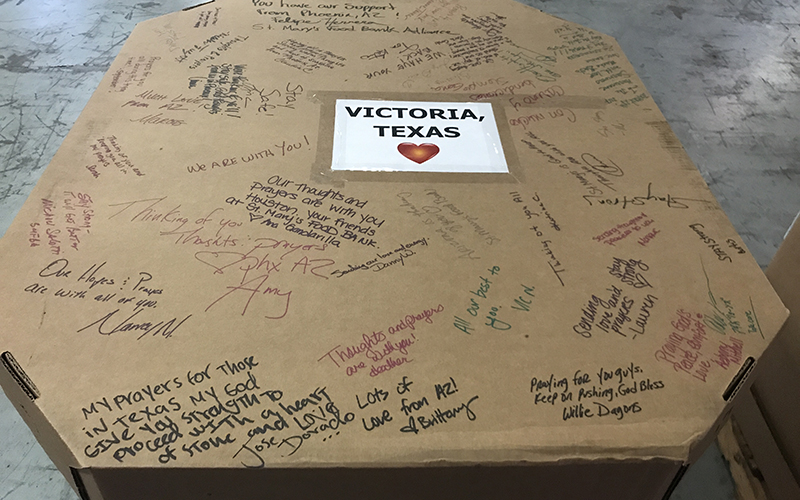 Food donation boxes waiting to be shipped to Texas at the St. Mary’s Food Bank warehouse in Phoenix. (Photo by Shawna Truong/Cronkite News) 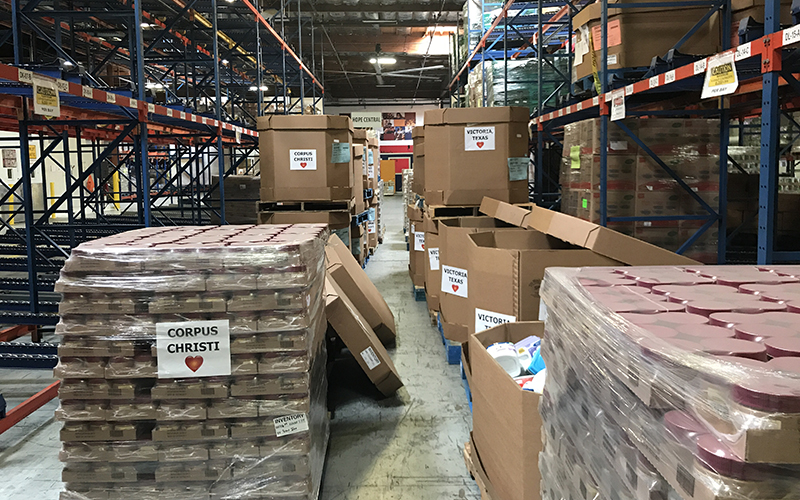 Donation boxes at the St. Mary’s Food Bank in Phoenix are categorized by destination, either Corpus Christi or Victoria, Texas. (Photo by Shawna Truong/Cronkite News)

Arizona chapters of the American Red Cross deployed nearly 100 volunteers. The Arizona Diamondbacks matched donations to bring its financial contribution to more than $245,000 by Thursday. St. Mary’s Food Bank sent a trailer truck packed with food and other groups are collecting clothing, blankets and other supplies.

With the #Dbacks matching contribution, an additional $245,856 will be donated to the Hurricane Harvey relief efforts. #HelpForHouston

“There are so many people out there that want to help,” said Scott Johnson, spokesman for the Salvation Army’s Southwest Division. “It really speaks to the human spirit and how we come together as a country in times of need.”

The work is just getting started, many said.

“I imagine the number keeps rising, we could hit even more than 100 later down the road,” said Danielle Rudolph, a volunteer services specialist for the Phoenix area chapter of the Red Cross. “We’re sending people very often.”

St. Mary’s Food Bank, the largest in Arizona, sent a truck loaded with “ready-to-eat meals and personal care items” to food banks in Texas that arrived, a spokesman said. A second truck was expected to be on its way by Sept. 2.

“With the current and forecasted weather still a major factor in Houston, the need for emergency items will continue in the coming days and weeks and St. Mary’s will respond as needed in any capacity, including relief items, transportation and food bank personnel,” spokesman Jerry Brown said.

St. Mary’s is collecting peanut butter, canned fruits and vegetables, pastas and one-pound bags of rice and beans to replenish their supply for the Phoenix community, he said.

“We’re going to be distributing 30,000 pounds of food to the relief victims in Texas so we need to replenish those supplies here at the food bank,” Brown said.

Thousands of Texans need help after Hurricane Harvey lashed Houston and other Texas communities. More than 450,000 people affected by floodwaters are expected to seek federal aid, according to The New York Times.

People are eager to offer aid. Nationwide, more than 700 applications an hour were coming into the Red Cross just after the storm hit, Rudolph said.

“What we advise most is going on to Redcross.org and donating financially to support the folks that are being sent out, as well as the community who do need the support most,” Rudolph said.

The after-effects of flooding in Texas will linger for weeks and months, so help will be needed for a long time.

Rudolph advised those who want to volunteer to sign up for the Red Cross training program, which lasts about two weeks.

“Our training process does depend on whether you’re going to be deployed out into Houston or stay here locally,” Rudolph said.

“We’ve been working on refining our responses and our support to these large-scale disasters during what we call blue skies,” Rudolph said. “When things aren’t happening we’re ready and getting prepared.”

Other organizations sending aid to Texas:

• World Care, a Tucson humanitarian group, has organized a supply collection at several places in the city. Locations and hours of operation are here.

• University of Arizona Athletics will be loading their football equipment truck “with hygiene products, cleaning supplies and diapers, and drive them to Houston” after a Sept. 9 game to southeast Texas, according to its website. They are accepting donations Sept. 3-8 on the east side of Arizona Stadium.

We invite our community to support Houston and fill our truck with donations to send to Texas.https://t.co/KTwuR7a0gC

• Arizona State University police will collect supplies through Sept. 30. They have four drop-off sites near ASU campuses. Spokeswoman Katy Harris said items need to be new. “If you’re bringing clothes they need to be in all sizes, from children’s to extra-large,” Harris said. “Also, bring new pillow, new blankets, new towels and cleaning supplies because once the water recedes the cleaning of houses and properties will start.”

• The Salvation Army nationwide is encouraging financial donations be made online or by calling 1-800-SAL-ARMY. Johnson said monetary donations at thrift shops will take longer to get to the disaster site. Donating money is better than sending supplies. “When you think about moving containers, packing and transporting the goods, that can cost more than the value of the goods,” Johnson said. “Plus, goods can almost always be purchased locally near the disaster site and the money being used to purchase those items can support local and state economies, which help businesses and workers who have suffered losses in the wake of the disaster.”

• Albertsons grocery is raising funds from shoppers that will go towards the Salvation Army, American Red Cross and other disaster relief organizations. The chain will match the first $200,000 donated. Grocery clerks will accept donations at any Albertsons-owned store, which include local Safeways, according to a news release.

This story has been updated since it was originally posted on Aug. 28.