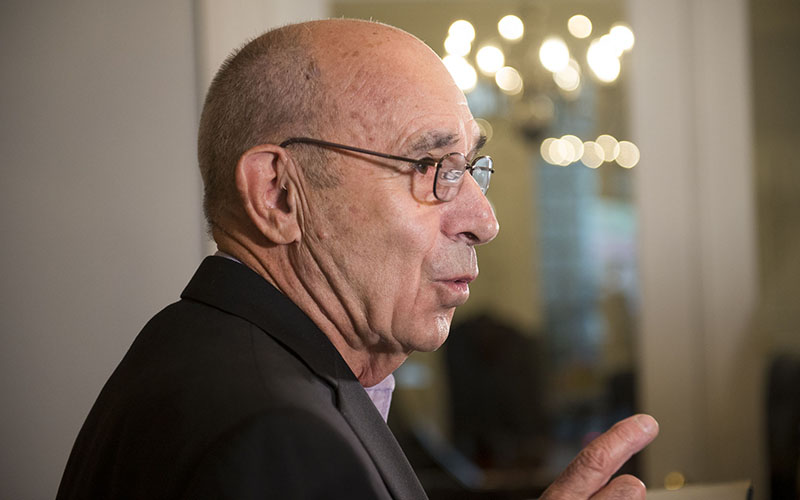 John Fer, 79, reminisces about his time as a fellow prisoner of war with Sen. John McCain, R-Arizona, during the Vietnam War. McCain was recently diagnosed with an aggressive brain cancer. (Photo by Ben Moffat/Cronkite News) 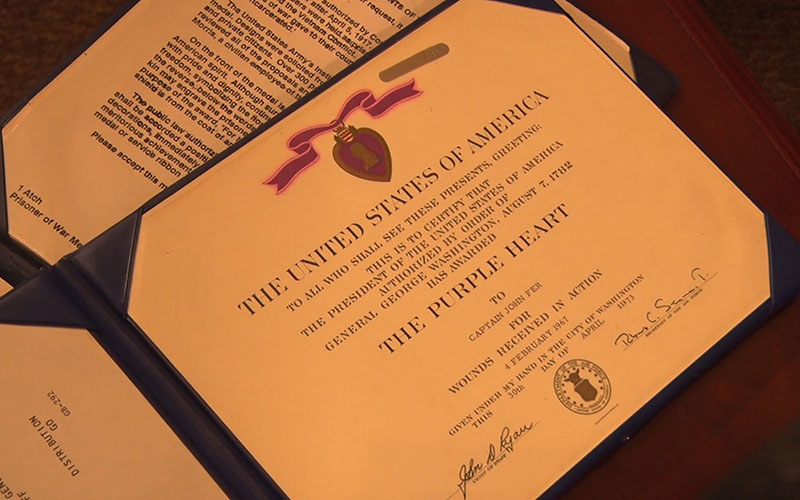 The Purple Heart that John Fer earned in Vietnam. Fer, who spent time as a prisoner of war with Sen. John McCain, R-Arizona, said he prays daily for McCain, who was diagnosed with brain cancer. (Photo by Noelle Lilley/Cronkite News) 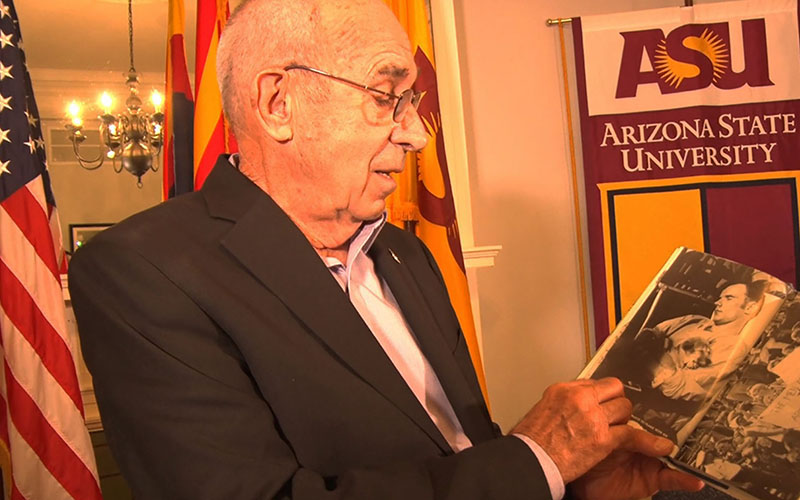 Retired Air Force Col. John Fer, who was shot down over Vietnam and held captive, thumbs through a scrapbook of the time when he was a fellow POW with Sen. John McCain, R-Arizona. (Photo by Noelle Lilley/Cronkite News)

WASHINGTON – When Sen. John McCain took to the Senate floor last week to lecture his colleagues about governing, it reminded John Fer of similar conversations he’d had with McCain – in a North Vietnamese prison.

Fer, a retired Air Force colonel who was a cellmate of McCain’s when both were held in Hao Lo prison, eagerly talked this week about the fighter he knew then, and his shock at hearing of McCain’s diagnosis with brain cancer.

“I was devastated,” Fer said, as he thumbed through old scrapbooks and talked about his hopes for his longtime friend. “I knew he had some problems with skin cancer and things like that in the past, but this, to me, was shocking.”

McCain was hospitalized two weeks ago for removal of a blood clot over his left eye, leading to the discovery of an aggressive brain tumor known as glioblastoma.

He was greeted with support and well-wishes from both sides of the aisle when he returned to the Senate last week to vote, but not before giving an emotional speech to his colleagues urging them to put aside partisanship and restore civility to the Senate.

After casting one of the deciding votes to block a repeal of Obamacare in the early hours of Friday morning, McCain returned to Phoenix where he was scheduled to begin “a standard post-surgical regimen of targeted radiation and chemotherapy,” according to a statement from his office.

That treatment was scheduled to begin Monday at the Mayo Clinic, but calls to the clinic and to McCain’s office seeking an update were not returned Tuesday.

Fer said that McCain’s speech on the Senate floor after returning to Washington reminded him of conversations they used to have in Vietnam, saying that he was talking about “a cause greater than your own self-interest.”

“That was vintage McCain,” Fer said. “We had a lot of conversations about politics, about military power, a lot about leadership.”

Fer, who was shot down in 1967, said that he met McCain a few years after his imprisonment in the infamous “Hanoi Hilton.”

“I met him, probably, in early 1971. That’s when we began the friendship,” said Fer, a Maryland retiree. “When I heard what the diagnosis was, it was like a ton of bricks hit me. It was horrible.”

Fer, “an eternal optimist,” said if anyone can overcome this cancer diagnosis it is Sen. McCain.

“Physical illness is, a great deal, dependent upon your mental outlook,” Fer said. “Your commitment with the knowledge that you can overcome this, and I really believe that John has committed himself to overcoming this disease.”

Fer said that he himself has committed to use “every day at my Mass to praying for John’s complete recovery.”

While he is in Arizona for treatment, McCain will still maintain a work schedule, his office said. He plans to return to the Washington following the August recess.

“The fact that he’s my friend, I’m going to devote a good portion of my prayer life to his recovery,” Fer said.