Sen. John McCain, R-Arizona, walks past reporters in the hallway outside his Washington office Friday, just hours after his early-morning vote helped kill the latest attempt by Republicans to repeal and replace Obamacare. (Photo by Ben Moffat/Cronkite News) 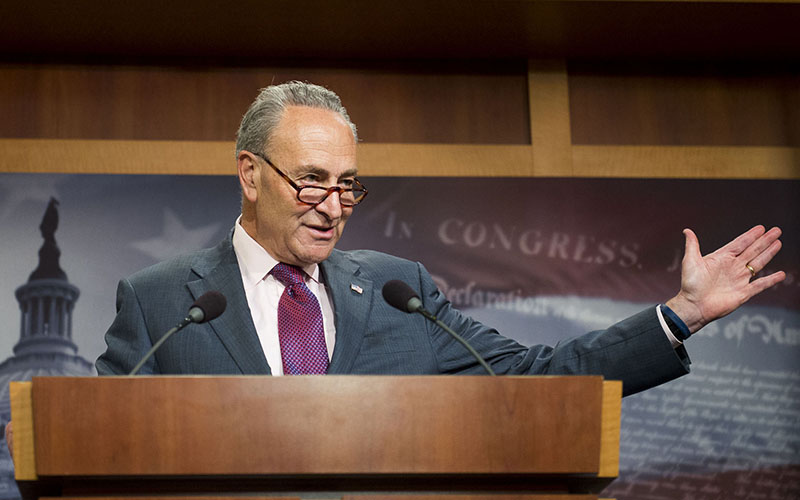 Senate Minority Leader Chuck Schumer lavishes praise on Sen. John McCain, R-Arizona, at the Capitol, just hours after Democrats, with the help of McCain and two other GOP senators, beat back an attempt to repeal Obamacare. (Photo by Ben Moffat/Cronkite News) 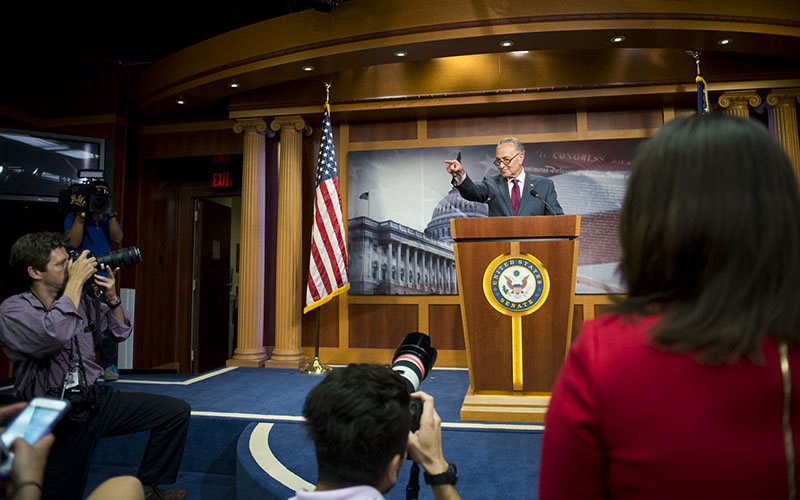 Senate Minority Leader Chuck Schumer said Sen. John McCain, R-Arizona, showed the same courage in bucking his party with his “no” vote on Obamacare repeal as he did as a Navy pilot who was shot down over North Vietnam. (Photo by Ben Moffat/Cronkite News) 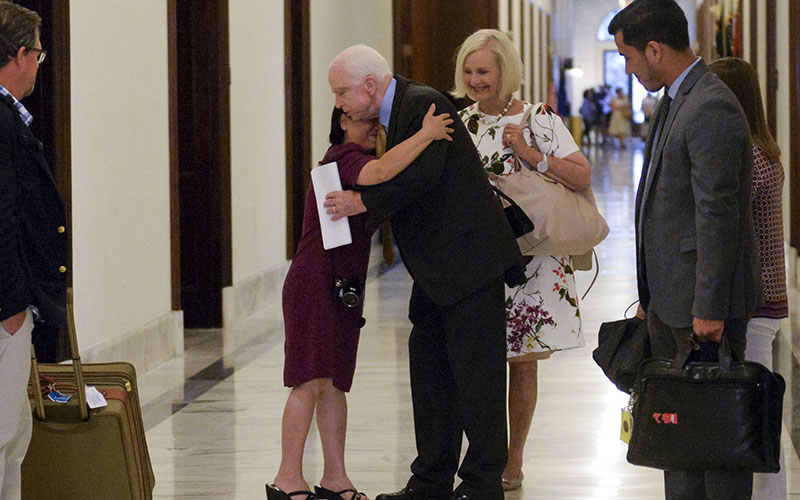 Sen. John McCain, R-Arizona, gets a hug from Genie Giao Nguyen, who came to wish him a speedy recovery after his a brain cancer diagnosis, and urge him to speak out against Chinese actions in the South China Sea. With McCain is his wife, Cindy. (Photo by Ben Moffat/Cronkite News)

WASHINGTON – Sen. John McCain’s decision to buck his party early Friday and vote against a GOP plan to repeal Obamacare was both hailed as an example of “amazing courage” and derided as “betraying his conservative constituency.”

The Arizona senator joined Republican Sens. Lisa Murkowski of Alaska and Susan Collins of Maine to vote against a plan to repeal select parts of the Affordable Care Act. Those three gave Democrats just enough votes to kill the bill, 49-51, and preserve Obamacare.

McCain’s vote elicited a gasp from the Senate chamber when he cast it after 1 a.m. Friday, capping weeks of failed efforts by Republican leadership to craft a repeal-and-replace bill.

However they felt about the vote, many agreed it was a return to form for the man who made his name as a maverick.

Senate Minority Leader Chuck Schumer showered McCain with praise later Friday morning. He said the vote displayed the “very same courage he showed as a naval aviator in Vietnam” to resist his party and vote with Democrats in a night he called a “magic moment.”

“I’ve not seen a senator who speaks truth to power as well as John McCain,” Schumer said in a news conference, in which he called McCain an old friend.

Washington Times columnist Cheryl Chumley said the vote was just more evidence of what she called his “leftist leanings.” Chumley, noting that McCain was recently diagnosed with an aggressive brain cancer, wrote that Friday’s vote will let him “spend his dying days in open friendship with the Democrats he so loves.”

“I think McCain had nothing to lose by voting with the Democrats and betraying his conservative constituency because A) he’s dying from brain cancer and B) he knows his political career is coming to an end,” Chumley said. “What can anyone do to him?”

It was during his emotional return to the Senate after his diagnosis that McCain called on his fellow lawmakers to stop partisan fighting and return to “regular order,” holding hearings and compromsing on legislation. Obamacare was “rammed through” by Democrats in 2010, he said, and he vowed to vote against a GOP plan that did the same thing this year.

Getting rid of Obamacare has been a goal of the GOP since the law was enacted in 2010, and President Donald Trump campaigned on a pledge to make repeal happen. Congress passed repeal legislation before, but it was vetoed by then-President Barack Obama.

Since taking control of both the executive and legislative branch, however, Republicans have not been any more successful.

The House passed its version of an Obamacare alternative, the American Health Care Act, and sent it to the Senate in May. But efforts by Senate Republicans to push their own bill stalled in the face of a split between conservative and moderate wings of the party, and solid opposition from unified Democrats.

Weeks of maneuvering by GOP leaders behind closed doors led to Thursday’s debate – which dragged into an early-morning Friday vote – on a so-called “skinny repeal.” It left some of the Affordable Care Act in place but eliminated the requirement that individuals and businesses have insurance or pay steep fines, among other changes.

Vice President Mike Pence was on hand to vote in the event of a 50-50 tie, and Murkowski and Collins had already voted “no” when McCain walked into the chamber and approached the dais. He raised his right arm toward the clerk and sharply turned his thumb down.

The gesture appeared to shock Democrats when they realized they had wrested a 51-49 victory, and left Republicans silent and stunned.

While lawmakers appeared surprised in the moment, one Republican analyst said Friday that it is exactly how he expected McCain to vote.

“One of the primary rules of lobbying is when you don’t know how someone’s going to vote … they’re usually not with you,” said Jason Rose, a
Scottsdale-based consultant. “That certainly played itself out last night.”

Unlike Arizona Republican Sen. Jeff Flake, who faces re-election in 2018, McCain had little to risk. He does not face re-election until 2022, should he choose to run again.

“Look this is a senator that, prior to the health announcement, was not very likely to run for re-election,” Rose said. “And now (McCain) has no one to answer to but God.

“There wasn’t a single Republican who enthusiastically voted for that legislation yesterday,” Rose said. “So I don’t know why we would be surprised that someone would take a principled stand, and say not only is the bill garbage but the process that was undertaken was not great either.”

Schumer described McCain as someone “blessed with an internal gyroscope of right and wrong” and cited McCain’s speech to the Senate earlier this week as a call to both sides to come together on enacting new legislation.

“We long for it,” Schumer said. “We yearn to work together.”