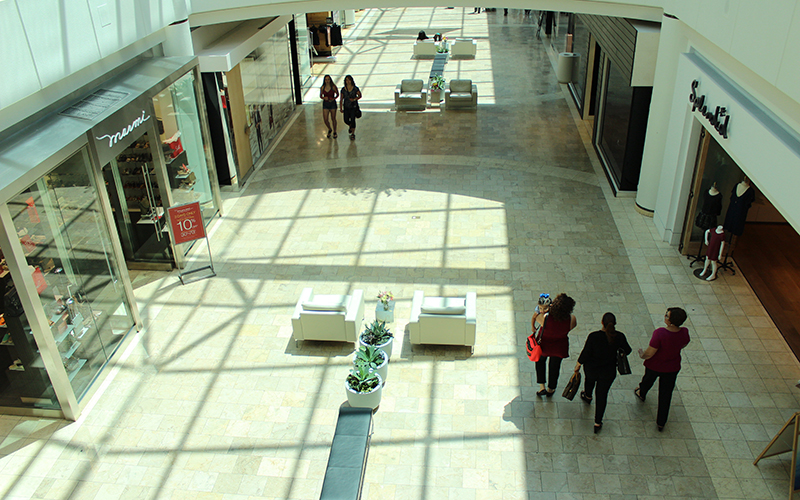 Marble tiles, granite accents and glass chandeliers are part of a “floor to ceiling” renovation that will finish by next year, mall executive Scott Nelson said Thursday.

The plan is to immerse shoppers in an experience more akin to entertainment than just buying goods and services, he said.

“We don’t think of ourselves as a retail property but as an entertainment industry,” Nelson said.

The renovations come as malls are buffeted by the increasing popularity of online shopping, whether a comprehensive site like Amazon or stores’ websites.

One out of two U.S. households have Amazon Prime accounts, according to reports, giving them access to goods ranging from clothing and electronics to basics such as groceries and cleaning supplies.

Amazon, which is on the hunt for physical stores to supplement its online offerings, may move into Fashion Square, according to Kim Choukalas, a Fashion Square leasing agent.

Fashion Square also is banking on some customers’ preference for an in-person experience. About 75 percent of teens and millennials prefer to do their shopping in person, according to a Pew Research Center report.

Ohio resident Delanee Nilles, who was shopping at the Scottsdale mall on Thursday, said “it’s easier to shop in person and I like it better.”

“The only reason I don’t as much is because I live an hour away from the closest one,” Nilles said.
Choukalas said the fall 2018 opening of the newly renovated mall will prove Scottsdale Fashion Square’s retail staying power.

“People are always going to see shopping as an entertainment,” Choukalas said. “We’re a vibrant business and we’re investing heavily in it.”