More than 37,000 crowded into University of Phoenix Stadium for two Gold Cup quarterfinal matches last week, marking the third time in as many summers the Valley has successfully hosted a major international soccer tournament.

“Events like the Gold Cup and Copa America last year really indicate how passionate people here in the Valley are for soccer and how they’ll come out to watch soccer,” Phoenix Rising spokesman H. José Bosch said. 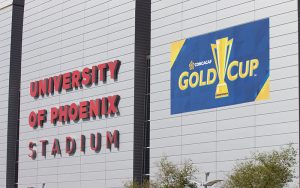 University of Phoenix Stadium hosted the Gold Cup for the second time in three years. (Photo by John Arlia/Cronkite News)

In 2015, University of Phoenix Stadium hosted the Gold Cup, which crowns the continental champion of North America, Central America and the Caribbean. Last summer, it drew more than 60,000 fans for a match between Mexico and Uruguay in Copa America Centenario, the 100-year anniversary of South America’s premier international tournament.

Phoenix’s recent history of hosting high-profile international soccer matches has given Phoenix Rising confidence that the Valley is ready to have a team in MLS, America’s top level of professional soccer.

After placing a bid for an MLS expansion franchise in January, the club has been trying to prove that Phoenix should be one of two new cities that will join the league in 2020. MLS commissioner Don Garber is expected to make a final decision on expansion sometime this year.

“MLS has considered Phoenix to be an attractive soccer market for many years,” MLS deputy commissioner Mark Abbott said in a January statement. “In fact, we visited Phoenix and toured potential stadium sites 13 years ago, including the site recently secured by Phoenix Rising FC within the Salt River Pima-Maricopa Indian Community in South Scottsdale.”

Phoenix Rising already has built a temporary 6,200-seat soccer-specific stadium on that site and sold it out all but one of its eight United Soccer League home games so far this season. The club, which features high-profile stars like Didier Drogba, Shaun Wright-Phillips and Omar Bravo, plans to build a bigger venue if the MLS comes calling.

Rising officials hope that those factors, along with Phoenix’s large Hispanic and millennial populations, will convince the MLS that it’s finally time to award a franchise to the largest city in the United States that doesn’t currently have one.

“I think it’s time for us to have our own MLS team,” said Gabriel Sanchez, a 27-year-old Tempe resident who supported Mexico at the Gold Cup. “It’s a huge Hispanic population and we love soccer. I think it’s evident with the support the team has been getting.”

Nearly 30 percent of the Phoenix Metropolitan area’s 4.2 million population was Hispanic as of the 2010 Census Bureau.

Sanchez, a long-time soccer fan, is no stranger to the Phoenix Rising Soccer Complex as his two siblings are season-ticket holders.

“I’ve been to most home games,” Sanchez said. “They’re great. They’re very exciting and I’ve enjoyed every game I’ve been to.”

Phoenix Rising has focused on building its brand and growing its fan base, which made the opportunity to work with the Gold Cup too good to pass up. 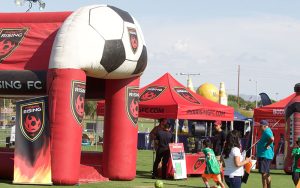 Bosch said the team worked with Soccer United Marketing (SUM), the leading integrated marketing partnership company for MLS, the Gold Cup and the U.S. Soccer Federation. SUM works with local professional teams in cities that host the event to build awareness for the tournament.

That partnership turned out to be mutually beneficial for Phoenix Rising, which helped host a pregame “Football Fiesta” at University of Phoenix Stadium, exposing the club to international soccer fans gathering for the games.

“Any time you have events like these, it’s great to get out there and try to reach fans.” Bosch said. “You know you’re going to see passionate soccer fans out here, so just having the chance to connect with them is an excellent opportunity for us to really get in touch with the big soccer fans here in the Valley.”

Bosch believes that the strong showing of support at the Gold Cup is just another sign that Phoenix is more than capable of supporting an MLS team.

“We’ve told everyone that will listen how great of a market Phoenix is for Major League Soccer and we can point at all different levels, ” Bosch said.

“You look at the youth level, we have a couple of teams from a couple of our local youth programs that are going to nationals,” Bosch said. “You start to go up the ranks, (Premiere Development League) level, FC Tucson is playing in the playoffs. Above that, you have FC Arizona who are playing in the (National Premiere Soccer League) playoffs, you have us who are doing very well right now and then you go up to the international level.”

After drawing crowds of more than 60,000 people to matches at the 2015 Gold Cup and last summer’s Copa America Centenario, the attendance of 37,000 plus for this year’s Gold Cup might seem underwhelming, but the smaller crowd can be attributed to the decreased importance of this year’s tournament.

In 2015, the Gold Cup winner earned an automatic invite to the Confederations Cup, an eight-team World Cup warm-up that features the host nation, the previous World Cup winner and each continent’s reigning champion.

This year’s Gold Cup winner will be recognized as the top team in North America, Central America and the Caribbean, but will not earn any additional honors or guaranteed tournament invites.

The United States takes on Jamaica in the championship Wednesday at Levi’s Stadium in Santa Clara, California.

The lack of incentive and less star power in this year’s tournament didn’t stop some dedicated fans like Juan Rodriguez from coming out to support his team.

Rodriguez drove six hours from El Paso to Glendale to support Mexico in its match against Honduras. He was impressed with the atmosphere around the venue, especially given the absence of Mexico’s all-time leading goal scorer, Chicharito Hernández, among others top players.

“It’s heavily Mexican, obviously,” Rodriguez said of the crowd. “But it’s kind of cool because you do have your Honduras fans here, too. You get the whole spectrum. It’s high-energy.”