CHANDLER — People who walk into Tough Lotus for the Bungee Workout class often have the same reaction.

The bungee workout is a new fitness routine that originated in Thailand about two years ago and is springing into gyms around the country. The workout combines aerial fitness, dancing, core workouts, aerobics and toning.

The harness used in the workout look like one from a rock climbing gym. The bungees, suspended from the ceiling, pull on students as they perform exercises that resemble sequences from an action movie.

“We were both studio trained, competitive dancing from the time we were four and two,” Gillian Grabowski said. “So we grew up dancing and this isn’t like any other workout we’ve ever done. This is even harder than dancing, I think. There’s a lot more core and…”

“… You use different muscles,” her sister Allison, said. “My legs are still shaking.”

When Paige first saw the video of the bungee workout in Thailand, she fell in love with it. A sign in her gym says, “Master Training Center, 1st in the United States.”

“I called them. I said, ‘Hey, how do I get this out here?’ I flew to Thailand, I spent two weeks out there (and) became a master trainer,” Paige said. 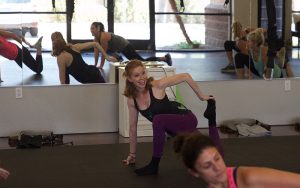 Amanda Paige goes through the pre-stretch workout routine with her students. (Photo by Reinert Toft/Cronkite News)

“I always tell them, ‘You’re going to feel a little lift.’ So, I hook it onto their lower back and they go ‘ooooh,’ ” Paige said.

Once the harnesses are on, the students do squats and pushups. Paige also has them walk and lean forward in the harness to have them engage their core muscles.

All of the little steps are meant to teach the students an important lesson when doing the bungee workout.

“You have to think about it this way: The bungee cord, its job is to pull you up to the ceiling,” Paige said. “So it’s pulling you up so your job is to pull it down.” 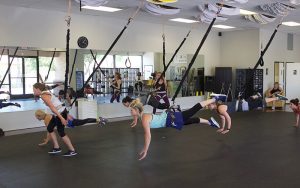 In order to be successful in pulling off the moves in the class, a 100 percent effort is required or the bungee will take control, Paige said.

She has her workouts follow the flow of upbeat songs like “Sweet Dreams” by the Eurythmics, “I Can’t Get No Satisfaction” by the Rolling Stones and other songs that she plays during the class.

Ever since Paige brought the workout to the United States, she has received non-stop calls from people trying to open bungee workout studios.

“I was very grateful, because when I purchased this studio it was an aerial studio so it was rigged for aerial work,” she said. “So, it was very easy installation for me but for most, it’s pretty important. (People) came in from Las Vegas to rig this. It’s all professionally done. It’s not just your traditional ceiling. There’s a lot to it.”.

Paige is hoping to expand the bungee workout program. There are more advanced dances like the vertical wall, which also involves a harness, but the class is able to utilize more of a room, including running and bouncing along walls, flying higher for longer periods of time and being able to perform flips.

“When we get a bigger location, then we can add that vertical wall and do that but right now we don’t have the space for it here,” Paige said. “It’s fun though. I did it when I was out there.”

Additionally, Paige is planning on opening a new bungee workout classes to cater to a wider audience.

Paige also has in mind a class for those who are older or injured who need to go at a slower pace, and a bungee workout for kids.

For those that aren’t used to being active, Paige advises building up endurance before participating.

Her requirements for the class are still simple.

“If you can go for a walk or a run or whatever, come on give it a try.” 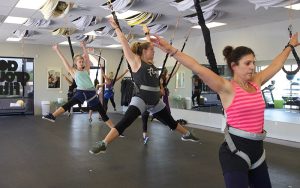