Both are on a mission to learn more about urban heat.

Eventually, their work could reveal ways to improve how cities are designed.

“Our goal with this research is to help us better understand the relationship, specifically here in Phoenix, between the surface temperatures in the urban areas and the air temperature,” said Peter Crank, a doctorate student at Arizona State University.

He and his counterpart on the ground collected air- and surface-temperature data within the same space, at the same time, in a Valley neighborhood. Imagine an invisible column of data connecting Crank, in a helicopter, to his colleague, Mary Wright, thousands of feet below.

The goal: to determine the differences between air temperatures and corresponding surface temperatures such as rooftops, sidewalks, fields and the sides of buildings.

Crank, of the Urban Climate Research Center, said the studies on how urban heat flows show how people and objects, like cars and buildings, affect heat.

Crank said every little bit adds up to heat. It’s not something people can change but it plays a part in their research.

“We could see that there are major issues with the way we are designing our cities. If we were to restructure that it would have a drastic impact,” Crank said.

Crank said developers, architects and engineers could create a way to live in the desert that is more comfortable, sustainable and affordable as cities continue to grow. 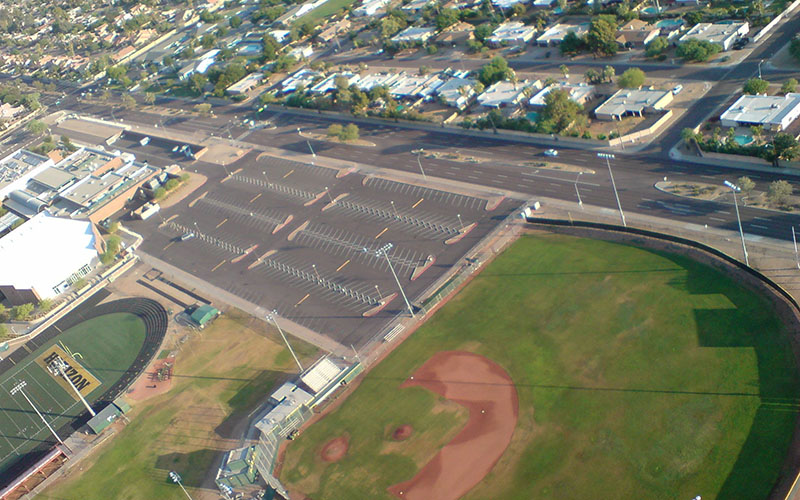 A series of small changes could collectively lead to a significant decrease in the effects of urban heat islands.

“I think it is important that we really understand what is going on with all of that so that we can address it,” said Wright, another doctorate student.

The research, at its essence, reveals the connections among the atmosphere, nature and people.

“The best thing about this is simply being able to understand the environment around us,” Crank said.

He plans to finish some of the research by November, then conduct more research on a larger scale next summer.