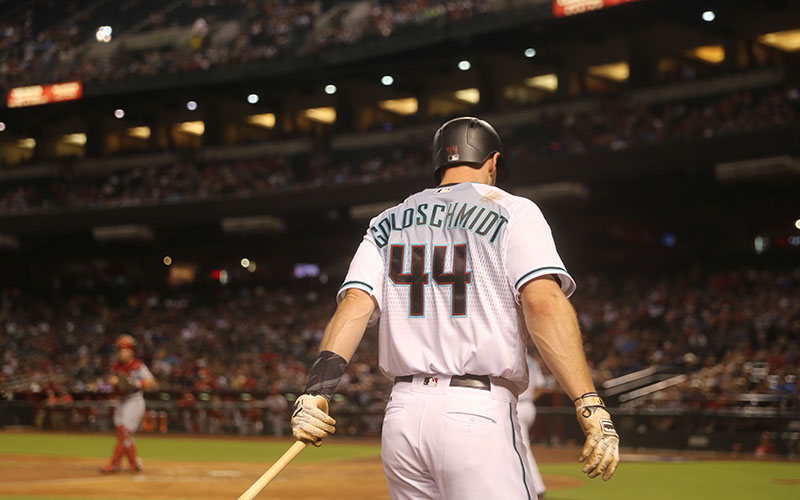 Arizona Diamondbacks first baseman Paul Goldschmidt waits to bat against the Cincinnati Reds on July 7, 2017. Goldschmidt will be attending his fifth all star game. (Photo by Asia Walters/Cronkite News) 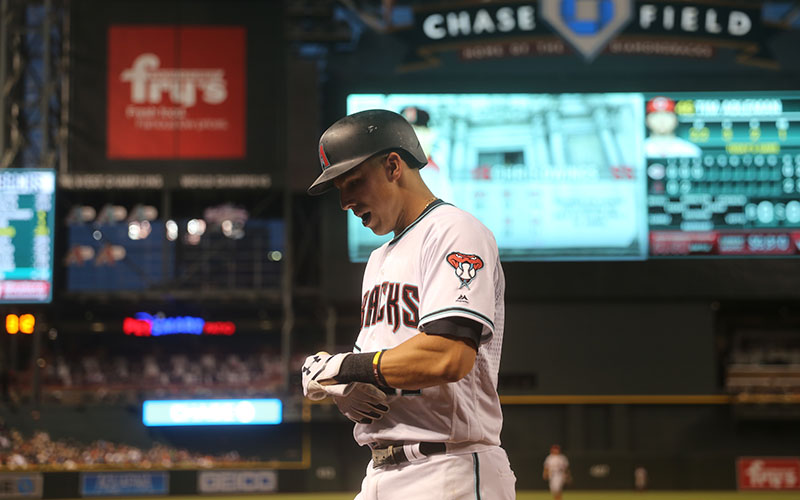 Diamondbacks ace Zack Greinke will be attending his fourth all star game. It will be his first as a Diamondback (Photo by Asia Walters/Cronkite News)

“We’ll all be able to enjoy it together,” Goldschmidt said. “You know, they’re not just random teammates for me, they’re all guys that I’m really close with off the field.”

The four selected for the Diamondbacks are the most for the team since 2002, when they sent six to the Midsummer Classic in Milwaukee.

After falling short in the final vote in 2016, Lamb will be making his first well-deserved All-Star appearance. At the break, the left-handed hitting third baseman is tied for the team lead in home runs (20) with Goldschmidt and is also tied for third in RBIs in the NL with 67.

Well on his way to posting career-best numbers, Lamb led the NL in RBIs for much of the first half and is relieved to be making his first trip after falling short last season.

“I had my plans all ready to go back to Seattle… I kind’ve assumed after last year,” Lamb joked. “I was telling everyone, it’s nice to cancel those plans now. I’m excited.”

Starting pitcher Robbie Ray will also be making his first All-Star appearance. The hard throwing left-hander has already matched his career high in wins (eight) and is third in the NL in strikeouts (141) behind only Clayton Kershaw and Max Scherzer.

Ray arrived on the scene for the Diamondbacks in 2017 and put together a historic stretch during May and June, assembling a scoreless streak of 27.2 innings — third-longest in Diamondbacks history.

Much like Lamb, Ray is excited for the opportunity but more so to be sharing the experience with his teammates.

“It’s an awesome, awesome experience,” Ray said. “To be included with these guys, we have such a great group of guys here. Just to be able to represent the team and go to the All-Star Game is awesome.”

No stranger to baseball’s All-Star festivities, first baseman Goldschmidt will be making his fifth consecutive All-Star appearance. He’s now tied with Luis Gonzalez and Randy Johnson for the most in franchise history.

Greinke is also familiar with All-Star weekend and will be making his fourth appearance and first as a member of the Diamondbacks. He’s been a dominant arm at the top of the starting rotation and is tied for second in the NL with 11 wins. He’s also third in the league with a 2.86 ERA and fourth-best with 141 strikeouts.

Goldschmidt is once again putting together an MVP-caliber season for the Diamondbacks. He’s hitting .312 and is tied for the team-lead with Lamb in both home runs and RBI.

Having been selected as the sole representative for Arizona in 2016, the 29-year-old is happy to have company this year and to be able to share the experience with newcomers Lamb and Ray.

“For me personally, I’m excited for Zack but also for Jake and Robbie,” Goldschmidt said. “To get to go for your first time, I think about that and how exciting it was. Those guys deserve it and for each of us individually we’re happy, but to be able to go with three other guys makes it that much more special.”

Even though none of Arizona’s four representatives were selected through the fan vote, the excitement certainly hasn’t escaped them. For first-time selection Ray, he remains humble about the opportunity.

“Everyone is there for a reason,” he said. “It’s definitely going to be a challenge but it’s going to be fun.”

Not only will the experience bring them closer together but it also represents friendship and family alike for the four.

“Knowing how much fun I’ve had every year and knowing that them and their families too will all get to enjoy it is very exciting,” Goldschmidt said.