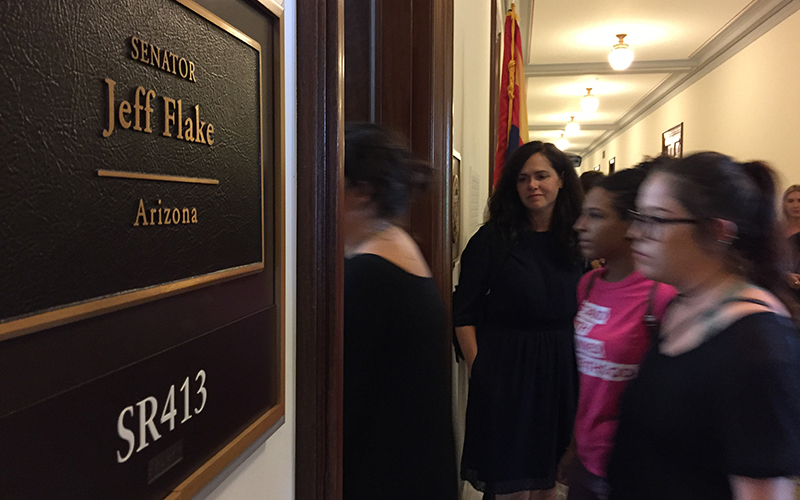 Protesters file into Sen. Jeff Flake’s office where they spent about 20 minutes sharing their opposition to a Senate health care bill before heading out to demonstrate in the hallway, where several were later arrested. (Photo by Megan Janetsky/Cronkite News) 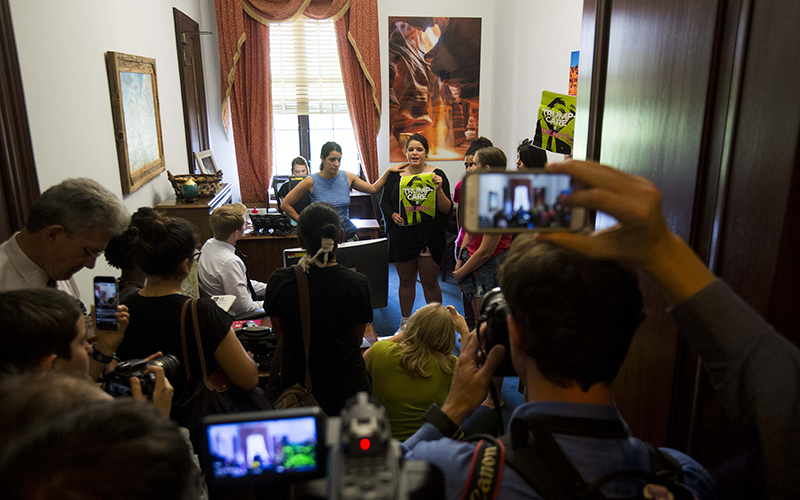 Protesters take over the Capitol Hill office of Sen. Jeff Flake, R-Arizona, one of several lawmakers who are being targeted by opponents of a Senate proposal to replace the Affordable Care Act, better known as Obamacare. (Photo by Ben Moffat/Cronkite News) 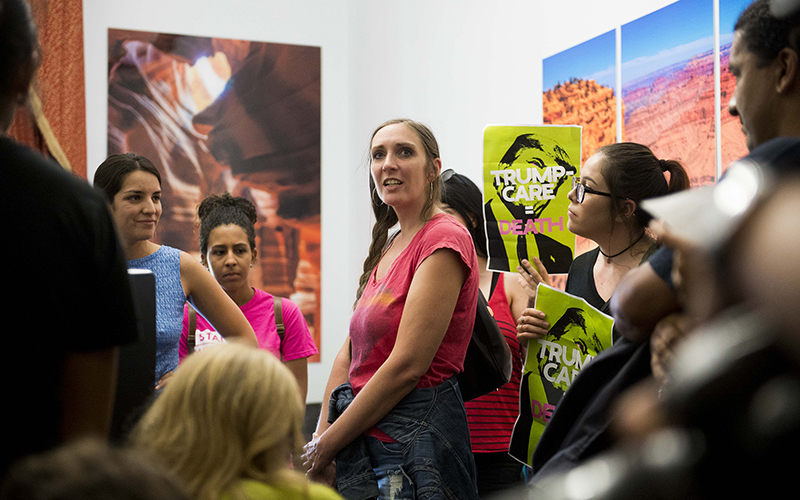 Lauren Klinkhamer of Tucson speaks during the protest in Sen. Jeff Flake’s Capitol Hill office. Klinkhamer said she has 16 chronic medical conditions, but fears the current Senate plan to replace Obamacare will cost her her health insurance. (Photo by Ben Moffat/Cronkite News) 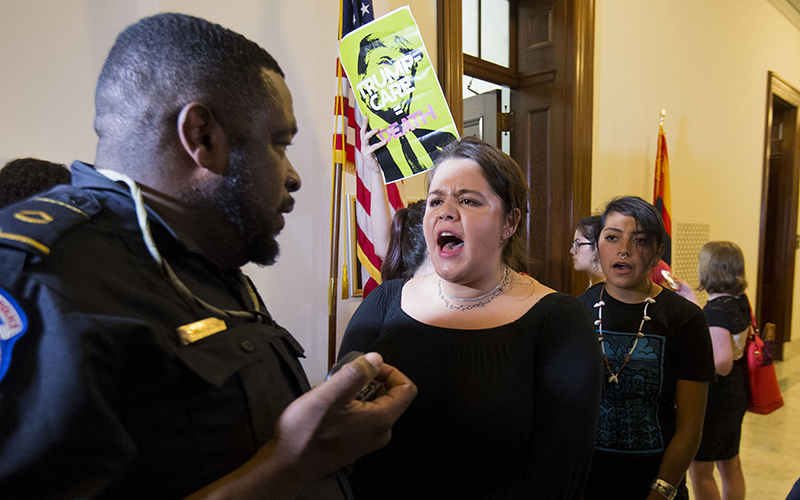 Andrea Coronado faces off with a U.S. Capitol Police officer outside Sen. Jeff Flake’s office during a protest over the Senate’s proposed health care bill, a measure that critics say will cost millions their health coverage if enacted. (Photo by Ben Moffat/Cronkite News) 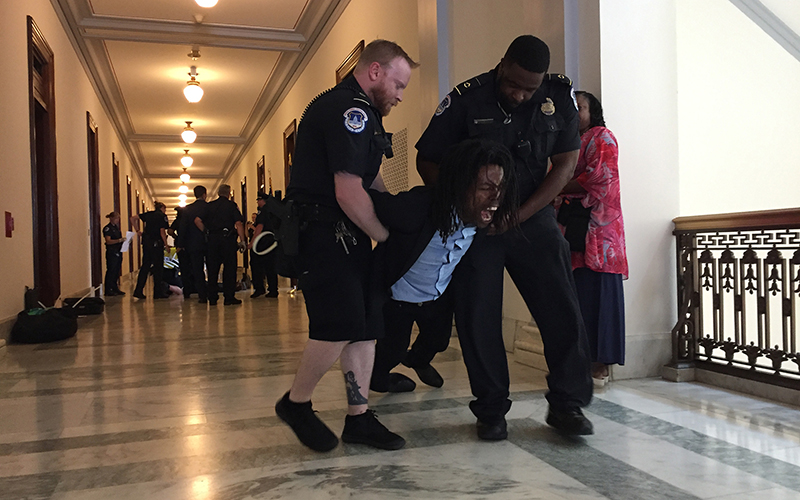 A man who was protesting outside the office of Sen. Ted Cruz, R-Texas, yells “Trumpcare kills” as he is dragged out of the Russell Senate Office Building by Capitol Police. Several offices, including Flake’s and Cruz’s, were targeted by protesters. (Photo by Megan Janetsky/Cronkite News) 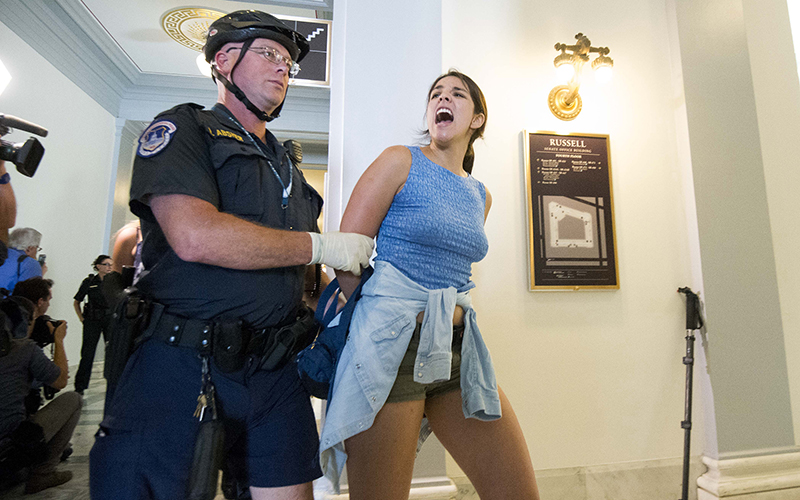 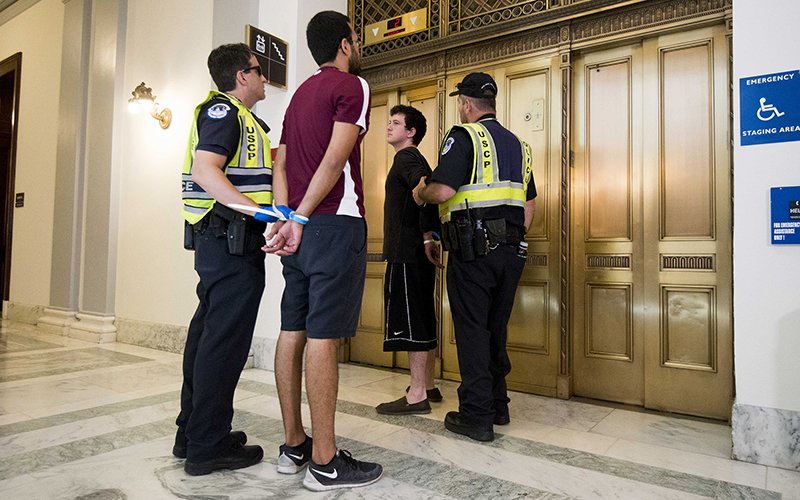 Organizers estimated that five to 10 protesters from Arizona were arrested during the demonstration outside Sen. Jeff Flake’s office, part of the 80 protesters total who were arrested at House and Senate offices by U.S. Capitol Police. (Photo by Ben Moffat/Cronkite News)

WASHINGTON – As calls of “Trumpcare kills” and “health care is a human right” echoed through the halls of Capitol office buildings Monday, Lauren Klinkhamer stood quietly in Arizona Sen. Jeff Flake’s office and told staffers, “I don’t want to die.”

The Tucson resident fears she would be among the 22 million Americans, and as many as 400,000 Arizonans, who would lose health care under a bill the Senate is considering to replace the Affordable Care Act. For Klinkhamer, who said she suffers from 16 chronic conditions, losing her coverage would be a death sentence.

“This isn’t something extra, this is our lives, you know?” Klinkhamer said before the protest began. “We’re literally asking our senators, ‘Please don’t kill us.'”

Klinkhamer was one of about 150 protesters – 18 from Arizona – who turned out at congressional offices Monday, sharing their medical stories and risking arrest in an effort to sway certain members of Congress, including Flake.

The Arizona Republican, who was on a flight back to Washington during the protest, has been the focus protests at his Washington and Phoenix offices in recent weeks, targeted as one of a handful of Republicans up for re-election next year.

Flake has not said how he will vote on the bill. His office reissued a statement from last week, in which he said he was still waiting to see a revised version of the Senate bill, but that his decision would ultimately be based on two factors: The bill must be “fiscally sustainable” and “needs to ensure that those who currently have coverage do not have the rug pulled out from under them.”

In that statement last week, Flake thanked protesters who descended on his Phoenix office for sharing their stories. It was much the same in his Washington office Monday, where a staff member appeared to listen as protesters like Klinkhamer spoke, while other protesters and reporters packed the office.

The Arizona group was part of a larger protest organized by the Center for Popular Democracy, which said 150 protesters fanned out to 15 House and Senate offices Monday.

The Arizona protesters, organized by Living United for Change in Arizona, showed up at Flake’s office around 2 p.m. They spent 20 minutes in the office, holding neon green signs reading “Trumpcare = Death” as members took turns sharing their stories while others chanted.

The protest then moved into the hallway of the Russell Senate Office Building, where about 10 sat down and started chanting. Their calls bounced off the marble halls and mingled with chants from another group of protesters shouting “shame” outside the office of Sen. Ted Cruz, R-Texas.

After 10 to 15 minutes, U.S. Capitol Police moved in and told the protesters that they would be arrested if they did not stop. They didn’t, and police cuffed and arrested a number of the protesters, who police said were charged with counts of crowding, obstructing or incommoding.

Capitol Police said they arrested 80 protesters in total, but did not provide a number for Arizonans who were arrested. LUCHA organizers estimated Monday evening that five to 10 of their group were arrested.

Samantha Coronado was the first of the Arizona protesters to be lead out of the building by police, hands cuffed behind her back.

“Arrest is nothing compared to losing our medicine or losing family members,” said Coronado, who organized the Arizona protesters and lead the chants. “I think that’s why we’re all out here.”

They were protesting the Better Care Reconciliation Act, a Republican-crafted plan to replace the Affordable Care Act, or Obamacare.

The GOP has said for years that Obamacare was driving up premiums and forcing people off health care. Critics like President Donald Trump often pointed to states like Arizona, where premiums rose 116 percent and numerous insurers pulled out of the state last year, after several years of rising coverage.

But critics say the Senate bill, and a similar version passed by the House, would result in at least 22 million losing coverage over the next 10 years, with most of those losses coming in the first year. The Senate plan would reduce the federal deficit by $321 billion by 2026, according to the Congressional Budget Office, but would do so by cutting Medicaid funding and shifting more costs to states.

Even though she was too sick to risk arrest, Klinkhamer said it was critical for her to come to Washington and deliver the message that, “We have the right to not die because of legislation.”

She said she was lucky to be mobile enough now to come here and advocate for others like her, who could be severely affected but are not well enough to represent themselves.

Klinkhamer, who spent years trying to get disability coverage, said she does not think she can go through that struggle again if she lost her coverage.

“Multiple times I’ve wanted to die, like seriously worried about killing myself because I can’t do it again – I can’t,” Klinkhamer said, crying as she reflected on years of trying to get coverage.

“It was hell what I went through – you have no idea what I went through waiting so long – It changes you forever,” she said before the protests. “I can’t do it again. I remember writing friends saying, ‘Please kill me, I can’t kill myself.’ I can’t do this again; I don’t know why they’re doing this.”