Protesters last month waved at traffic outside Sen. Jeff Flake’s office, one of several protests aimed at pressuring the Arizona Republican to vote against a Senate GOP plan to replace the Affordable Care Act, or Obamacare. (Photo by Devin Conley/Cronkite News) 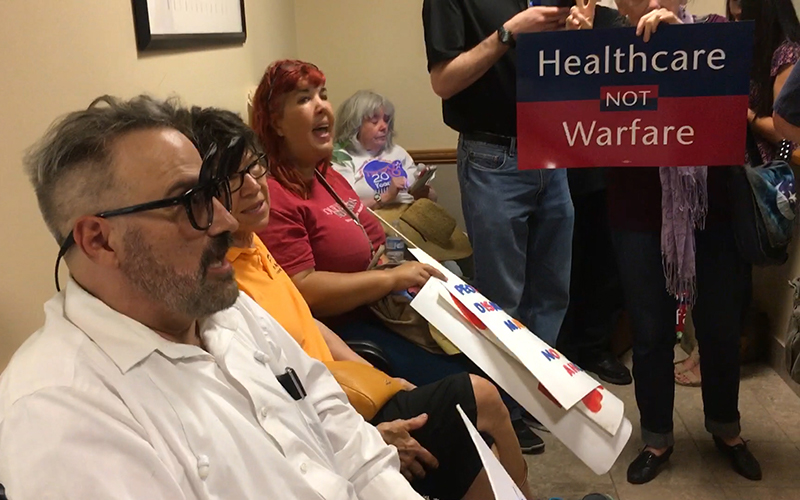 Advocates this week protested inside the Phoenix office of Sen. Jeff Flake, R-Arizona. Flake, one of a handful of Republican senators up for re-election in 2018, has been targeted by national and local groups over the health care vote. (Photo by Devin Conley/Cronkite News)

WASHINGTON – When protesters descended on Sen. Jeff Flake’s office this week to demand that he vote against the Senate’s health reform bill, it was just the latest in a campaign by local and national groups to pressure the Arizona Republican.

Flake, one of just eight Republicans up for re-election next year, is among a handful of GOP senators targeted by national groups that are aiming to kill the Senate plan to replace Obamacare.

Flake has not given any indication how he will vote on the bill that could be scuttled with as few as three Republican votes against it, making him a prime target. By comparison, Arizona Republican Sen. John McCain is not up for re-election until 2022 and has not faced such heavy pressure.

“It’s no secret that the Democrats consider Sen. Flake one of the more vulnerable senators in the country up for re-election in 2018,” said Jason Rose, a Republican political consultant in Arizona. “So they are embarking on a rather formulaic approach to try and make nervous those they think should be nervous.”

That is exactly what opponents of the health care bill are thinking, with one critic noting that lawmakers “tend to be a bit more sensitive to the concerns of their constituents” when re-elections near.

“The bill that the Senate is currently considering would have some pretty dramatic impacts for a lot of Arizonans,” said Katherine Howitt, director of policy at the Community Catalyst, a nonprofit that advocates for affordable health care. “This isn’t what they asked for and this bill is going to have such a wide-ranging impact on so many different constituencies. I think that’s why we’re seeing such a dramatic response.”

That response included protests outside Flake’s Phoenix office last month and protests inside the office this week. National groups have taken out ads targeting Flake, like the Democratic Senatorial Campaign Committee’s 30-second online spot that tries to link him to “spiked costs and stripped coverage for hardworking families in his state” that it says the GOP measure would bring.

In a statement Thursday, Flake thanked protesters for “coming and sharing your stories.” Flake staffers noted that they let protesters sit in the Phoenix office for eight hours Wednesday, “so it’s something we’re prepared to accommodate.”

Flake’s Thursday statement went on to say he had not seen a revised version of the bill, but his ultimate “decision will be based on how it balances two principles.”

“The first is that the legislation needs to ensure that those who currently have coverage do not have the rug pulled out from under them. The second is that the Senate must agree on a solution that is fiscally sustainable,” said Flake, who promised to keep constituents’ comments in mind on the bill.

The Senate bill, the Better Care Reconciliation Act, is an attempt to make good on Republicans’ longstanding pledge to do away with the Affordable Care Act – better known as Obamacare.

Democrats say Obamacare has allowed millions of Americans to get health coverage but Republicans say it has limited options and driven up costs so that health insurance is unaffordable for many. Critics often point to Arizona, where insurance premiums under Obamacare rose 116 percent last year, the biggest increase in the nation.

But Republican proposals in the House and the Senate have come under fire by opponents who say the measures would strip millions of coverage. Their arguments appeared to be supported by the Congressional Budget Office, which said the Senate bill would cost at least 22 million people their coverage in the next 10 years, with most of those losses coming in the first year. As many as 400,000 in Arizona could lose coverage, critics claim.

The CBO said the Senate bill would reduce the federal deficit by $321 billion by 2026, by shifting Medicaid costs to states and cutting federal funding. But that cost-shifting would leave the state of Arizona responsible for as much as $7.1 billion in Medicaid funding, according to estimates from the Arizona Health Care Cost Containment System, which runs the state’s Medicaid program.

The House passed its version of the bill in May. But a vote on the Senate bill was postponed last week after concerns from both conservative and moderate Republicans as well as universal condemnation from Democrats in the Senate.

Senate leaders have said they hope to have a vote on the bill before Congress leaves for its August recess. If all Democrats oppose the bill, as expected, they would only need to be joined by three Republicans to get the 51 votes needed to kill the measure.

But constituents aren’t waiting for the vote.

“For weeks we have been calling, writing, faxing and visiting his offices with our own stories of how we and our loved ones are personally affected by this issue,” said Nicole Girard, founder of Indivisible Phoenix.

Regardless of the amped-up efforts to pressure Flake, Rose said he thinks the senator will make the decision on his own.

“Jeff Flake is not the kind of guy that flakes out on his own principles, no matter how many television ads are being run against him and phone calls that he’s getting,” Rose said.

“He may have problems with the bill that I think are real and that many conservatives have, but ultimately I don’t think it’s politics that would get him to move his position on the issue,” he said. “I think it’s policy.”