The Sheriff’s Office, Department of Public Safety and Phoenix Police Department have hundreds of vacant law enforcement positions each. They will join forces at a job fair this weekend.

Cindy Scott, an associate clinical professor of Justice Studies at Northern Arizona University, said this emergency hire has been a long time coming. Because of the economic downturn, agencies could not hire employees. Agencies faced budget cuts and hiring freezes within an eight-year period, and the departments couldn’t keep up with the attrition rate.

Since the departments hired most of their employees in the 1980s, those officers are ready to turn in their badges, making more room for new officers.

But many departments don’t just plan to simply replace officers. They need more resources to keep up with population growth as well. 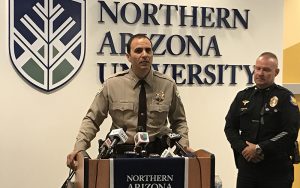 The department has 2,888 sworn filled positions, and it’s trying to fill 365 spots now and get to 400 by the end of the year. Lee said Phoenix needs patrol officers.

Supervisors have to to pull officers – and sometimes detectives – away from assignments to perform patrol duties.

He said the department has struggled to maintain traffic duties, such as responding to accidents and enforcing speed limits. Lee said that just a couple years ago, the department had 165 patrol officers working with nighttime traffic, and now that team has decreased to 25.

Lee said patrol is the department’s “bread and butter,” and right now, it is their core mission.

Lee also said diversity is important to the department.

“(Diversity) allows us to build that trust and legitimacy, almost from the beginning because with people we’re hiring make up the community that they’re going to be working in,” Lee said.

NAU, which has about 500 students in its law enforcement program, has partnered with the agencies for a career fair from 10 a.m. to noon Saturday at NAU’s North Valley Campus, 15451 N. 28th Ave. in Phoenix.

“What we try to do at NAU is support the field, and one way we could do that is bring these three great leaders together and the reach the community to hire from within,” Scott said.

In March, Phoenix Police Chief Jeri Williams released a statement on Facebook indicating the latest crime reports show a rise in violent crime in the city, although burglary-related crimes have dropped.

Williams’ statement noted that Phoenix plans to grow to 3,125 sworn officers by next year. The department has implemented new recruiting efforts to seek applicants outside the state, focusing on military bases and college campuses, her post said.

At the news conference, DPS Director Frank Milstead said one of the main reasons departments have struggled with recruiting lately is because “there’s been a lot of negativity around law enforcement.” But he said officers are trying to do their best.

“We’re your neighbors,” he said. “Our kids go to school with your kids … We go to the same Costco you do. We’re just regular people who have a servant mentality. If you have that servant mentality and you want to give back to your community, you want to be part of building a stronger, safer Arizona.”