The Congressional Budget Office analysis of a Senate GOP plan to replace Obamacare said the bill would lead to 22 million people losing, or dropping, their health care. (Photo by Eric Staszczak-KOMU/Creative Commons) 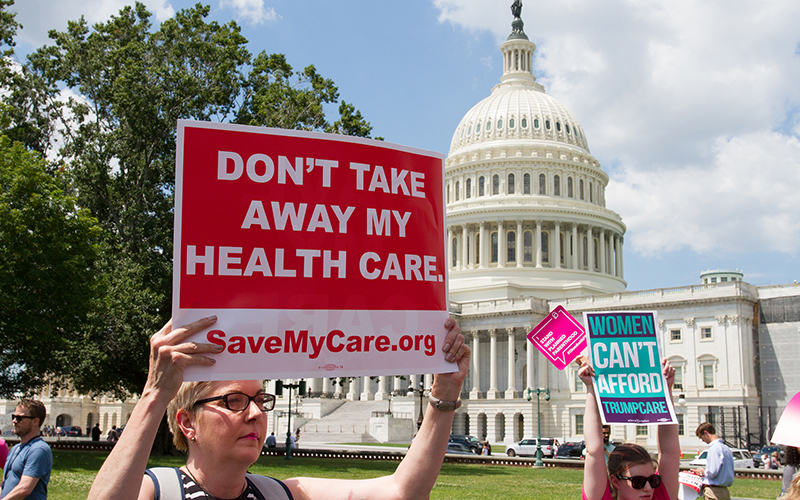 Protesters opposed to the Senate Republican plan to replace Obamacare made their feelings known at a rally last week at the Capitol. (Photo by Nathan J. Fish/Cronkite News)

That estimate, only slightly less than the House 23 million that the CBO said would be affected by the House bill, was quickly seized on by opponents of the GOP plan.

“This bill would be nothing short of a disaster for Arizona,” said DJ Quinlan, a spokesman for the Arizona Alliance for Healthcare Security, who said it would cost more than 400,000 Arizonans lose their coverage.

Over half of those would be uninsured within the first year, primarily due to the Senate bill’s call to eliminate the insurance coverage mandate that was part of the Affordable Care Act, better known as Obamacare, according to the CBO report.

The CBO “score” also said that the Senate bill would reduce the federal deficit by $321 billion by 2026, compared to a reduction of $119 billion for the House version.

The White House quickly criticized the report, questioning the CBO’s accuracy in previous estimates on the impact of health care legislation. The administration noted that in 2013 the CBO estimated that 24 million people would have coverage under Obamacare within three years, but fewer than 11 million actually wound up with coverage in that time frame.

“This history of inaccuracy, as demonstrated by its flawed report on coverage, premiums, and predicted deficit arising out of Obamacare, reminds us that its analysis must not be trusted blindly,” the White House statement said of the CBO.

But Sen. Jeff Flake, R-Arizona, said he plans to “thoroughly review” the CBO analysis as part of his review of the bill.

Neither Flake nor fellow Republican Arizona Sen. John McCain, have said how they will vote on the bill, which Senate leaders have said they hope to have a vote on by the end of this week. The measure will fail if a handful of Republican senators oppose, as the minority Democrats are all expected to vote against it.

McCain said the CBO report is “obviously not good news” for the bill, which he said should not be rushed.

McCain said last week when a draft version of the bill was released that he planned to study the bill and talk with Arizona voters and Gov. Doug Ducey before making up his mind.

Ducey’s office has not returned calls seeking comment on the plan, but a report last week by the Arizona Health Care Cost Containment System, the state’s Medicaid office, estimated that the Senate bill could cost the state as much as $7.1 billion through fiscal 2026.

Critics of Obamacare, including McCain and Flake, have argued that something needs to be done. They point to last year’s 116 percent increase in premiums in Arizona, the highest in the nation, as proof that the Affordable Care Act is not working.

The CBO said the GOP plan would lead to a slight rise in premiums next year, but by 2020 would lead to a reduction in premiums of about 30 percent for benchmark plans for single individuals. It would also sharply reduce Medicaid spending, shifting some of these costs to states.

But health care providers in Arizona said the Senate plan was no better than the House plan, which they also opposed, and that the CBO report affirmed their suspicions.

“The Senate health care proposal will result in 22 million people losing health coverage, while leading to markedly higher premium costs for older Americans. The Arizona Hospital and Healthcare Association cannot support this legislation unless significant changes are made to protect Arizona’s patients, people and communities,” association President and CEO Greg Vigdor said in a statement Monday.