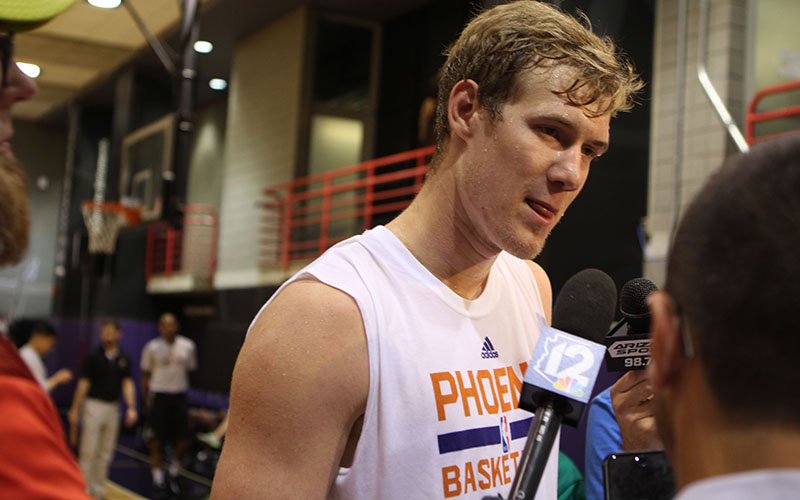 Tim Kempton Jr. speaking with media after the completing workout with the Phoenix Suns. (Photo by Jose Esparza/Cronkite News) 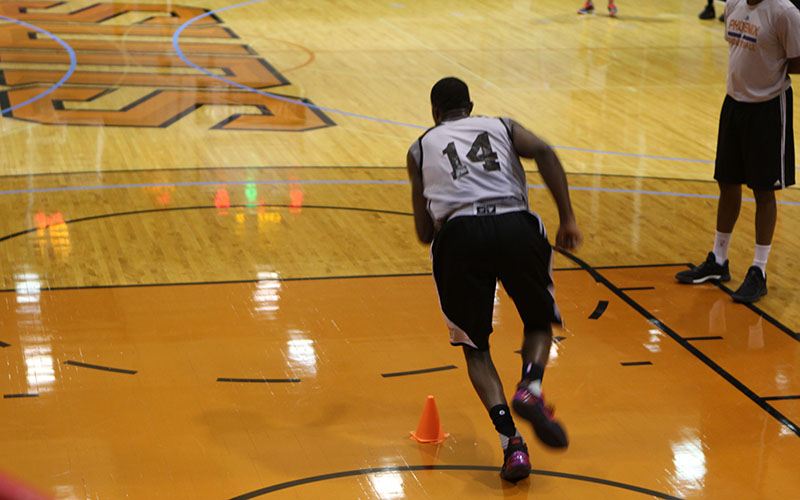 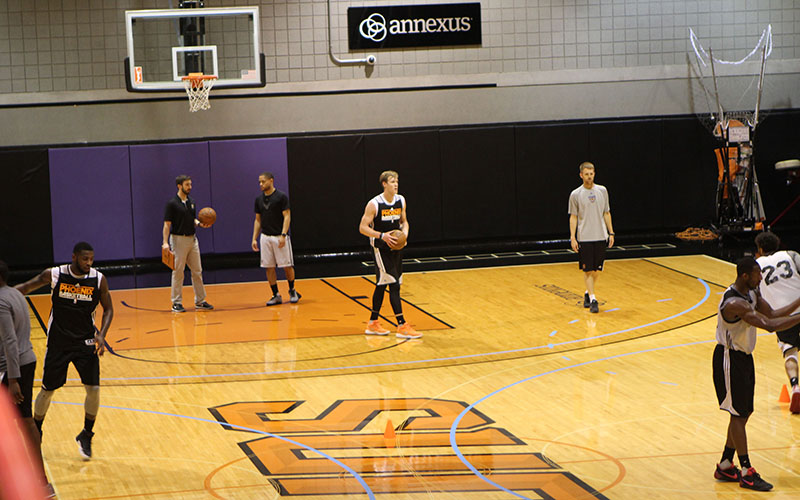 “He had a very checkered past,” former Suns owner Jerry Colangelo said about Amar’e Stoudemire. “Not a very stable home condition. He went to a number of different high schools.”

But after putting the player through multiple workouts and attending dinners and a Diamondbacks game with him, Colangelo “made my mind up on the spot that I wanted him.”

Stoudemire went on to be the centerpiece of an exciting era of Suns basketball. Colangelo’s instincts paid off and spoke volumes about the importance of NBA draft workouts and interviews.

“It’s like speed dating so you get a quick feel. (You) sit there and talk with them,” said assistant Suns general manager Pat Connelly. “(Just) trying to get a general sense of what they are about, what their family is like, what they like to do.”

High draft picks have been a common occurrence for the Suns in the last decade. They have the fourth overall pick in next week’s 2017 NBA Draft, and two in the second round, and have hosted a handful of pre-draft workouts this summer.

Among those who have participated include Kentucky’s Malik Monk, Gonzaga’s Zach Collins and Oregon’s Jordan Bell.

The Suns selected several future All-Stars in the past but traded their rights away. In 2004, they drafted Luol Deng and send him to the Chicago Bulls. In 2006, they drafted Rajon Rondo and traded his rights to the Boston Celtics.

Devin Booker, who the Suns drafted in 2015, could see an All-Star Game appearance in the near future.

The Suns would be thrilled to land another Booker, or even Stoudemire, who intrigued Colangelo after the former Suns owner saw him in the McDonald’s All-American Game.

“Watching him perform he was so strong physically. He had so much going for him,” he said.

Colangelo called Stoudemire “a man among boys. I said to our staff, ‘Bring him in. I want to see this player. I want to talk to him and I want to just get to know him.’ ”

Of course, it’s not easy determining who will be a future All-Star. The team has had only two draft picks since 1997 (Stoudemire and Shawn Marion) make an All-Star team as a representative of the Suns.

“The selection of draft picks is the life and blood of professional sports franchises, ” Colangelo said. “What you try to do is eliminate as much risk as possible.”

What are teams looking for in a draft workout?

“I like to believe that I can see a lot through one’s body language whether a player can really communicate and look you in the eye and not get distracted,” Colangelo said. “Let the player talk if he’s willing to talk and it goes a long way.”

It is about more than basketball. Teams often take prospects to dinner and have long interviews with them. They want to learn what players like to do off the court, what their families are like and how committed they are to the sport.

Sometimes teams can overanalyze. One of the reasons then-Suns general manager Lance Blanks passed on Kawhi Leonard in 2011 was was because of “how nervously he acted in a draft combine interview, when he sweated through his suit,” Paul Coro wrote for the Arizona Republic in 2015.

“There is a human element of evaluation that is probably the hardest part of our job, just trying to figure it out in a real quick process,” Connelly said.

It is also a difficult process for draft prospects.

“It’s a grind. It’s not an easy task,” said Lehigh center Tim Kempton Jr. after concluding his workout with the Suns. “You are waking up and working out in Phoenix one day, hopping on a plane tonight and staying in a hotel room and waking up 7:30 the next day.”

Kempton is not expected to be drafted, according to NBADraft.net, and is a player, like many others, that needs to take advantage of the workouts.

“Mentally, it’s the hardest part having to wake yourself every morning with the same ‘go get them’ mentality and just trying to seize the opportunity every day,” Kempton said.

Other players, like UCLA’s Lonzo Ball, will participate in only a few workouts. For players like Syracuse’s Andrew White, who had completed nine workouts before working out for Phoenix, he is just trying to capitalize on his moment.

“It’s good to get that interest from teams. I try to work that out in my schedule so I can be there,” the forward said. “The more opportunities you have, the better chance you have to be what you want to be.”