The video boards were behind them.

When they return to that same student section on August 31 against New Mexico State, they will be able to watch close plays on a new 5,400-square-foot video display behind the north end zone.

“It’s going to be a pretty cool viewing experience if you can see the scope of how big this board is and being in that atmosphere when it’s game time,” said Alex Flaig, project manager for technology company ANC.

It will be the 10th largest college video board in the country. Its dimensions barely edge Arizona’s board that went up in 2011.

The structure that holds the video board is 180 feet wide by 60 feet tall, or the equivalent of a six-story building.

The video display installation is the second phase in the overall renovation of Sun Devil Stadium. Work on the east side of the stadium to create new main and upper concourses and a sideline club will be the third and final phase.

“The video board had always been a major element in the reconstruction and re-envisioning of Sun Devil Stadium, so this has been on the books since Day One,” said Isaac Manning, the project representative for Sun Devil Athletics on the project.

Due to Arizona’s unique environment, the brightness of the video board has been increased to 9,500 nits, a unit of measurement for visible-light intensity.

Computer monitors typically measure at 100 nits of brightness, while televisions measure at 400 nits.

Compared to other outdoor video displays ANC has constructed, Sun Devil Stadium’s new one will be about 3,000 nits brighter.

This board, Flaig said, required unique design elements “to help mitigate the reflective effect of the sun.” An enclosure behind the display containing 48 high-powered AC units will also help with the intense heat.

“The in-game experience is becoming more important because the at-home big screen and second-screen experiences are improving every day and fans have more options than ever before,” Sun Devil Athletics Chief Operating Officer Rocky Harris said. “Having one of the Top 10 largest video boards in collegiate athletics will set us apart.”

ASU and ANC have partnered since 2009. ANC was also responsible for the two video displays on the south side of the stadium and the video display in Wells Fargo Arena. 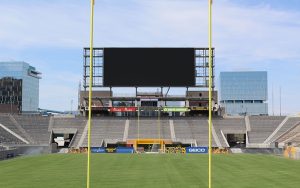 Fans of Arizona State Football who come to football games will now enjoy the sight of a video display behind the north end zone. (Photo by Reinert Toft/Cronkite News)

Structural changes to the north side of Sun Devil Stadium were required to accommodate its size.

“If you had been out here 18 months ago … we were down to raw dirt and basically started over,” Manning said. “The structure of the video board was all part of the building spec.”

The student-athlete facility has also been moved to the north side of the stadium, as well as the stadium’s iconic feature, the Tillman Tunnel.

The video board display is expected to be operational by mid-July.