Marchers hoist a rainbow flag over their heads before the start of the Equality March in Washington to celebrate LGBT Pride Month. (Photo by Megan Janetsky/Cronkite News) 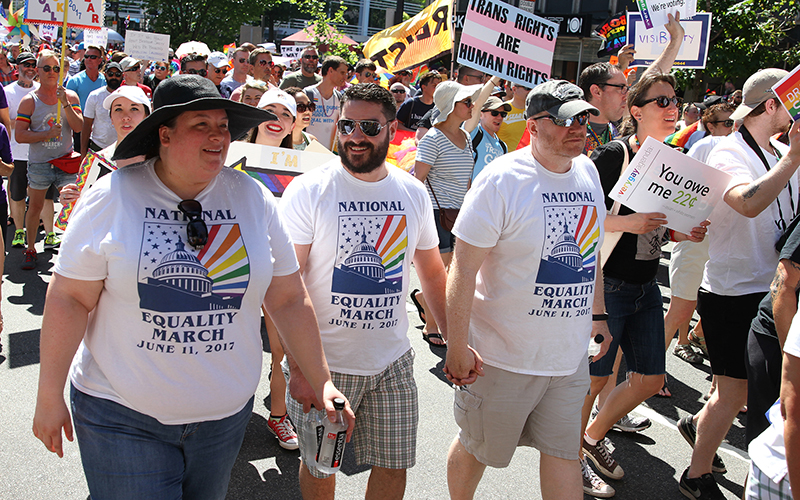 Marisa Tristan, left, a Phoenix resident who has long been an LGBT advocate, marched with friends as part of the Equality March in Washington. (Photo by Megan Janetsky/Cronkite News) 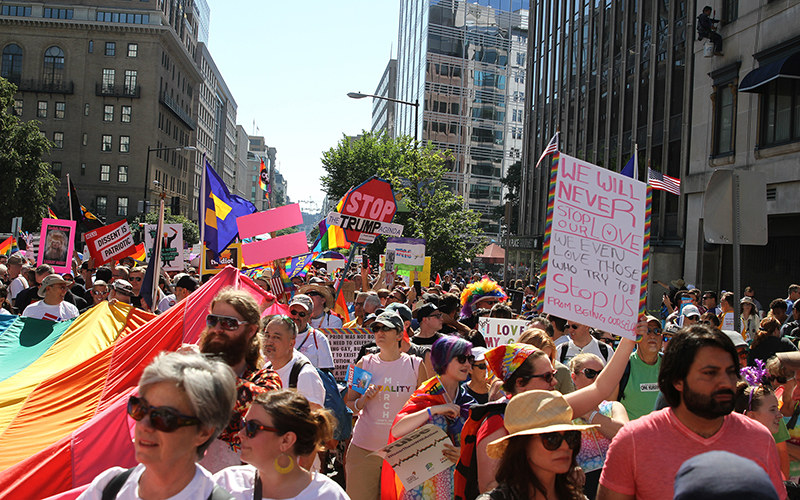 Organizers said they expected tens of thousands for the Equality March through Washington Sunday in support of LGBT rights. (Photo by Megan Janetsky/Cronkite News) 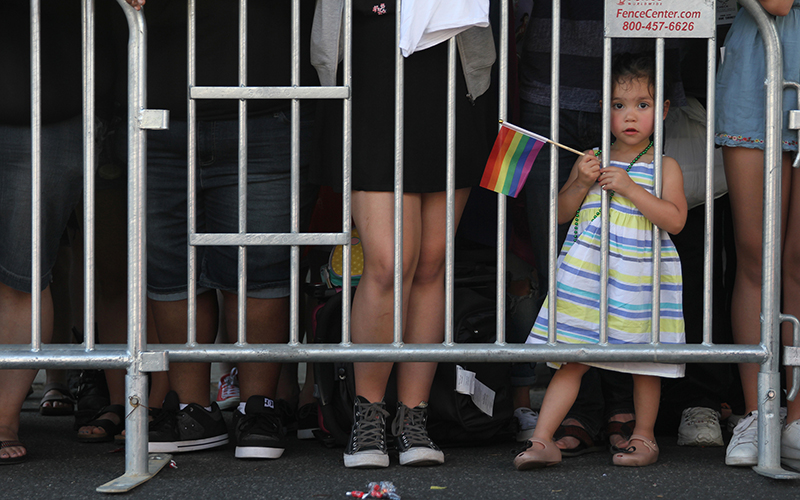 A little girl holds a rainbow flag Sunday while her family watches the 2017 Pride Parade pass by on the to the Capitol in Washington. (Photo by Megan Janetsky/Cronkite News) 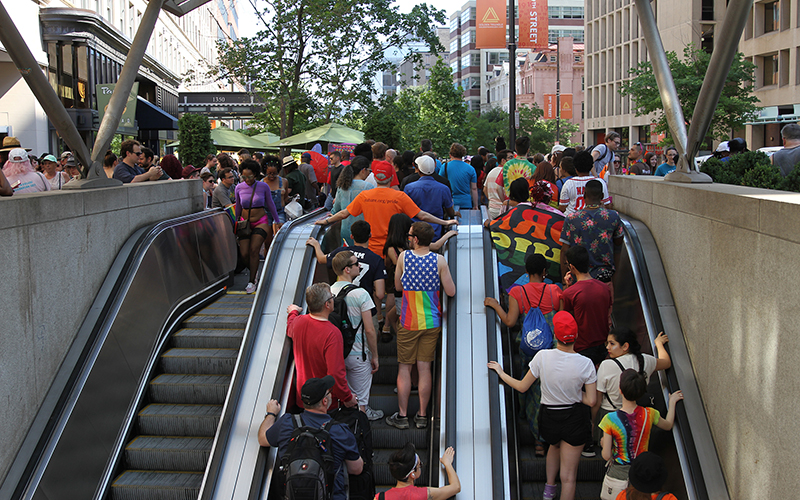 Throngs of people file out of the Dupont Circle Metro station Sunday on their way to the start of the 2017 Pride Parade in Washington. (Photo by Megan Janetsky/Cronkite News) 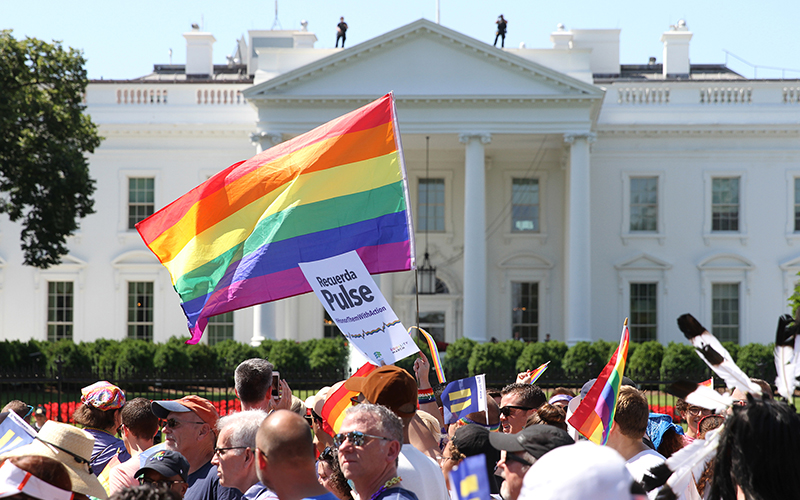 Some of the thousands who took part in the Equality March as part of Pride Month walk past the White House on Sunday. (Photo by Megan Janetsky/Cronkite News) 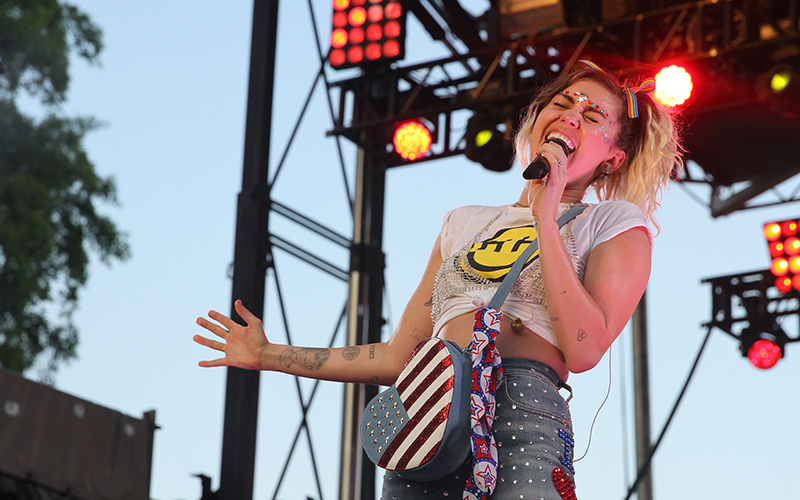 Marchers who made it to the end of Sunday’s march in support of LGBT right were treated to a concert by Miley Cyrus on the Capitol grounds. (Photo by Megan Janetsky/Cronkite News)

WASHINGTON – Marisa Tristan has long been an advocate for LGBT rights, but she never felt the need to march in Washington before this year.

But the Phoenix resident joined tens of thousands this weekend who marched for national Pride Month – a month, they noted pointedly, that was recognized by presidents for the last 20 years until this year, when President Donald Trump snubbed it.

“It’s really important to be here and stand together as Americans and as LGBT (lesbian, gay, bisexual and transgender) community members and supporters,” Tristan said, “to stand here because of the political climate we’re currently in, where people are trying to push hate.”

Throngs of marchers snaked past the White House to the Capitol Sunday waving signs and rainbow flags, the centerpiece of the weekend’s Pride celebration here that aimed to “address concerns about the current political landscapes.”

The swell of colors and chants that made up Sunday’s march came in response to what advocates call a variety of hostile policies from the administration.

Those include Trump’s reversal of President Barack Obama’s policy requiring protections for LGBT individuals in federal contracting and Education Department decision to reverse another Obama-era policy that said transgender students should be allowed to use facilities and be called by pronouns aligning with their gender identity.

“It was really that motivation of feeling like we’re threatened right now as a community, that there are people who are trying to undo current protections,” Tristan said. “It’s just people trying to chip away at the rights that people have fought and died for.”

Trump is also first president since Bill Clinton who has not acknowledged LGBT Pride Month.

But one Arizona group that advocates for religious liberty said the “government has no business” passing laws that it said can ultimately infringe on religious beliefs.

“These laws and ordinances invariably lead to the government to censoring and coercing citizens (who) don’t want to be forced to participate in events or expressive speech that violated their deeply-held convictions,” said Bob Trent of the Scottsdale-based Alliance Defending Freedom.

But Steve Kilar, communications director for the American Civil Liberties Union of Arizona, said there have been “significant rollbacks on rights for gay and transgender people since Trump became president.”

“We don’t want to lose the very important rights that we’ve gained over the past few years,” said Kilar, who was in Washington handing out “Resist” signs before the march. “It’s a real fear that we are going to lose those protections during the Trump administration.”

Despite their fears, both Kilar and Tristan said they have seen massive strides in terms of LGBT acceptance, in the U.S. and in Phoenix.

In its 2016 scorecard on protections for LGBT citizens, the Human Rights Campaign ranked Phoenix, Tempe and Tucson to its list of “All-Star Cities.”

“We have a mayor that’s open to treating everyone as equals, we now have marriage equality in Arizona,” Tristan said. “It’s been a huge change.”

Tristan began advocating for LGBT rights in 2008 after California Proposition 8 – since overturned – temporarily barred gay marriage in the state, halting plans of Tristan and her now-wife to get married on the beach in California.

“My heart broke that night,” Tristan said. “I felt like my home state was telling me I didn’t matter, that I wasn’t good enough to get married. That I wasn’t valued as an individual, as a human.”

She started volunteering in Arizona and leading a variety of initiatives in the state. She now hosts an LGBT wedding-planning business.

While Phoenix, Tempe and Tucson ranked highly in the Human Rights Campaign report, other parts of the state did not fare as well. Kilar said there is still room to improve, citing Scottsdale, where he has personally faced pushback from elected officials.

“It’s shocking to me the lack of understanding some elected officials have in their inability to put themselves in other people’s shoe,” he said.