Exterior of the Consumer Financial Protection Bureau in Washington, one of the targets of financial reform legislation that Republican backers say will reverse abusive bureaucratic intrusion into the marketplace. (Photo by Ted Eytan/Creative Commons) 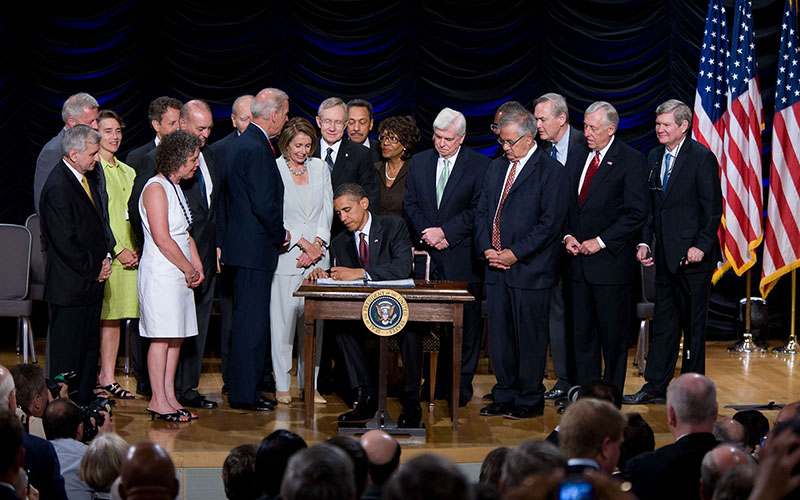 Lawmakers gather around President Barack Obama as he signs the Dodd-Frank Wall Street Reform and Consumer Protection Act into law in 2010 – when Democrats controlled Congress and the White House. (Photo by Lawrence Jackson/White House)

WASHINGTON – When Vietnam veteran Randall Stankewicz was getting the runaround from his mortgage lender, the Phoenix resident took his complaint the Servicemember Affairs Office in the federal Consumer Financial Protection Bureau – which settled the issue in 10 days.

But that office, which has handled more than 1,200 complaints from Arizona vets alone, would be eliminated under a sweeping bill approved Thursday by the House that would undo many of the financial reforms approved in 2010 as part of the Dodd-Frank Act.

In an editorial for The Hill newspaper, Rep. Andy Biggs, R-Gilbert, referred to the CFPB as “one of the most powerful and least accountable agencies in our nation’s history.”

The CFPB has long been a target of Republican lawmakers, and it showed in Thursday’s vote on the Financial Choice Act, with 185 Democrats and one Republican voting against it and 233 Republicans voting for it.

Biggs did not respond to requests for comment, but said in his editorial that the new act will reverse the unnecessary government intrusion on financial services that was put in place by the Dodd-Frank legislation, an act passed during the depths of the recession that began in 2008.

“The Dodd-Frank Act was an overreaction to historic crisis within our financial industry that never actually addressed the problem,” he said. “Instead, it overcorrected and relied too heavily on government to solve what only the free market can.”

The Financial Choice Act would eliminate federal funding to the CFPB, resulting in the removal of the servicemembers’ office.

That office has handled more than 44,000 complaints from veterans nationwide – including the 1,200 in Arizona – and provided some form of financial relief to almost 8,000 of them across the country, according to a report by the Arizona Public Interest Research Group Education Fund and the Frontier Group.

Arizona had the 11th-highest number of service member complaints per capita, said Diane Brown, the executive director of ArizonaPIRG.

Brown said that in addition to cutting funding, the Financial Choice Act will weaken the CFPB by stripping its status as an independent agency status, cutting education services and hiding consumer complaint data.

“Over 1,200 military complaints in Arizona is significant, particularly when considering that many of the complaints had to do with harassing debt collections, practices or inaccurate information,” Brown said. “Service members who are working hard to protect our country should be able to focus on their job and not have to worry about cleaning up a financial mess that wasn’t theirs in the first place.”

Nationwide, the most frequently cited complaints were for harassment by debt collection agencies, mortgage concerns and credit reports.

Many service members reported debt collectors threatening to “report the unpaid debt to their commanding officer, have the servicemember busted in rank or even have their security clearance revoked if they don’t pay up,” according to the ArizonaPIRG and Frontier Group report.

It said that service members “often face danger, stress and frequent relocation, among other challenges, they should not have to face unfair treatment from financial companies either during their time in service, or as veterans.”

Veterans like Stankewicz. He turned to the Office of Servicemember Affairs after being overcharged $500 and ignored by his mortgage company for five months.

“The CFPB called me and got all of the information, contacted my mortgage company and they had it taken care of within 10 days,” said the 101st Airborne veteran.

“The CFPB is protecting the consumer, it’s someone we can go to and trust when we are being messed with or being bullied illegally. It’s somewhere we can go to get things done,” he said.