Danny Seiden, Gov. Doug Ducey’s deputy chief of staff, at an American Enterprise Institute panel in Washington on the opioid crisis, where he talked about Arizona’s declaration of a health emergency to deal with the epidemic, which killed 790 Arizonans through overdoses last year. (Photo by Brianna Stearns/Cronkite News) 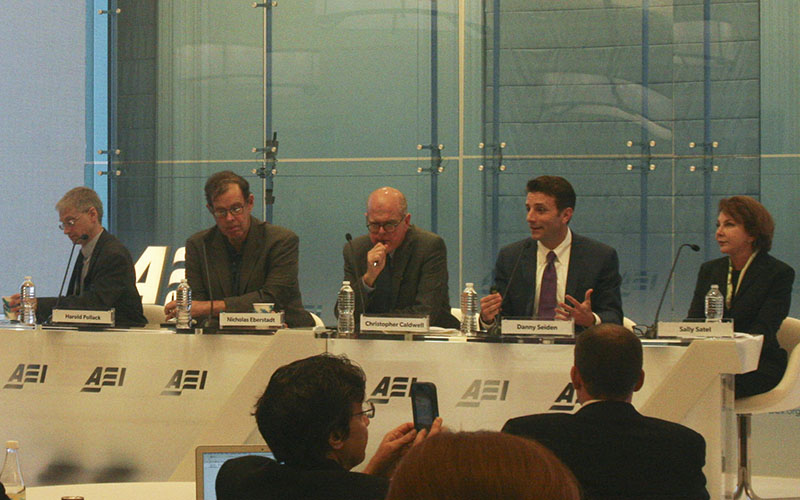 Arizona Deputy Chief of Staff Danny Seiden, second from right, said that besides more treatment options, Arizona is fighting its opioid epidemic through greater prevention and education, as well as stricter control on prescribed drugs, which made up half of opioid overdose deaths last year. (Photo by Brianna Stearns/Cronkite News)

WASHINGTON – Just days after Gov. Doug Ducey declared a health emergency in response to the state’s opioid crisis, a top aide was in Washington to press the need to tighten regulation of opioid prescriptions.

Danny Seiden, the governor’s deputy chief of staff for external affairs and policy development, backed up his call for change by citing alarming statistics about the epidemic during a panel Wednesday at the American Enterprise Institute.

“The one I think is the most upsetting is more than two Arizonans die each day from opioid overdose, and that number continues to go up,” Seiden told a packed room at the panel discussion.

Ducey’s declaration, issued Monday, was in response to 790 overdose deaths last year. That represented a 74 percent increase from five years earlier, the governor said, a rate that demanded a need for change in hospital regulations, greater access to rehabilitation drugs, and increased prevention programs.

“As the number of opioid overdoses and deaths increase at an alarming rate, we must take action. It’s time to call this what it is – an emergency,” Ducey said in a statement Monday.

Access to overdose reversal drugs, such as Naloxone, without a prescription was one of the first actions taken by the administration.

“Because of the amazing ability of this drug to revive or to breakthrough an overdose victim, we’ve tried to make it as readily available as possible,” Seiden said.

“From January to April, we began a program to distribute it to as many at-risk communities as possible, and so far it’s resulted in 492 documented reversals. And that’s just this year,” he said during the panel session.

With more than half of the opioid deaths in Arizona prescription opioids, according to the Arizona Department of Health Services, the “enhanced surveillance” provided by the emergency declaration also holds hospitals and doctors accountable for their role in the opioid epidemic.

Mandated checks of the controlled substance prescription monitoring program will now be required, in an effort to deter patients from abusing the pharmaceutical system. Along with limiting first prescription to no more than seven days worth of drugs, to reduce the number of pills on the streets.

“In 2016, doctors in Arizona prescribed 431 million pills, and that’s enough for every man, woman, and child to have about 62 pills,” Seiden said.

Another facet of the state’s action plan calls for implementation of strict discharge policies that require hospitals provide overdose patients with a referral to an addiction treatment program to prevent relapsed patients.

Seiden said it’s all part of an effort that is “dedicating more and more time and policy research towards prevention, not just treatment, because we have to fight this on all fronts.”

“A lot of our ideas have been around treatment, which we aren’t going to give up on,” Seiden said, “we have to get to prevention as well.”

He pointed to several pilot programs that have provided assistance through prevention, interception, and education.

The Angel Initiative lets individuals surrender drugs and get treatment in exchange, rather than facing prosecution. The Vivitrol program provides opioid blocker treatment on release for prison inmates with a history of opioid abuse.

“I think what we need is education. They key to prevention is education,” Seiden said after Wednesday’s program. “We are trying to get more resources and more flexibility on how we can use some dollars to address this problem in a way that benefits Arizonans.”