Then-director of the FBI James Comey testifying last summer on the agency’s investigation of Hillary Clinton. Comey, since fired by President Donald Trump, is expected to tell a Senate committee Thursday of repeated attempts by Trump to influence the FBI’s probe of Russian ties to the Trump White House. (Photo by Emily Zentner/Cronkite News) 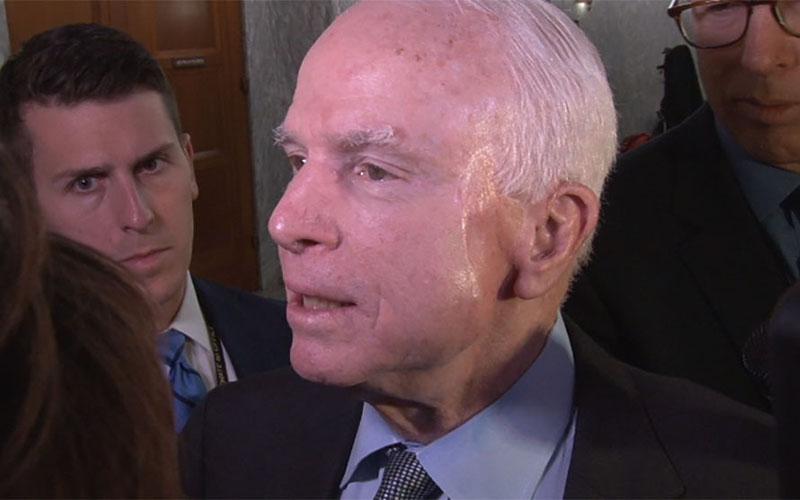 Comey, according to copies of the opening statement he is scheduled to give Thursday to the Senate Select Committee on Intelligence, will detail numerous meetings and phone calls with Trump where they discussed the FBI’s probes of ties between Russian officials and the administration.

Those discussions included Trump urging Comey, implicitly and explicitly, to “let this go,” referring to an investigation of conversations between a Russian ambassador and former National Security Advisor Michael Flynn. Comey’s statement says Trump repeatedly complained that the investigation was “a cloud” hindering his administration.

Trump fired Comey on May 9.

Rep. Raul Grijalva, D-Tucson, said Wednesday that Trump was putting Comey “into a position to try protect either Flynn or to minimize the investigation that was going on.” He said he thought Comey was put into a tough spot by the president.

Sen. John McCain, R-Arizona, called Comey’s statement “disturbing.” But McCain, who sits on the Intelligence Committee and will be part of Thursday’s hearing, told CNN that he plans to “wait and see” what Comey says.

Other members of Arizona’s congressional delegation did not immediately return calls seeking comment on the statement Wednesday.

Deputy White House Press Secretary Sarah Sanders said in a press briefing Wednesday that she was “not aware” if Trump had read the statement, and declined comment on its contents. But she called the committee’s timing of the statement’s release “a little bit interesting.”

Comey’s prepared statement is separated into five sections, each detailing a different encounter with Trump from Jan. 6, before Trump was inaugurated, through April 11, the last discussion he said he with the president before he learned of his firing through a Trump aide. The two have not spoken since.

In the statement, Comey said he “felt compelled … to ensure accuracy” by detailing every encounter he had with Trump in official memos – something he did not do prior – after their Jan. 6 meeting at Trump Tower. The memos were written immediately after he left each meeting so the details would be fresh, he said.

The statement lays out a dinner meeting of just the two men shortly after Trump’s inauguration, in which the president reportedly said he expected loyalty from the FBI director. Comey didn’t respond but sat with Trump as they “simply looked at each other in silence,” in what the statement calls an awkward few moments.

When Trump revisited his expectation of loyalty later in the same dinner, Comey responded, “You will always get honesty from me.”

Comey’s statement says he told Trump that the FBI did “not have an open counter-intelligence cases on him” – a point that Trump noted in the letter in which he fired Comey.

Trump often described the Russia investigation as a “cloud that was impairing his ability to act on behalf of the country” and he urged Comey to “get out” that Trump wasn’t being investigated, according to Comey’s version of events. But Comey’s statement said the FBI and the Justice Department are reluctant to make such announcements “for a number of reasons, most importantly because it would create a duty to correct, should that change” and the president did end up being investigated.

Comey does not include every detail of his interactions with Trump since January, but included encounters “relevant to the committee.”

The White House on Wednesday announced the nomination of former Assistant Attorney General Christopher Wray to fill the FBI directorship that had been held by Comey.