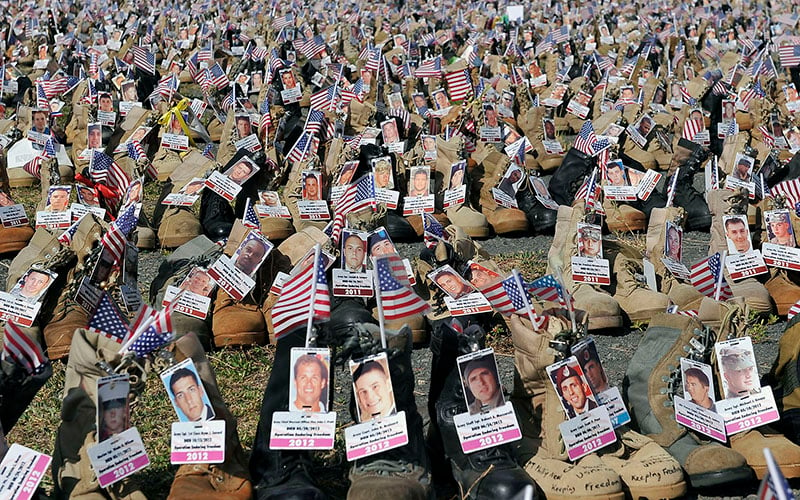 More than 6,000 combat boots with the names and pictures of U.S. servicemen and woman lost in Operations Iraqi and Enduring Freedom on display at Pearl Harbor on Sept. 11, 2013. (Photo by Petty Officer 1st Class Cynthia Clark/Department of Defense)

Khizr Khan, a Pakistani immigrant who spoke out at the Democratic National Convention against GOP presidential nominee Donald Trump, said he did so to honor the memory of his son, Army Capt. Humayun Khan, killed in Iraq. (Photo by Wafa Shahid/Cronkite News) 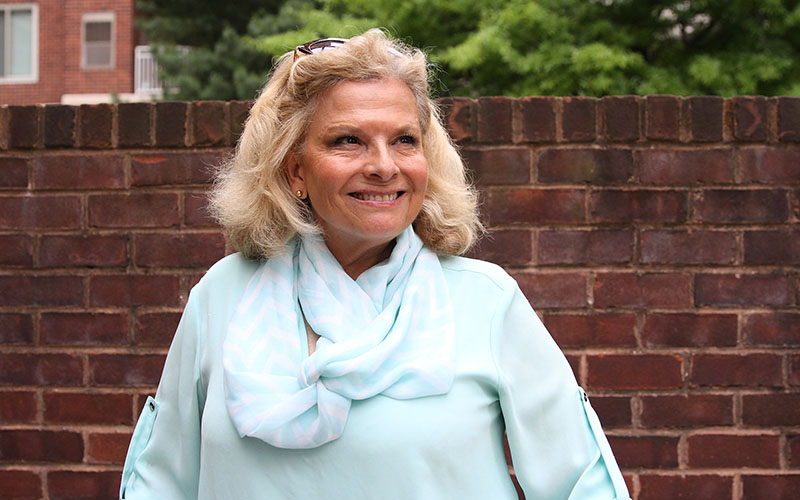 Vivianne Wersel, a Gold Star wife from Virginia, said that “regardless of what went on in the campaign,” President Donald Trump should be commended for outreach to Gold Star families at events like Monday’s reception. (Photo by Megan Janetsky/Cronkite News)

WASHINGTON – Glendale resident Kathy Upchurch was trying to see the positive in President Donald Trump’s planned reception for Gold Star families Monday, but she was having a hard time getting past his run-ins last year with a Muslim Gold Star family.

“The comment he made was really uncalled for with a Gold Star family,” said Upchurch, a Gold Star wife herself, referring to then-candidate Trump’s feud with Khizr and Ghazala Khan, whose son, Army Capt. Humayun Khan, was killed while serving in Iraq.

But Vivianne Wersel, the founder of the Arlington, Virginia, chapter of the Gold Star Wives of America, welcomed the scheduled White House reception, calling it another indicator that Trump is “opening up the doors to listen.”

“For many widows, this is a big thing,” she said. “It’s the president, regardless of what went on in the campaign. He’s the president of the United States. I honor and respect his role and I think he’s done well.”

Receiving Gold Star families – those who have lost a loved one to military service – could be seen as a shift for Trump, who made headlines in July by attacking the Khans in a stream of tweets after they spoke out against him at the Democratic National Convention.

Upchurch, whose husband, Marine Lt. James Glenn Upchurch, was killed in Vietnam in 1969, said Trump’s comments about the Khans indicated that he needed to be educated about the cost of war. Trump still “has a lot to learn, he’s not a politician,” she said.

“I think he’s learning, if he’s holding a reception – a Gold Star family reception – there’s a possibility people have started trying to educate him more of the role of the president,” Upchurch said.

But for some like Maria Martin, a Tucson resident whose son, Sgt. Martin Lugo, died in Afghanistan in 2010, receptions are not enough.

“When my son was out of touch in training or when he was deployed, it almost felt like being under water,” she said. “The second I heard his voice again or got a letter, it felt like coming up for air gasping…. When our soldiers serve, the family serves as well.”

Martin said that Trump should have refrained from commenting and that, both during the campaign and in a general capacity, there should have been “100 percent support of our Gold Star families without judgment.”

Upchurch and Martin are among the 2,675 Arizona families who have lost a relative or loved one in battle, according to the National Gold Star Family Registry, a database that recognizes more than 472,000 U.S. soldiers killed on the battlefield.

Little information was available on Monday’s scheduled reception for Gold Star families, which was listed on the calendars of the president, vice president and first lady as a closed evening event at the White House. Calls and emails to the White House seeking comment were not returned Monday.

But Wersel noted that Monday’s event would not have been the first time Trump has met with families who lost a loved one in military service. On April 5 – Gold Star Wives Day – Trump, Vice President Mike Pence and Cabinet members met with the Arlington chapter of Gold Star Wives, she said.

Wersel, whose husband Marine Corps Lt. Col. Richard Wersel died of a heart attack a week after returning from Iraq, has worked in D.C. to campaign for recognition of Gold Star families. But she said having the ear of the administration is critical.

“We go to Congress with our issues, but it stays at that level,” she said. “Sometimes the message doesn’t get up the ladder to higher officials.

“They sometimes need to see us and hear us, the best way to do that is have these receptions and have these meetings,” Wersel said. “It makes it real.”

The Khans could not be reached for comment Monday. But Martin said that, for her, the important thing going forward is not just that the president supports the families, but that he makes sound decisions for the welfare of current soldiers.

“I think the biggest thing he can do is be prudent in his decisions, make wise decisions, listen to other people who have more experience than he does so we don’t create more Gold Star families,” she said.