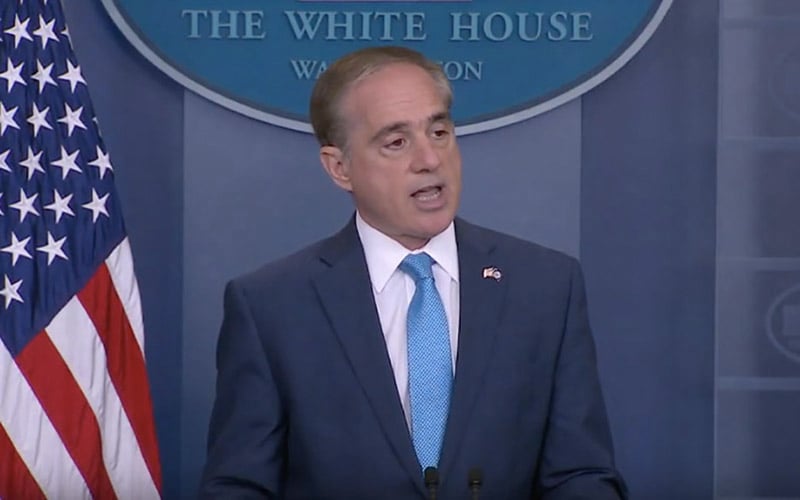 Veterans Affairs Secretary David Shulkin said reducing the number of veteran suicides is a top priority, and that one way to do that is to extend mental health care to vets who may not have been able to get it before. (Photo courtesy the White House)

The VA says 20 veterans commit suicide every day in the U.S., a much higher rate than the rest of the country. But it also said that only about six of those vets had received VA health services. (Photo by Chad Garland/Cronkite News)

WASHINGTON – A program that lets veterans with other-than-honorable discharges get emergency mental health care is just one of the steps the Department of Veterans Affairs is taking to address increasing suicides by vets, the secretary said Wednesday.

Secretary David Shulkin said during what he called a “State of the VA” address at the White House that reducing veteran suicides is his top priority.

“That is a population of veterans that is at a very high risk for suicide,” Shulkin said of those who received an other-than-honorable discharge from their military service.

The VA said that there are currently 505,000 former service members who received such discharges.

It was unclear Wednesday how many of those veterans live in Arizona, which has a total veteran population between 528,000 and 535,000, according to various VA reports of the last year. About 40 percent of them are enrolled in the VA Healthcare System.

Under the program touted by Shulkin, which began in March, any veteran who feels that he or she needs help can enter an emergency room or walk-in mental health clinic and get up to 100 days of care, regardless of their discharge.

While the veteran is receiving care, the VA tries to establish his or her type of discharge and determines the possibility of upgrading that discharge to “veteran” status, which would allow for care beyond the 100 days.

“As a veteran who fought in Iraq, I know how critical it is to support efforts to de-stigmatize and reduce barriers to mental health care for those who served in uniform,” Rep. Ruben Gallego, D-Phoenix, wrote in an email Wednesday.

Other members of the delegation and veterans organizations around the state did not immediately respond to requests for comment on the program Wednesday.

The VA says 20 veterans in the U.S. take their own lives per day. Of those, only six used VA health care services. After adjusting for differences in age and gender, risk for suicide was 21 percent higher among veterans when compared with civilian adults, according to the department.

It said that suicide rates are highest among Iraq and Afghanistan veterans aged 18 to 29 years. In general, veterans aged 18 to 39 are among the most likely to commit suicide, according to the VA. There are about 70,000 veterans in that age bracket living in Arizona.

Overall, the agency said, veterans who do not use VA health care systems had a greater increase in rates of suicide than those who use VA-provided health care.

Gallego said he was encouraged that the secretary is looking at innovative ways to address veterans’ needs and that “it’s important we don’t deny care to these brave men and women at times when they need it most.”