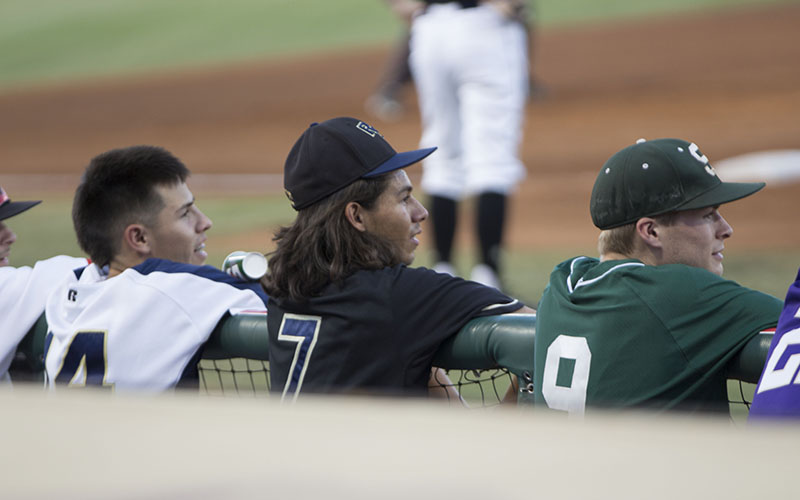 Adrian Salazar (middle) watches from the dugout at Goodyear Ballpark during the AZ Baseball Coaches Association 5A All Star Game. Salazar was the only pitcher to throw over 100 pitches in one game for Raymond S. Kellis this year. Greg Macafee/Cronkite News

PHOENIX – Phoenix Christian pitcher Steven Cochran powered his Cougars to a Class 2A state championship on May 13 with a complete game performance, allowing six hits in a 9-2 win over Wilcox High School.

But Cochran came close to not being allowed to throw a single pitch on the biggest stage.

The night before, the junior closed out his team’s 4-1 victory over Scottsdale Christian Academy, striking out two of the seven batters he faced in the game’s final two innings. With a pitch count of 25, Cochran was just six pitches away from being ineligible to pitch in the championship game.

But on his 26th pitch, Cochran induced a game-ending double play that sent the Cougars into the championship.

“I could tell that I was going to be needed for the next game because we had lost our other pitcher so I knew that I wasn’t going to be able to go over 30,” Cochran said.

The “30” that Cochran referenced is the highest amount of pitches a sophomore, junior or senior can throw before needing at least one day’s rest under the new “Pitch Smart” rule implemented by the Arizona Interscholastic Association last summer. For freshmen, the number is even lower. They have a limit of 20 pitches before they are required to rest for one day.

“I was going to go get him at 30,” Phoenix Christian coach Mark Band said of the limit that, if exceeded, would have forced Cochran to rest for at least one day before being able to pitch again. “We were going to roll the dice and it really worked out. You gotta be good and sometimes you gotta have the ball bounce your way.”

Varying versions of the “Pitch Smart” rule were installed across the country after the National Federation of State High School Associations required every one of its state organizations to develop a pitching restriction policy based on the amount of pitches thrown during a game.

In the official news release, Elliot Hopkins, NFHS director of sports and student services and staff liaison for baseball, said the association was pleased to find a reasonable modification to the previous rule in order to emphasize the risk that occurs when pitchers overuse their throwing arms.

Incoming Arizona Interscholastic Association Executive Director David Hines, who will officially take over in July, said a committee consisting of baseball coaches and athletic directors, along with a sports medicine advisory committee made up of doctors and trainers, teamed up to set the standards for the “Pitch Smart” rule in Arizona.

Initially, the proposed limits were based on a player’s age, pitch count, and how many days of rest a pitcher must have, dependent upon the amount of pitches he threw in one game. But Hines said before that was even implemented, a change was made.

Instead of limiting pitchers by age, the committee decided to separate pitchers by year in school.

“It was really tough for a coach to go, ‘So you’re a junior but how old are you?’ You may have a young kid, you may have an older kid, so we just started looking at the group,” Hines said.

Yet some opposition to the rule still existed.

The incoming AIA director said that some smaller schools fought the restrictions, arguing that their smaller rosters would not have the necessary amount of pitching to work through their schedules within these limits.

Arizona high school baseball coaches have had to reinvent how they manage their pitching staffs during the season along with how they develop their staff for the future.

In the weeks leading up to the season, Band said he gave players a look on the mound that he wouldn’t have in past years, just to be more proactive toward developing a large enough staff for the future.

Phoenix Christian had 18 players on its roster this past season. Band used 10 of them on the mound. He experimented with different players in the offseason and adapted to the rule because he knows it is meant to keep kids healthy.

“I think that it’s a good rule because you have so many coaches that will just keep running out their No. 1 guy if he says he’s feeling all right,” Band said. “I think it’s made a lot of coaches have to manage a little better because they can’t just keep sending the same guy out there.”

Michael Deardoff, the coach of Class 5A state champion Raymond S. Kellis High School in Glendale, has always prided himself in knowing the limits of his pitchers and respecting their arms, including Adrian Salazar.

During Kellis’ run to the state title, Salazar, a senior, threw in five of the team’s six games and threw at least 100 pitches in four of those. But the workload wasn’t anything new for Salazar as he said his arm has always been ready to go.

“Since I was around 9 or 10 years old, I’ve pitched for club ball and my arm never got sore,” Salazar said. “I’ve never had a problem with dead arm and it’s never really taken long for my arm to recover.”

At Phoenix Christian, Band only had one pitcher throw more than 100 pitches all season. Only two of the school’s pitchers threw more than 50 innings in 2017. Band allowed just three of his pitchers to throw complete games. One of those came from Cochran with a state championship on the line.

The coach of 14 years said he developed a pitching strategy before each game, so that if they played multiple games in a week, he knew when to pull out a pitcher like Cochran. While some teams like Phoenix Christian planned ahead for weeks like this, other teams tried to avoid playing for more than two games in one week.

“Before the season even started I was trying to schedule a couple games and teams wouldn’t play us because it was their third game of the week,” Band said.

Some teams succeeded by closely monitoring pitches and going into each game with a specific strategy. But schools like Kellis took a different approach or didn’t change their approach at all.

Deardoff used a total of 10 pitchers in 2017. Like Phoenix Christian, Kellis only had two pitchers throw more than 50 innings but it rarely implemented a pitching strategy unless it had a busy week on the diamond.

“It only really affected us when we had pretty long weeks with a lot of games,” Deardoff said. “I can only think of a couple times where I took a kid out because I knew I needed to bring him back later in the week.”

One of those times came in the Class 5A play-in game when Kellis took on Deer Valley to get into the state championship tournament. Deardoff took Salazar out of the game after his 58th pitch, requiring him to rest for at least two days before being eligible to pitch again – just in time for his team’s first-round matchup against Verrado High School.

Unfortunately, the challenges of protecting the arms of pitchers don’t just occur during the high school season. Many take to the road in the summer, playing on travel teams where this is no pitch count rule. This is where Hines believes the most trouble comes.

“The biggest challenge is not during the high school season, but it’s the other time where someone may or may not be following the pitch count,” Hines said. “If the kids don’t have down time or time to rest then they are never getting enough time to repair or recover from a season.”

At Phoenix Christian, Band organizes a team that plays at least 30 games during the summer. The team will also play a few games in the Dominican Republic. The summer team allows Band to give opportunities to younger players who may not get a lot of innings during the regular season. While not required, he plans to follow the rules set forth by the AIA.

“We’re gonna manage the pitch count in the summer just like we do in the spring,” Band said. “Just so we’re on that page.”