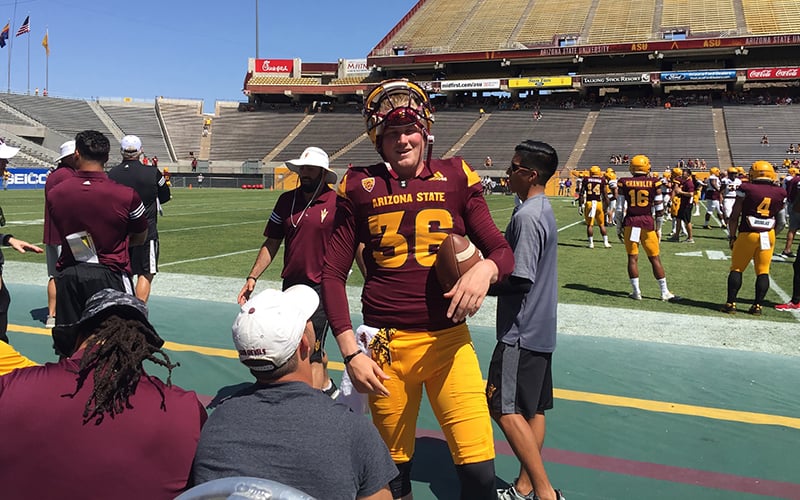 Arizona State punter Michael Sleep-Dalton, one of a growing number of Australians kicking for U.S. college teams, stands on the sideline at the Sun Devils’ spring game on April 15 at Sun Devil Stadium in Tempe. (Photo by Ryan Clarke/Cronkite News)

The ball is snapped and Sleep-Dalton senses trouble as it slips off Fraboni’s fingers and skips before landing at the punter’s feet. Thinking quickly with defenders closing in, the right-footed Australian moves the ball to his left foot and boots it to the other end of the field.

This fictional scenario could become real for the Sun Devils when the season starts. Australians’ unique punting style is a game-saving weapon for college football special teams units, and they are revolutionizing the position.

“If I get a bad snap, I don’t have to reassess myself. I can just go straight on with my left foot,” Sleep-Dalton said. “It’s good to be confident, to kick it on my other foot and be able to place it.”

Sleep-Dalton is the latest Australian-born punter to play college football in the United States, verbally committing to ASU in November 2015 after playing at City College of San Francisco. He is taking a path similar to ones forged by Tom Hackett at Utah and Sleep-Dalton’s cousin Cam Johnston at Ohio State.

Australia has become a training ground for punters looking to make the jump to American football. At the helm of that training ground is former punter Nathan Chapman, who founded the academy Prokick Australia with the hope of helping former Aussie rules football players transition into the American game.

Chapman and his academy are responsible for dozens of punters entering the college football ranks. The last four Ray Guy Awards, given to the nation’s top punter, have gone to Australians, including Tom Hornsey at Memphis, Hackett — twice — and Mitch Wishnowsky at Utah.

“As we put more over there and put guys through the system, it’s a lot easier for newcomers to transition because you’ve got a lot more of a knowledge base,” Chapman said. “Those guys can give them insight into what they’re up for so they can train back here (in Australia).”

Switching from Australian rules to American football isn’t easy. Aussie rules football is rugby’s more technical counterpart, and it requires players to kick and “hand pass” the ball around the field and through goal posts. Experience kicking a similarly shaped ball makes the transition to the American game easier.

But Aussie rules is far more physical than American football, at least for punters. Players spend their whole lives walloping each other, so punting provides a totally different learning curve.

“I love the game now,” Sleep-Dalton said, smirking. “It’s very different from Aussie football. I have to do a lot less, which is fun.”

Chapman will be the first to say the transition requires more effort. He joked that Sleep-Dalton, who was a redshirt last year, should “get in the f—ing gym” and holds his students to an extremely high standard. He took a break from a phone interview to scream through the Australian wind at one of his students for horsing around.

Chapman is serious about helping them find their opportunity in the United States. After eight years in the Australian Football League, he trained for three years before trying out for the Green Bay Packers in 2004. After not making the final roster, he returned home to Melbourne and founded Prokick Australia to pass on his knowledge to the next generation.

“Mine was quite a long hard slog and a long journey,” Chapman said. “I was fortunate enough to get on with Green Bay, but after I didn’t make the final roster I just knew I had to stick around the sport.

“It became about how I can get more blokes the opportunity to get across and play.”

The allure of the Aussie punter lies in their versatility. Given their backgrounds in Aussie rules football, the Australian punters have the ability to kick with either foot and roll out to either side. They’re also good with their hands in case of emergency.

All the Aussies have a dominant foot — Sleep-Dalton said he is far more comfortable with his right — but having a punter who can find his way of a jam quickly is useful for college special team units. Although Australians might not have the same type of power as American pro-style punters, they have become legitimate weapons that intrigue coaches.

“We’ve got to get him kicking it good with one foot first,” Graham joked. “I like the fact that he can roll punt and do all the things that he does, but he’s just got to get consistent.”

That’s the great challenge for Australians once they make it to college: remaining consistent and fitting the mold that American coaches have in place. Versatility is one thing, but the game more often calls for pro-style punting due to the increased distance and accuracy of those punts.

Chapman believes that the influx of Australians has motivated American punters to improve their games, while simultaneously motivating Australians to achieve level footing with the Americans.

He said the healthy competition has created a newfound appreciation for punters.

“Punting has been the last position chosen and no one really cares unless you have a bad kick. Then they boo and carry on,” Chapman said. “But I think people have started to notice that having a really good punter helps your team.”

In order for Sleep-Dalton and other Aussies to truly help their teams, they need to perfect the pro-style punt while not losing sight of their versatile play style. Sleep-Dalton spent time training with Chapman to improve his pro-style punt and had an entire redshirt season to work on it, while also learning different strategies and techniques from Haack and ASU special teams coach Shawn Slocum.

“He’s one of the main reasons I came (to ASU),” Sleep-Dalton said of Slocum. “Having an ex-NFL coach is such (an) experience and it’s been great having him at practice.

“He teaches me things I don’t think about, and I can just teach myself.”

Australians have yet to solidify their place in the NFL. The rollout punt is prevalent in the Pac-12, but it’s almost non-existent at the professional level where field position is far more important than tricking the opposition. NFL coaches occasionally run fakes, but a great pro punter has a consistent, powerful boot every time.

Only a handful of Aussies have spent significant time in the NFL, including Mat McBriar, Sav Rocca and Brad Wing. They set the foundation for future Australians to find their place in professional football.

Even if they don’t have successful NFL careers, the impact of Aussies at the collegiate level is significant and growing. That has a lot to do with the brotherhood that has developed over the years as more and more graduates of the Prokick program find scholarships and recognition.

Chapman’s proudest moments are when players he has trained compete against each other. Last season’s matchup between Penn State and Ohio State pitted Cam Johnston against Daniel Pasquariello, and although Pasquariello didn’t play, Chapman was there to watch them kick the ball to each other at halftime.

With family and friends on the other side of the world, many of the Aussies spend their breaks with each other and strengthen a bond that goes beyond country of origin. It’s a fun-loving fraternity that represents the future of the college game.