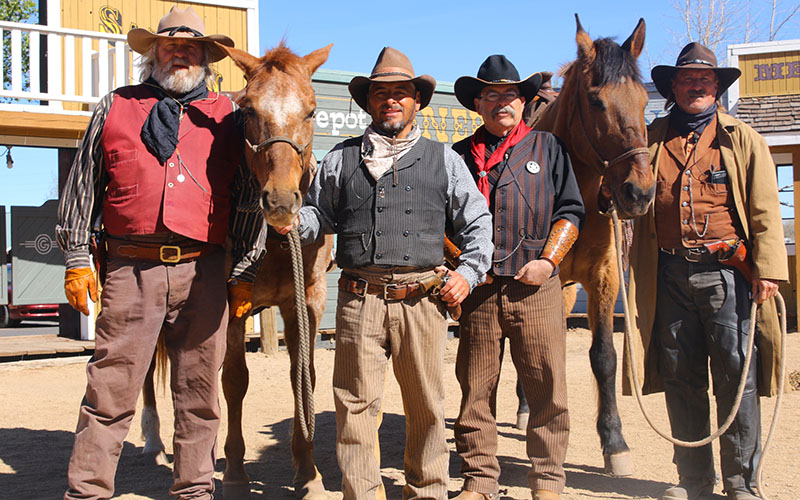 Members of the Cataract Creek Gang put on a gunfight every day in Williams. Members of the gang also stage a live train robbery on the Grand Canyon Railway. (Photo by Charlie Clark/Cronkite News) 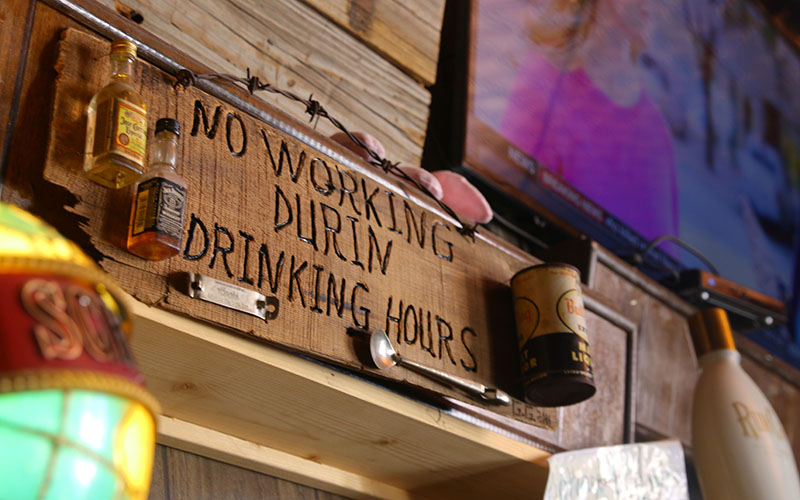 The Sultana Bar in Williams is more than 100 years old and possesses the second-oldest liquor license in the state. (Photo by Charlie Clark/Cronkite News) 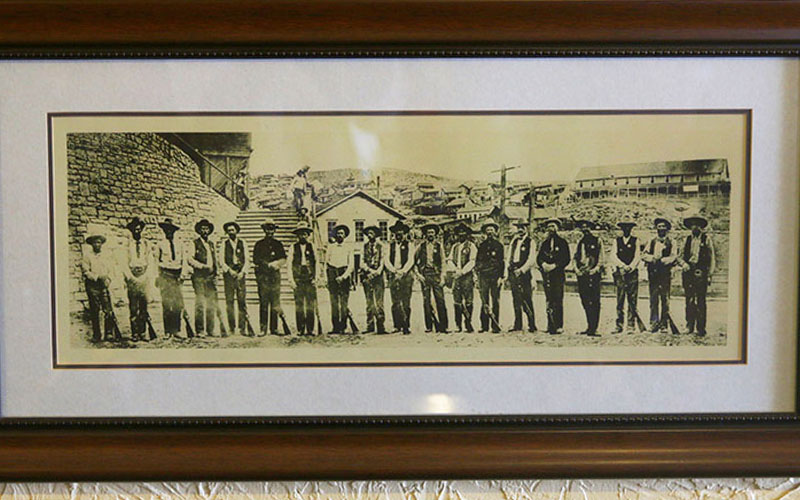 A photo of all the Arizona Rangers hangs in the Branding Iron Restaurant, part of Moore’s Wild West Junction. (By Charlie Clark/Cronkite News) 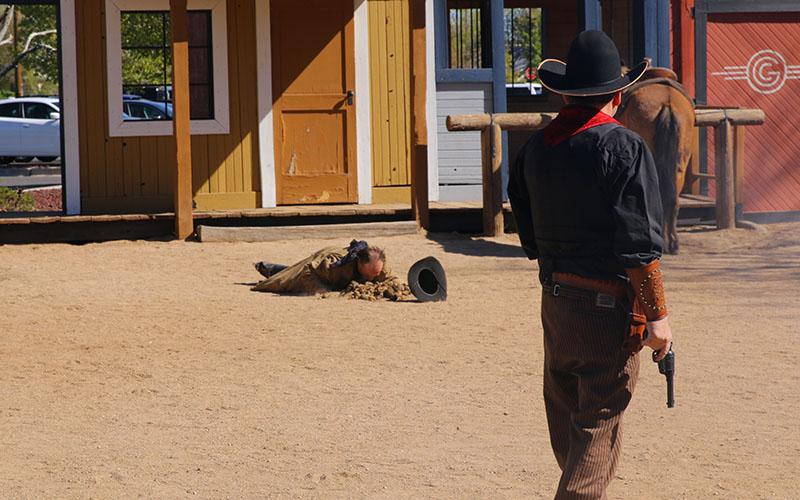 During the Wild West show in Williams, the town marshal was quick to draw on one of the Cataract Creek Gang boys. (Photo by Charlie Clark/Cronkite News) 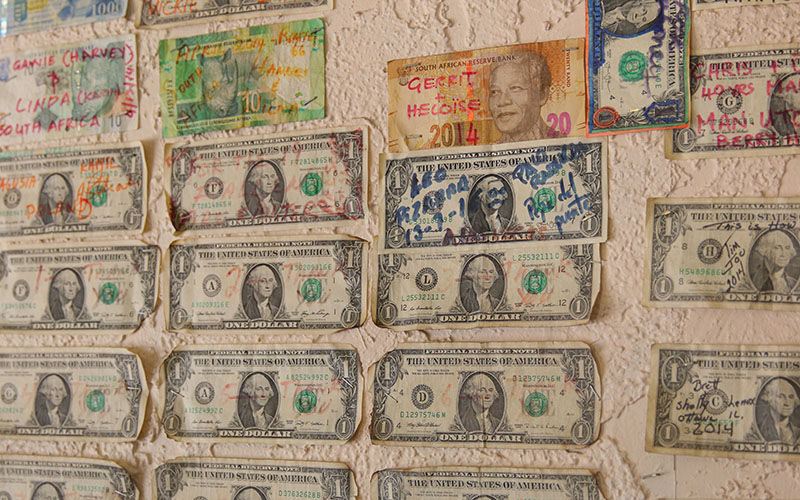 Dollar bills from across the globe line the walls of the Long Horn Saloon at Wild West Junction in Williams. It is a callback to miners who used to leave a dollar behind at restaurants and bars so they’d always have money for something to eat. (Photo by Charlie Clark/Cronkite News) 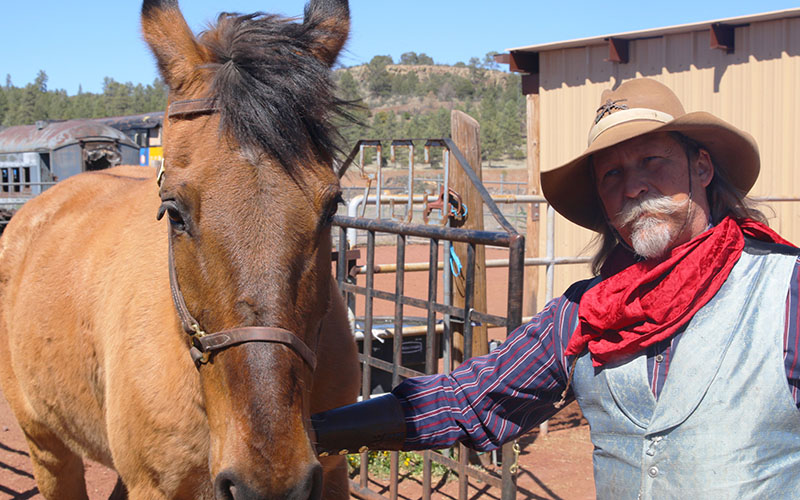 A member of the Cataract Creek Gang in Williams preps his horse prior to the show. (Photo by Charlie Clark/Cronkite News) 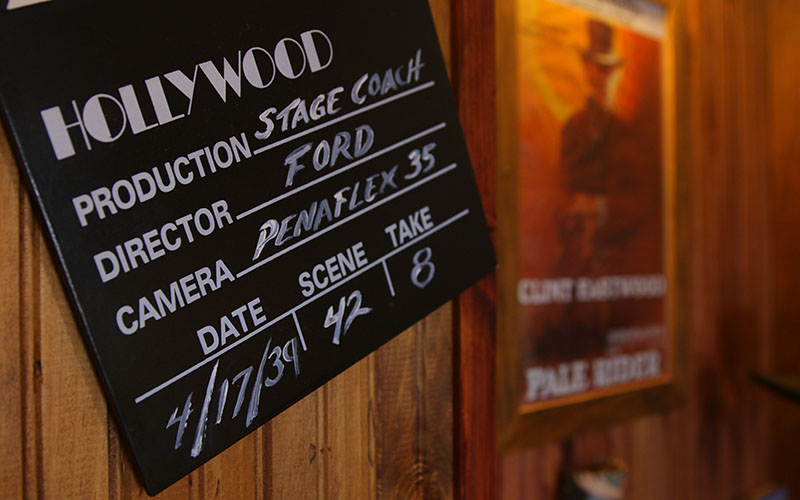 The Wild West Junction hotel in Williams has a variety of western-themed hotel rooms, including those that feature movies, China camps, gamblers and trappers. (Photo by Charlie Clark/Cronkite News) 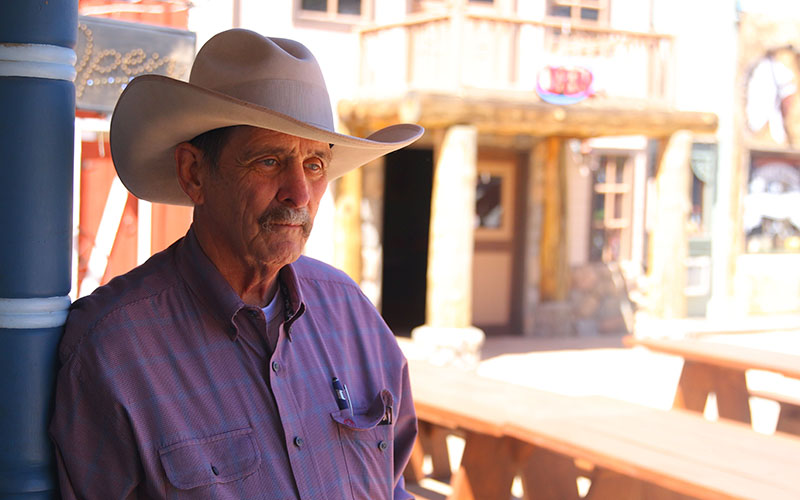 Mayor John Moore stands outside his restaurant in Williams’ historic district. The restaurant is part of a Wild West Junction, owned by Moore, a small complex with a restaurant, bar and western-themed hotel. (Photo by Charlie Clark/Cronkite News)

WILLIAMS – On a cold night in April just after 10 p.m., the bellow of a train echoes throughout the quiet town of Williams. Four hours later, another train passes.

But while the train may be the bane of light sleepers, it is also a reminder of the city’s railroad and cowboy past. A past that, as in many Arizona cities, continues to help the city thrive today.

The history of railroads, miners, outlaws and cowboys have made Arizona emblematic of the American West. The exploits of Wyatt Earp, gunfighters and lawmen continue to enthrall people far and wide. And the number of Hollywood films that take their cue from Arizona’s Old West history – “Stagecoach,” “Tombstone,” “Red River,” to name a few – are aplenty.

But throughout Arizona, the state’s Old West history is not just a romantic tale or some forgotten past. It’s a history that’s been preserved in a variety of ways, some more authentic than others, and a legacy that continues to help many cities and towns prosper.

Although officials can’t pinpoint exact figures to quantify the economic impact, those who participate in the culture say this iconic part of American history plays an important role in the state’s tourism industry.

Tombstone, a town drenched in the history of the West with Doc Holliday and the O.K. Corral, saw 108,537 visitors in 2016, according to the Tombstone Chamber of Commerce. Wickenburg, a city that has shifted its tourism economy more toward medical and recovery tourism, still sees 50,000 to 60,000 visitors for its annual heritage event, according to the Wickenburg Chamber of Commerce.

In Northern Arizona, about 2 million people visit Williams annually. Many pull over on their way to the Grand Canyon, but the city’s cowboy culture and Route 66 history have made it more than a pit stop.

“Old West culture is something that travelers to Arizona are mindful of,” said Scott Dunn, a spokesman for the Arizona Office of Tourism. “It is definitely something that sets Arizona apart from its competitors.”

But how that culture manifests and what it means to people varies.

“For some, it may mean a replica town with mock gunfights, others it may mean movies, and for other people, it might mean a historical place,” Dunn said. “The thing that is great about Arizona is it has the full spectrum of the Old West experiences.”

Williams has come to exemplify that full spectrum. It’s a place where the dichotomy of 1950s Route 66 flash with western entertainment is striking.

Named after mountain man Bill Williams, the town was founded in 1881 and expanded quickly with the arrival of the railroad in 1882. The railroad made Williams a shipping center for the ranch and lumber industries.

Although lacking the same level of outlaw presence of Tombstone, Williams still had its share of saloons, brothels, gambling houses and opium dens. The latter due in large part to the town’s deep railroad connections, Mayor John Moore said.

The completion of Route 66 through Williams made the town a hotspot for businesses along the highway. Its proximity to the Grand Canyon also made Williams a popular stop for tourists. 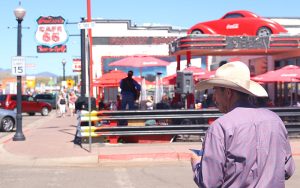 In Williams, cowboy hats and Route 66 make for an intersting marriage, but tourists love it. (Photo by Charlie Clark/Cronkite News)

But when workers built Interstate 40 and bypassed the city in 1984, it left the city in “dire straights,” said Moore, who has held the position for nearly 10 years and owns Wild West Junction, a hotel, bar and restaurant in town.

Moore – with his wide-brimmed cowboy hat, boots, frank personality and affinity for Nelson Mandela – is a man seemingly ripped from the pages of an Elmore Leonard novel.

He likened the impact of the Interstate 40 bypass to the barren small town in the film “Cars,” which he said was partially inspired by Williams.

Moore said Williams was still the “Gateway to the Grand Canyon,” but many businesses were forced to shut down and prospective businesses disappeared entirely.

But the town persisted and eventually the businesses began to return. Moore credited the community’s perseverance in part to the modern cowboys.

“At the time, what helped hold the community together was the ranchers and loggers and those kind of people,” Moore said.

Moore said they all continued to rally together for support and eventually Williams’ tourism economy regained its strength.

Now aside from dealing with a water shortage and other typical small-town problems, Williams is doing well, Moore said.

The town of just over 3,000 residents sees about 2 million visitors annually, and the Route 66 and cowboy culture businesses are quite popular.

Tourists mingle with both working and ‘artificial’ cowboys 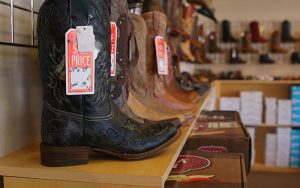 Boots are a popular item in Williams, and Western Outfitters and DeBerge Saddlery is ready to cater to the working cowboy. (Photo by Charlie Clark/Cronkite News)

Walk down a street in Williams’ historic downtown, and you are guaranteed to spot some sign of cowboy culture. In fact, it is unlikely that you’d go an hour without spotting someone sporting a cowboy hat. And that someone may very well be flanked by tourists wanting a photo.

“This is my business card,” Moore joked pointing to his hat.

The downtown strip has several buildings built in the late 1800s. Bars, restaurants, and a few hotels – almost all of which have a cowboy or Route 66 bend – line the street.

Visitors also will find plenty of Old West attractions, from a daily Wild West Show to an armed train robbery.

Just outside of town, there’s the Historic Hat Ranch, a place Franklin Roosevelt visited during his 1932 campaign and a favorite retreat for foreign visitors.

Moore believes that at least half of the economy is derived from cowboy culture, and the tourists love it.

“This is what they expect to see,” said Buck Williams, owner of Buck’s Place, a gun store. Williams is a former actor in the Wild West Show.

“Go to France, everybody knows you’re going to see the Eiffel Tower. Go to England, you get to see the old castles, you think of knights in shining armor,” Williams said. “Go to the western United States, and you think of the Old West. … It’s what a lot of folks expect.”

Williams said the Wild West Show has fanclubs in Germany and England, and there’s a girl from China, who after visiting, decided to write a book about Williams’ cowboys. 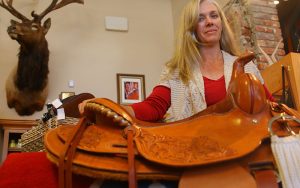 But Williams’s cowboy culture isn’t just for show, that’s why so many of the stores cater to the real working cowboy with leathersmiths, gunsmiths and the like.

“You don’t have to be a cowboy at heart to appreciate it,” Schramm said. “It fits the working cowboy, then crosses over.”

Ultimately, there doesn’t seem to be much of a conflict between the real and artificial cowboy either.

“Actors want to save the culture of the cowboys, and the cowboys are living it,” Moore said.

Arizona’s Old West history is not only a draw in rural communities, but also in the state’s largest metropolitan area.

Since opening just over two years ago, the Western Spirit: Scottsdale’s Museum of the West has aimed to bring “the Old West, to the new west,” said Mike Fox, the museum’s director.

The museum focuses on presenting the Western art and culture of 19 western states and parts of Canada. The exhibits, which rotate, are on loan from collectors.

The museum was a project 30 years in the making and a passion of Scottsdale Mayor Herb Drinkwater. The city tried three times to make the museum a reality. The city council finally approved it with a unanimous vote in 2013. 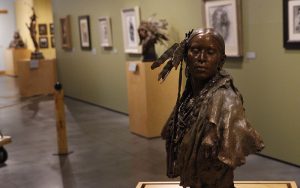 Western Spirit: Scottsdale’s Museum of the West focuses on western art and culture of 19 western states and parts of Canada. (Photo by Charlie Clark/Cronkite News)

The city built the building, and a nonprofit organization took over responsibility for the interior.

“We always thought a museum like this would be important not only to local residents for them to make a greater connection to the region (in which) they reside, but also for the tourists,” Fox said.

The museum sees about 100,00 visitors annually, and it has found success both with locals and foreigners.

“So many Europeans and Asians have such an affinity for the American West, and they do so because of the American film,” Fox said. “So in our business, it is really important for us to make foreigners feel welcomed and that they are gaining knowledge in this region.”

Fox said the museum isn’t just about celebrating and sharing the story of the West, but also about ensuring that visitors are gaining an accurate account of the West.

“We’ll always be true about that storytelling,” Fox said. “When we know something may be a myth, we present it as that, verses this is truism.” 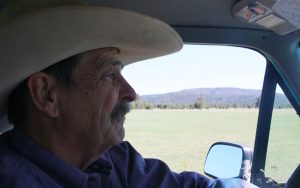 As John Moore drove his old pickup truck down the bumpy road of the Historic Hat Ranch, he reflected on what the area was like 100 years ago.

The ranch, just outside Williams, has been around since before the 1920s and stretches 2,800 acres.

Surrounded by Kaibab National Forest, Moore hopes to help keep the ranch a true sanctuary, a place where one can go and really feel what it was like to live in the days of the cowboys who originally settled in the area.

The sound of the highway is nonexistent, and although there are certain concessions, lights powered by solar rather than kerosene for one, one can’t help but feel as if they stepped back in time.

Heck, where else can one go and spot 200 elk from their porch?

The West was defined by its openness, its independence and freedom.

And maybe that spirit is what makes this part of the state’s history so magnetic.

“There’ll never be another time in history like the cowboy of the West,” Moore said. “It made the West.”