Four of the seven women on Arizona State’s women’s golf team are from Europe. One of those women is top amateur golfer Olivia Mehaffey from Belfast, North Ireland. (Photo by Krzysztof Urbanowicz via Creative Commons)

That would be the life of Arizona State’s Olivia Mehaffey, a freshman from Belfast, North Ireland. She joined the Sun Devils women’s golf team instead of turning pro.

ASU’s campus, weather, and program history all were enticing to Mehaffey. But the deciding factor on whether to turn pro was pretty simple.

“I didn’t think I was ready,” Mehaffey said. “You have the rest of your life to play, and I think I’ve always had it in my head like, ‘What if I went to America?’ . . . It’s something I wanted to experience.”

The experience didn’t start out well. In the beginning of last fall’s semester, Mehaffey struggled with just about everything, on and off the course. Adapting to a new country, culture and campus became challenging.

Mehaffey also had to learn how to deal with her homesickness, saying that being away from her family was the hardest transition of all.

It wasn’t long before all the adapting began to take a toll on Mehaffey mentally.

“I found it so difficult, personally,” she said. “I hadn’t played that much in America, and the course style is very different. Being a part of a team as well, the pressure that comes with that affected me.

“I put a lot of pressure on myself, and it really affected my game. My technique was pretty similar, and I think if I hadn’t struggled so much mentally, then my game would’ve been the exact same.”

Missy Farr-Kaye, head coach of the ASU women’s golf team, knew just what to do.

“I’m a big believer in individual meetings with our players,” Farr-Kaye said. “We get a chance to talk one-on-one. We talk a lot about things outside of golf. I kind of mentored her through the process, reminding her that she’s doing fine and she’s right where she’s supposed to be.

“She has very high expectations of herself, which I love, but at the same time I think she expected that coming in it was going to be easy,” Farr-Kaye said.

But sometimes you need more than a coach. 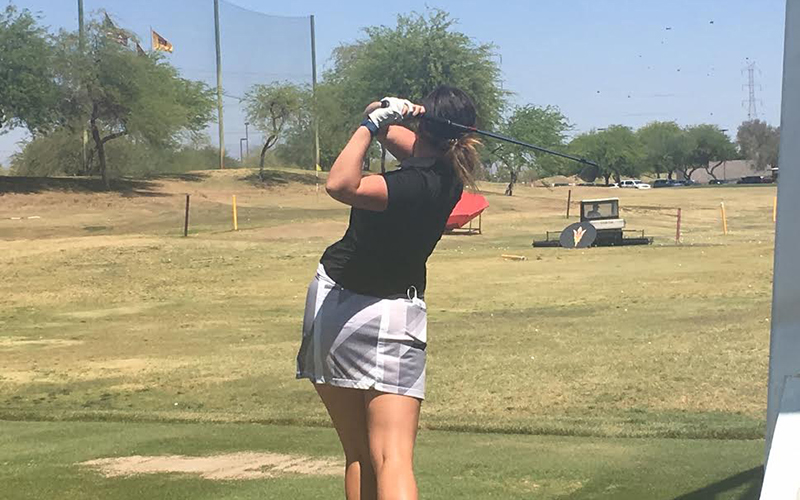 Four of the seven women on Arizona State’s women’s golf team are from Europe. Sophomore Linnea Strom is from Hovas, Sweden. Strom came to ASU with a high amateur ranking as well and finished her freshman season ranked sixth in the nation. She struggled with adaptation much like Mehaffey, and Farr-Kaye easily made the connection.

“Even though we’ve traveled a lot before, we hadn’t been so far away from our families for such a long time, so I think that was the hardest part,” Strom said. “It was exactly the same for us, it was mentally tough.

“Coach told her to talk to me about it, and maybe Olivia didn’t know I was struggling, so it was good that coach mentioned it to her,” Strom said.

Having someone who understood helped Mehaffey immensely.

“Linnea helped a lot,” Mehaffey said. “She struggled a bit her first semester and went through the same thing, so it’s been nice to have someone who understands how I feel. We have days where we both feel homesick, so it’s nice to have each other to go through that. It’s been really nice to have a best friend here.”

The pair could have been friends a lot sooner. Mehaffey, 19, and Strom, 20, are some of the best amateur golfers of their time in Europe. Because of their closeness in age, they played in many of the same tournaments and even played together a few times.

“We played the same tournaments since we were young because we played the best tournaments in Europe, but we were super scared to go over to each other and say ‘Hi,'” Mehaffey said with a laugh. “We could’ve been best friends for the past three years if we would’ve tried harder!”

The bond appears to have helped Mehaffey. She finished in the top 10 in her final three tournaments heading into the Pac-12 championships in late April. She also tied her career low (69) and finished tied for eighth in early April during the PING/ASU Invitational. The Sun Devils won that tournament for the first time in 10 years.

“It’s hard to win at home because there’s so much pressure and expectations,” Mehaffey said. “I think what we did on the last day was pretty special; we were only leading by three and we won by 20. We all pulled together, and I think that shows how close we are as a team and the things we are capable of doing.”

Strom said, “I told her, ‘It’s OK, it was exactly the same for me last year.’ You just have to give it time. It’s OK to play bad for a little and come back to it, and that’s exactly what she’s been doing.”

While Mehaffey may be doing well now, Farr-Kaye is positive it’s just the beginning.

“She has an intrinsic motivation that is very special,” Farr-Kaye said. “She’s motivated internally, not by anybody else, not by her parents, not by coaches. She has very high goals and things she wants to achieve, and she drives herself. That is very unique and very special, and it’s really going to help her be quite successful down the road.”

Down the road for Mehaffey means eventually going pro on the LPGA Tour, a dream she has always had. Despite her early struggles, in mid-April she sat at No. 5 in the world amateur rankings.

“I feel she’s right where she should be, she’s doing a fantastic job and I’m really proud of her, but she is by far her harshest critic,” Farr-Kaye added. “Her aspirations of playing professionally, she’s certainly capable of that.”