Residents say the well is one of two in the area, a couple miles from a small town on the Navajo Reservation. One well is a direct line to hotels. This one, leading to a one-spigot watering hole a few miles away, is the main water supply for about 900 people living nearby.

The first residents of the day, with big plastic bottles and buckets lining truck beds and packed into car trunks as they drive along miles of rock-strewn, dirt roads, start to arrive.

Verna Yazzie, who runs an Airbnb in Monument Valley, takes an 18-mile round trip when she needs water. She goes to the watering hole a few times a week and said she has to go off-roading for six miles to get to the nearest water source.

“We’ve never had running water for as long as I remember,” Yazzie said. “I usually haul water about three times a week for ourselves, for our livestock and for our planting. The difficulties are mostly the rough roads that we have to drive. It’s about nine miles one way from my house to the nearest water hole.”

Leaders of the Navajo Water Project, a non-profit working to bring more running water to Navajo homes in New Mexico and clean water to an Arizona school for youths who are disabled, estimate about 40 percent of Navajo Nation members don’t have access to running water in their homes.

The Navajo Nation is sprawled across Arizona, Utah and New Mexico in one of the most scenic, untouched areas of the Southwest. Parts of the reservation, the largest in the nation, also are removed from what some would call the acceptable trappings of civilization, with electricity and running water scarce in mostly rural areas.

Jason John, principal hydrologist for Navajo Water Resources, said it could cost cost nearly $70,000 each to get running water into some Navajo homes.

In tiny Oljato, where about 900 people live in this Monument Valley community, traveling to get water is a normal part of life, with some regretting it and others shrugging it off. Still others believe running water isn’t safe to drink.

“In one word, I’d say abysmal,” McGraw said. “It’s humiliating that it’s this difficult to give people in this country access to what’s an essential human right.”

Some Navajo Nation residents who have been without running water their entire lives don’t see it as a detriment but as part of their lifestyle.

Lionel John lives in Oljato but goes to college at Dixie State University in St. George, Utah. He had running water as a young child but, after he moved in elementary school to live with his grandfather hauled water until he graduated from high school.

“My mom raised us in Logan, Utah until I was in about third grade, and we moved back down here,” John said. “It was a lot different because when we were younger, we had electricity, running water.

“Coming back and moving here, we thought ‘where’s the light?’ ‘Where’s the running water?’ We had to learn how to use and bring in water. We had to use kerosene lamps. It’s a little weird at first, but you kind of get used to it after a while,” John said.

Jason John, the water-management official, said the approach to water access is affected by some members’ desire to maintain the tribe’s culture and identity.

“That is the big challenge,” said John, who is not related to Lionel John. “Normally when you go into communities in the West, there are cities. There are developed city hubs. In places where all the economic activity occurs, but on Navajo (land), we are very rural because of the way of life that we have known for a very long time.”

“We travel about seven miles to the nearest water hole,” Phillips said. “In the summertime, there’s a good one- to two- hour wait time, but we’re used to it. We’ve always done this, since we were small.”

An issue of trust

Some members of the Navajo Nation wouldn’t use running water even if they had access, because they believe it’s been contaminated by now-abandoned uranium mining.

“You need to be very compliant with the laws,” Holiday said. “They don’t seem to be able to pick out the whole total reality of the news. The reason why they don’t do that is money.” 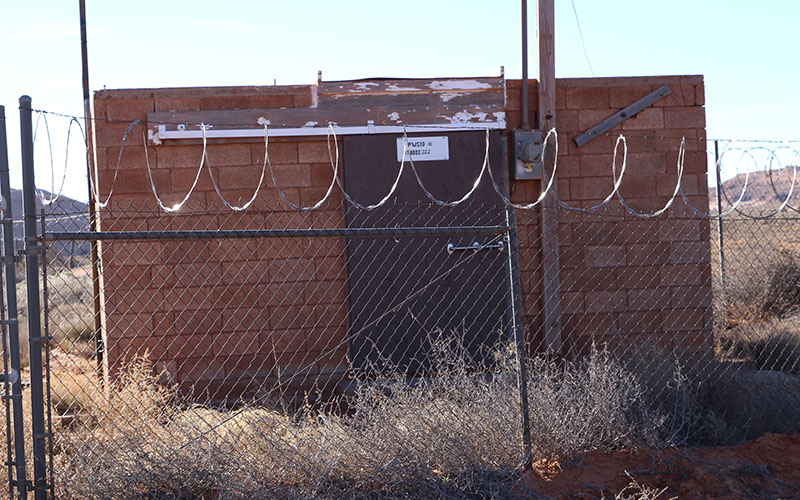 The Goulding Well on the outskirts of the Oljato community near Monument Valley, is the main water supplier for residents. (Photo by Ethan Millman/Cronkite News)

“We have to haul in water just to live off of,” Mark Holiday said. “My mother, she has running water, but she doesn’t want to use it because she doesn’t know if it’s contaminated or not. She shut everything down.”

Jason John said he understands residents are worried about water contamination but said money and people to handle problems are in short supply. Trying to bring infrastructure, materials and equipment to rural areas costs thousands per home.

“That is an issue with the Navajo EPA,” John said. “They struggle with funding for staffing, and it’s pretty easy to see that. The challenge to a rural area is that it’s hard to bring qualified people in because it’s not easy living out there in a rural area. If you grew up in a large city, you’re used to certain amenities and they’re used to having the ability to access housing, food and utilities. But to work on the Navajo Nation, you have to be comfortable not having those amenities you find in a larger city.”

“We do not building drinking water infrastructure,” Barney wrote in an email. “Access to safe water is the responsibility of even a homeowner.”

Some nonprofits have begun to work with the Navajo tribe to improve water access. The Navajo Water Project, an initiative from Los Angeles-based water advocacy group Dig Deep, has been working on Navajo land in New Mexico since 2013.

George McGraw, the founder of Dig Deep, said he had been familiar with water shortages in continents such as sub-Saharan Africa. A donor who wanted her money earmarked for the United States led him to discover water-accessibility issues on the Navajo reservation. 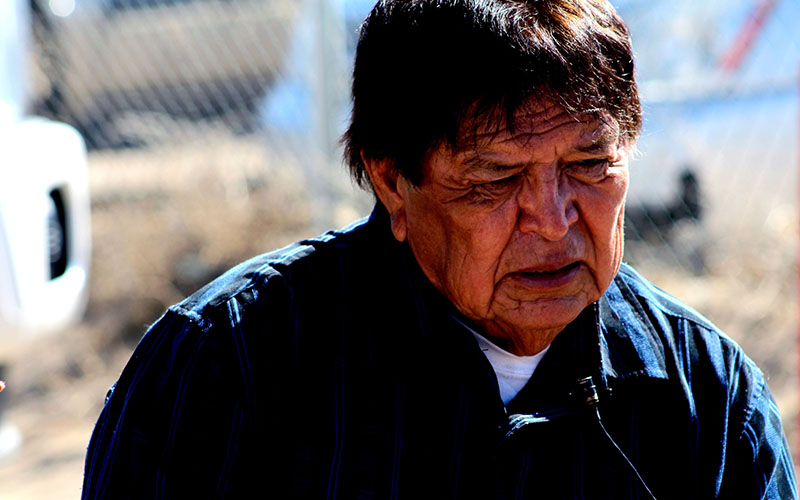 Gregory Holiday, a member of the Navajo Nation, said even if he had access to running water he doesn’t trust that it is safe to drink, saying longterm uranium mining in the area contaminated the water. (Photo by Devon Cordell/Cronkite News)

“I was so surprised to see circumstances similar to in Africa,” he said.

Since starting their work in New Mexico, the project team has installed water cistern systems in 46 Navajo homes. They also streamlined water delivery routes in the area. By next year, the team wants to create a project in Arizona similar to their New Mexico program.

McGraw said more work needs to be done, not just by nonprofits but by residents, tribal and federal governments.

“A lot of these changes come from the community,” McGraw said. “Rural areas should work with the local government and with nonprofits like ours. We want a coalition of people to come together and develop more projects like these at a small, local scale.”

In the meantime, one small step might make a difference to Yazzie and other Oljato residents, she said.

“What I would like to see change is to just have for the Valley residents to somehow have a central location where we can get water,” Yazzie said. “Even two miles does make a difference rather than coming all the way here.”