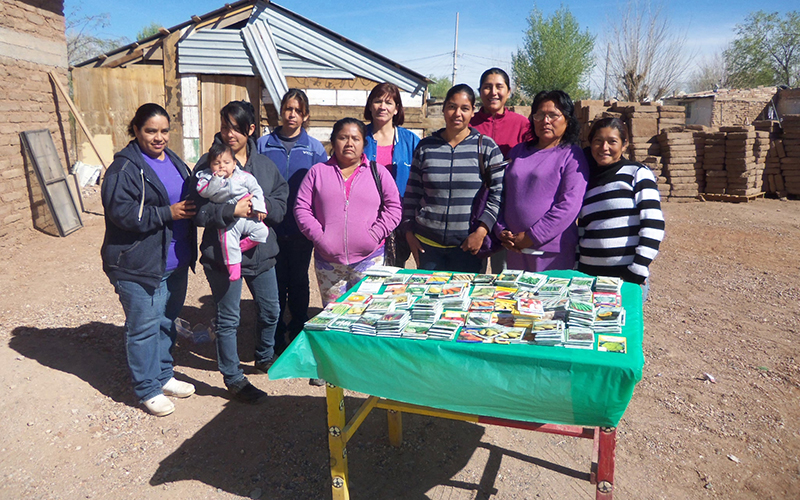 Members of DouglaPrieta Works plant and tend to various fruits and vegetables at the group’s garden in Agua Prieta, Sonora. (Photo courtesy of Dwight Metzger)

The group – DouglaPrieta Works, a combination of Douglas, Arizona, and Agua Prieta – takes a holistic approach to providing the women these skills.

Linda Knox, a group coordinator in Douglas, said the “anchor” of the group is a community garden in Agua Prieta where the women grow vegetables and tend to fruit trees. The size of the group is around eight women, though the number fluctuates as they come and go. They meet each week for classes, including gardening, and encourage the women to have their own home gardens.

She said the women are grateful for their involvement in DouglaPrieta Works.

“There is almost no outside support,” Knox said. “What they’re doing is just what they can do on their own, which we actually think is pretty good because it encourages more of that self-sufficiency that was the goal all along.”

All the women in the group live on the Mexican side of the border, and all the volunteers that help coordinate their programs are on the U.S. side. The group’s programs change often, but one of the current major programs is sewing.

DouglaPrieta was created from a partnership between a man who lived in Agua Prieta and was concerned about the lack of economic independence in the area and a Quaker woman who lived in Douglas, Knox said.

One of the aims of the group, according to its website, is “to reduce the cost of living and at the same time build an ethic of mutual aid among neighbors in order to reduce dependency on weak job markets, government assistance, charity, and border crossing.”

The founders have since both moved, and members of the group have also come and gone. One woman, Rosalinda Sagaste, said she is the only member who has been there since the beginning. 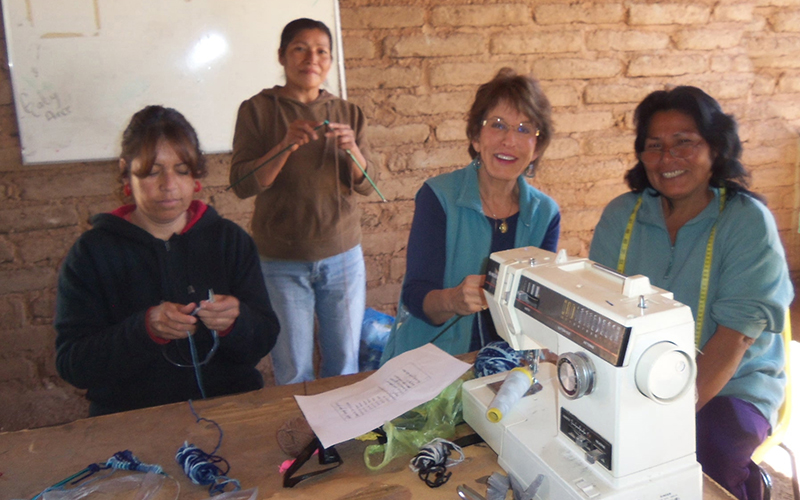 Sagaste said in Spanish that the group empowers women to help their communities. She said her own neighborhood, where DouglaPrieta works began, is the poorest in town.

She said the group allows the women to make a little bit of money. She said the women’s husbands work, so it’s not the only source of income for their families. However, it’s the only way the women themselves make money.

DouglaPrieta is open and accessible to the community, Sagaste said, with members involving their children in various activities the group has planned for different days of the week.

The group works with a printer in Tucson, Dwight Metzger, who compensates the women for sewn goods he receives. They sew, crochet, and knit clothes, placemats, table runners, and more, Knox said. Some of it is featured in a gallery in Douglas.

Knox said the women even sewed an order of Trump voodoo dolls last summer for one of Metzger’s customers. She said the women are very aware of current events in the U.S. and thought it was hilarious.

Metzger said it’s important to him that the products the women sew are ethically made and of a high quality.

“It’s a really terrible paradigm that Americans have just chosen to ignore in pursuit for more and more — this is just the total opposite of that,” he said. “To have something like this close to us it’s really a special thing. When you meet the women, you can understand how … it is important for their lives”

Metzger has worked with DouglaPrieta Works for 10 years. Over that time, he’s seen the group host programs in woodworking, adobe brick making – bricks which they used to build a community center for their activities – cooking, computer training, and animal husbandry. He said last year the women created an underground breeding pen for rabbits.

When it comes to sewing, he said the women get to work from home so they can take care of their families at the same time.

“I only wish we had more and more work for them and more people thinking about where the products they buy come from,” Metzger said.

He said he’s planning to open a brick-and-mortar shop in Tucson in the next few months where he will devote a section to selling the women’s work.

Metzger said focusing on sustainability and self-sufficiency is especially important in “an area that’s been so subjected to exploitation and poverty.”

“While it doesn’t lift everybody out of that by any means, it’s certainly a really good example of what people can do if they come together and try to create something different,” he said. “They’re putting a lot of heart and soul and hard work into it.”