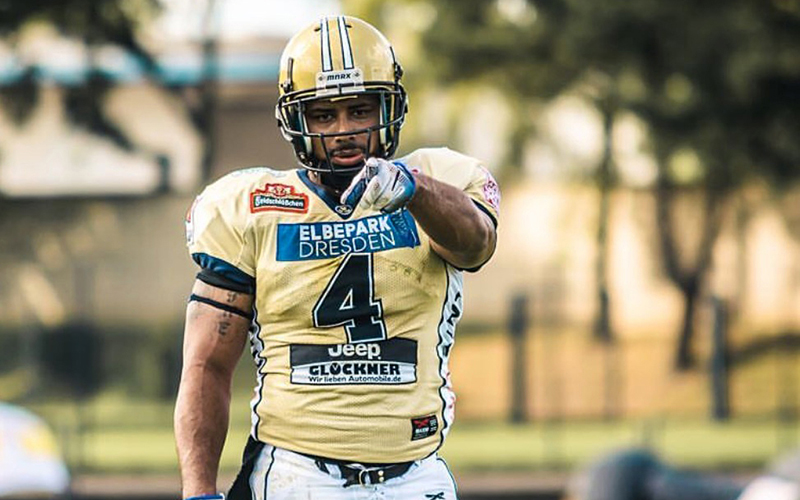 Trevar Deed during one of his games while playing for the Dresden Monarchs in Dresden, Germany. (Photo courtesy of Trevar Deed)

Founded 23 years ago by Kevin Pakos, the AZFL provides athletes 18 years and older an outlet to play the game they adore. From high school graduates to players fresh off of a college career, the league appeals to many with the common goal of “keeping the dream alive.” 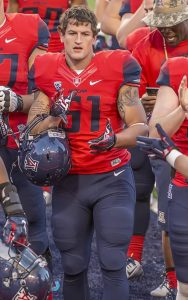 Sweet, a linebacker, joined the Tucson Soul Patrol of the AZFL in 2013. After one season, he walked onto the University of Arizona football team.

“I accomplished a dream,” Sweet said in a telephone interview. “Playing in a league and being able to get the pads cracking again was a big part of it.”

Sweet made just one appearance in a game for the Wildcats. He started on special teams in 2014 against the University of Southern California.

Giving players such as Sweet an opportunity is one key reason Pakos began the league, which plays from January through May.

“We started this league to get players back on the field,” Pakos said. “We realized there were a lot of kids who didn’t get looked at in high school who wanted to try and go to the next level.”

To maximize the opportunities for players in their league, Pakos and his wife, Dana, sought advice from local community colleges. Eligibility for those colleges was a main concern.

According to the NCAA eligibility requirements, “All incoming student-athletes must be certified as amateurs. All student-athletes, including international students, are required to adhere to NCAA amateurism requirements to remain eligible for intercollegiate competition.”

Players in the AZFL remain amateurs because they are not compensated for their play. In fact, they must pay a league fee of $150 and a team fee that ranges from $200 to $300, along with providing their own equipment and their own insurance in case of injury.

Thus, said Pakos, his league is commonly referred to a “working man’s league.” Players suit up and play on Saturday before heading back to work on Monday to earn a living.

Despite the risk factors, when Sweet returned home from Afghanistan, he never gave up his dream.

“I felt empty going back to school and not being a part of a team or competing,” he said. “I started getting back into baseball and training to be a pitcher again.”

Before enlisting, Sweet was a pitcher for one season at Grand Canyon University. When he returned from Afghanistan, he was 26 and remained in the reserves. He enrolled at Pima Community College in Tucson.

Sweet joined the Pima baseball team, but he quit after one semester.

“I told my coach that I had never quit anything in my life,” he said. “I had hoped it would satisfy that desire and love, but it wasn’t fulfilling for me.”

Sweet obtained his associate’s degree before he enrolled at the University of Arizona to pursue a career in medicine. Just before he transferred, he realized he needed to find a new outlet to fill his athletic void. He turned to the other sport he had played in high school: football. That’s how he wound up in the AZFL.

Sweet’s refusal to give up mirrored that of a player named Trevar Deed.

During his junior and senior seasons at Camelback High School, Deed was a halfback and defensive back. He was named all-conference both seasons.

Deed enrolled at Eastern Arizona College for the 2004 season and played running back as a freshman. During a workout after that season, he broke his collarbone. He returned to Phoenix with the belief that he would no longer play football. 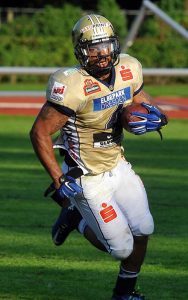 Trevar Deed runs the ball during one of his games while playing for the Dresden Monarchs in Dresden, Germany. (Photo courtesy of Trevar Deed)

When his injury healed, Deed was approached by a high- school teammate about the AZFL. He was skeptical but joined the league for the 2005 season with the Tempe Rams.

“I thought it was pickup football at first,” Deed said in a telephone interview. “Then I realized how good it could be for me.”

For his second season, the Rams coaching staff — realizing Deed’s potential — challenged him to rush for more than 1,000 yards. It was just his second season with the Rams, and it would prove to be his last.

“My coach told me he would help me get a scholarship to a Division II school,” he said. “I rushed for over 2,000 yards that year. It was a crazy experience to go through.”

As promised, the coaching staff helped him make a highlight tape from that 2006 season. Shortly after, Delta State University, a Division II school in Cleveland, Mississippi, offered him an athletic scholarship.

In all three years Deed played for Delta State, the school won its conference championship. Then he played pro football in Germany for five years until he retired after last season. Thus the AZFL paved the way for Deed to play eight more years of organized, competitive football.

Deed’s path to collegiate athletics resembles that for players in another amateur football league in Arizona, the Arizona Gridiron Football League. Like the AZFL, the AZGFL provides game film for players, an important piece of the puzzle for a player looking to jump to the next level.

“We hire a film company for our games to provide high definition film for the players,” said Tim Johnston, who runs the league. “It is key for players to have film to show to colleges and professional teams.”

Founded 15 years ago, the AZGFL has also seen its fair share of players join the college ranks. Most recently, Chris Johnson of the Arizona Desert Eagles earned a scholarship to NAIA member Peru State in Peru, Nebraska. Braeden Loftus-Fox from the Phoenix Phantoms has started working out with Glendale Community College.

Both the AZFL and AZGFL have 10-game regular seasons that run from January through May. They use high-school fields for games. While most games in each league are in Phoenix, each league has two teams from Tucson. The AZFL also has a team in Prescott. With 10 teams in the AZGFL and nine in the AZFL, players have options when picking a team.

The AZFL and AZGFL are trying harder to appeal to high-school players who can’t find a college team to join.

Jake Swingler, the defensive line coach at Desert Vista High School in Phoenix, has played in both leagues and recommends them to some of his players. He says the AZFL and the AZGFL benefit players who have not developed as quickly as others.

“If they didn’t get highly recruited out of high school or are late bloomers, I would suggest they play for a year or two,” Swingler said. “They have the chance to get more physically mature before going to junior college or further.”

But Sweet, who found fulfillment in the AZFL after his tour in Afghanistan, sees an even more basic purpose in this brand of football.

“It allowed me to have fun,” he said. “Going out there and being in that environment was the most beneficial part for me.”

Although sidelined by knee injuries, Sweet embraces the camaraderie amateur football leagues present to players — regardless of where it may lead.

“It’s football, man,” he said. “It’s a unique game. No matter where you play you only get one game a week. Just go out there and play ball.”