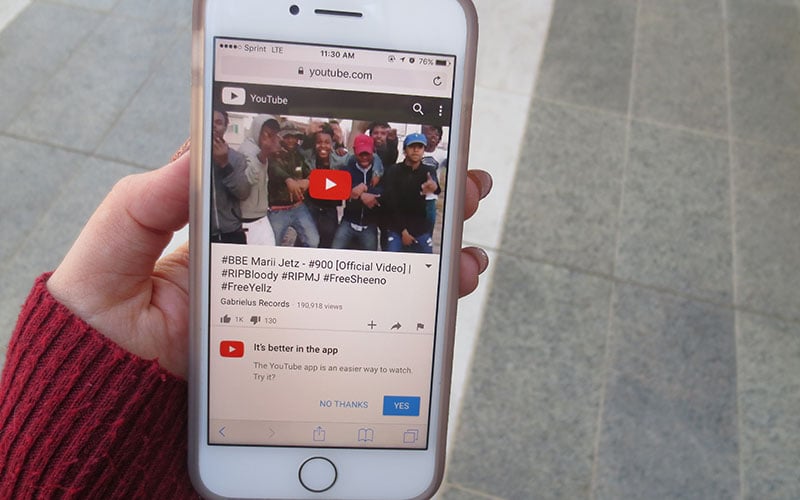 The BBE 900 gang in Cleveland, Ohio, invested money made illegally to create rap videos that were posted on social media sites and used to recruit new members, build the BBE 900 brand and raise their intimidation factor, according to The 2015 National Gang Report from the National Gang Intelligence Center. (Photo by Caity Hemmerle/Cronkite News)

PHOENIX — About one in five 8th graders in Arizona say “it would be cool” to belong to a gang, according to the 2016 Arizona Youth Survey of more than 57,000 students statewide. The same goes for 17 percent of 10th graders, and 13.1 percent of 12th graders.

Teens’ growing use of social media may be contributing to interest in gang activity.

“The dangers have increased exponentially,” said Phoenix Police Sergeant Vincent Lewis. “We continue to encourage parents and caregivers to have an active role in their child’s life with face-to-face interaction rather than electronic communication.”

The most recent version of the National Gang Report was released in 2015 from the National Gang Intelligence Center and shows that gang use of technology and social media has significantly increased since 2013. More than 54 percent of agencies report integrating social media into gang investigations within the past two years.

Now law enforcement officers in Arizona are trying to integrate social media strategies across their efforts to prevent and track teen gang involvement.

The BBE 900 gang in Cleveland uses Youtube videos for recruitment and brand promotion.

According to the NGIC report, social media sites provide gangs with platforms to recruit new members, either through direct communication or indirectly through videos that promote the gang’s brand and boast the benefits of the gang lifestyle.

For example, the BBE 900 gang in Cleveland invested money made illegally to create rap videos that were posted on social media sites and used to recruit new members, build the BBE 900 brand and raise the group’s intimidation factor.

Gang members are also increasingly moving to messaging platforms, such as Snapchat, kik and WhatsApp, to communicate with each other. These apps provide instantaneous communication similar to Short Message Service (SMS) text messaging, while providing more anonymity, according to the NGIC report.

Teens may be especially at risk for falling victim to online recruitment. According to a 2015 Pew Research study, 92 percent of teens said they use the internet daily. This same study showed that 57 percent of teens have made new friends online, unaware of who that new friend may really be or what their intentions are.

Andrew LeFevre, Arizona Criminal Justice Commission executive director, said that schools in all 15 Arizona counties receive an individual report of their data from the Arizona Youth Survey, and school officials may use this information to adjust programs at their school.

The ACJJ, an organization that reports on functions in Arizona to assist the state’s criminal justice programs, conducts the biannual AYS, which includes responses from more than 57,000 8th, 10th and 12th grade students from all 15 counties in Arizona.

School resources officers are intended, in part, to prevent interest in gang involvement. They are assigned by the city of Phoenix and are expected to spend approximately 80 percent of their time on campus.

Officer Jason Groen, a school resource officer at Mary Mcleod Bethune School in Phoenix, delivers a gang-related curriculum to his students, and he discusses how social media may affect them.

“In this neighborhood, there are kids who say that their aunt, uncle or brother have been in gangs, so I do teach basics about how you get into gangs: what they look for or the type of person they try to recruit,” Groen said.

The Mary Mcleod Bethune School is one of the Arizona schools that follows a gang-prevention curriculum. (Photo by Caity Hemmerle/Cronkite News)

Groen said he teaches about social media because a lot of kids look to the media, whether it’s professional sports or things they hear on the news, and they take that for 100 percent truth.

“It usually is truthful,” Groen said. “I just always teach them that we have to research it. We have to find out what brought it to that point and what they’ve done after that point. Don’t just rely on a one minute segment. After that, form an opinion.”

Groen also conducts a Wake Up! program at his school.

“We meet once a week,” Groen said. “We talk about life. We talk about drugs, gangs, current news, things that are happening, things going on with them.”

Groen said the Wake Up! program is not as structured as a classroom setting usually is. He tries to make the students feel like they’re more grown up.

Groen said that he tries to give students basic knowledge so they don’t have to make a hard choice when it comes to getting involved with a gang.

“We live in an age where everybody uses social media in one form or another,” Hill said.

Although social media can be a good place to gain information for an investigation, Hill said he doesn’t like starting investigations that way.

“For us, it’s a good way to identify or help identify gang members and particular associates of that gang member, but I don’t use it as a single focal point for identifying gang members,” Hill said.

In order to be documented as a gang member in Arizona, you have to meet two of seven legal criteria. One way to meet a criterion is through electronic correspondents, like Facebook posts, but it could also include self proclamation and photographs, gang colors, clothing and tattoos.

Hill said that even though a Facebook profile may contain a self proclamation, photographs of men in gang colors, pictures of gang tattoos or pictures with other gang members, he considers this information to meet only one legal criterion because it all comes from one source.

“I feel that you can be anything you want to be on the internet, just like with my undercover Facebook accounts I can pretend to be something,” Hill said. “It doesn’t mean I am that thing. I have a problem with documenting somebody strictly off of a social media account without physically talking to them, meeting with them or physically identifying them outside of that source and verifying that information.”

Hill added that being documented as a gang member, in and of itself, is not a crime, and being a gang member does not necessarily mean the person will be under any sort of surveillance. But in the prosecution of gang crime, it is helpful, and sometimes critical, to be able to show a pattern of behavior and association by gang members.

He said he sees a lot of people who claim to be gang members or involved in criminal activity on social media because they think it makes them look cool, when in reality, they are not.

How communities are being educated

“As formats continue to evolve, parents have a difficult time keeping up with their kids when it comes to this new way that kids interact with whomever online,” Lewis said.

He said the Phoenix police department covers topics from basic online safety, which would include not disclosing your identity and staying off of inappropriate sites, to monitoring your child’s interactions and chats.

Sergeant Bernie Stefaniak with the Arizona Department of Public Safety said that the Gang and Immigration Intelligence Team Enforcement Mission (GIITEM) has a unit that provides training to the public and law enforcement.

“There’s so much done on social media now that you have to keep up with it, or at least try to be as up to date as you possibly can,” Stefaniak said.

Stefaniak used the comparison of someone interested in motorcycle riding who constantly watches YouTube videos of people riding motorcycles to children who may become interested in gangs or violence and then search for related videos through social media.

“Obviously, social media has an impact, but how much of an impact is each individual person’s decision in the end of what they do with whatever they learn (on social media),” Stefaniak said.

He said that GIITEM employs detectives and officers who take information to the community and schools. Still, he said the curriculum and resources offered to schools and communities are not always effective.

“You can teach people all about alcoholism, but does it guarantee whether they’re going to become an alcoholic or drink responsibly? Each individual person is different,” Stefaniak said.