A new report shows that veterans going back to school on the GI Bill proceed to graduation at a significantly higher rate than other “nontraditional” college students. And Arizona’s public colleges outpace the national rate for vets. (Photo by John Walker/Creative Commons)

WASHINGTON – Tim Rogers, 39, is scheduled to graduate next week with dual bachelor’s degrees, in social work and in public service and public policy, one of 649 veterans who applied for graduation at Arizona State University this semester.

The Army veteran and father of four said he is excited to be done with school, but brushed off any special attention.

“Most veterans, when they go to school, they are highly motivated,” Rogers said.

That was the finding of first-ever research published earlier this year by Student Veterans of America, which reported that veterans are earning college degrees at a higher rate than other nontraditional students.

According to the National Veteran Education Success Tracker released in February, 53.6 percent of veterans who used the Post-9/11 GI Bill between August 2009 and September 2013 graduated before 2015. That compares to a six-year graduation rate of about 32 percent for other nontraditional students, said Chris Andrew Cate, vice president of research at Student Veterans of America.

Nontraditional students are typically those who have dependents, work full-time or are outside of the traditional 18- to 24-year-old college age window.

And veterans at Arizona’s public universities appear to be doing better than their counterparts nationally, according to officials at the schools that provided information. More than half of the 853,000 veterans who used the Post-9/11 GI Bill enroll in public nonprofit colleges like the state’s universities.

The University of Arizona has 3,100 “military affiliated” students this year, and boasted a 57.1 percent veteran graduation rate as of last year, according to university spokeswoman La Monica Everett.

While only 10 percent of ASU’s veteran population in fall 2009 was composed of first-time freshmen, 58.3 percent of them graduated within six years of enrolling – nearly 5 percentage points more than the national average.

But Steve Borden, the director of the Pat Tillman Veterans Center at ASU, noted that many veterans at ASU are transfer students. Those who transfer in as freshmen or sophomores have a 59.3 percent graduation rate, while those who start as a junior or senior at ASU have an 81.9 percent success rate. 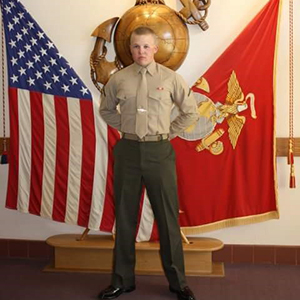 Christopher Wood, here at Marine Corps boot camp graduation, enlisted when he was 18 and had no interest in college. Now 26 and out of the Marines, he is a student at Arizona State University and calls the GI Bill “the single biggest benefit” of his service. (Photo courtesy Christopher Wood)

Rogers is one of nearly 6,000 military affiliated students enrolled at Arizona State. With a student population of approximately 94,000, nearly 6 percent of currently enrolled ASU students have served, or continue to serve, in the U.S. military, according to an ASU official.

The Department of Veterans Affairs has collected data similar to NVEST’s, but only for two-year colleges, not four. It commended the NVEST research, and said it hopes to complete more of its own in the future.

“The NVEST research is an important study that shows many veterans truly excel in the academic environment,” the VA statement read. “We congratulate Student Veterans of America for this significant groundwork.”

According to NVEST, more than a quarter of GI Bill students earn a degree in the business field, followed by STEM – science, technology, engineering and mathematics – and health degrees.

But at ASU, Borden said the most popular field is STEM, with more than 1,700 GI Bill students enrolled in the Ira A. Fulton Schools of Engineering this year alone, more than a quarter of all the military personnel enrolled at Arizona State.

Rogers said that military experience does make college different in some ways, but that “the only difference between a veteran and a civilian is the experience they have in the military.”

While ASU’s veteran enrollment is “significantly higher” than other state schools, Borden notes that Arizona State’s overall student population is also much larger than Northern Arizona University’s or the University of Arizona’s. But, as a Navy vet himself, Borden said “the type of students attracted to ASU, the programs offered here, and the services offered to them” all contribute to a “large, growing, successful population” of veterans at the school.

ASU journalism student Christopher Wood had no interest in college when he was a high school senior. At age 18, he enlisted in the Marine Corps.

Now 26, and with his military days behind him, Wood said the GI Bill has been “the single biggest benefit” of his service. After transferring to Arizona State in January 2015, Wood is about 30 credit hours away from earning his bachelor’s degree.

Wood said that the support he received from both the VA and the Pat Tillman Center has helped him be successful in college. But above all else, his GI Bill benefits give him a sense of security, reducing some of the stress and letting him focus on his education, or “job training,” as he calls it.

“We (veterans) just get stuff done,” Wood said. “We’re used to working 18- to 20-hour days, going without sleep, without water … so when all you have to do is pull an all-nighter to study for a test, it’s not that hard at all.”