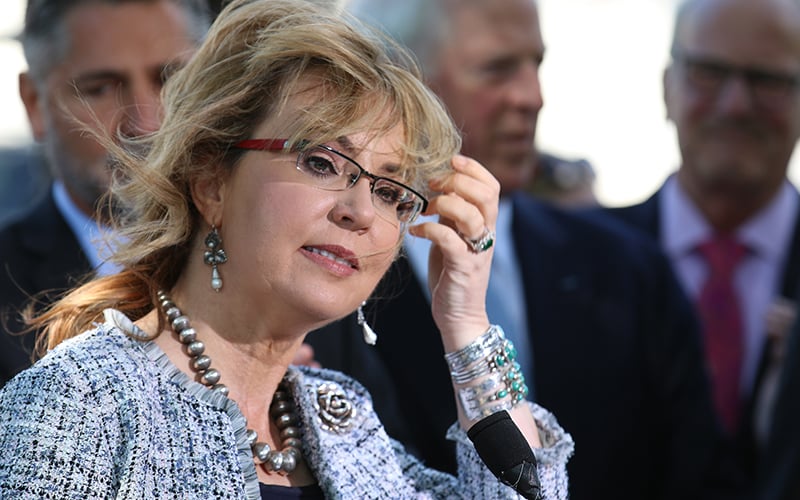 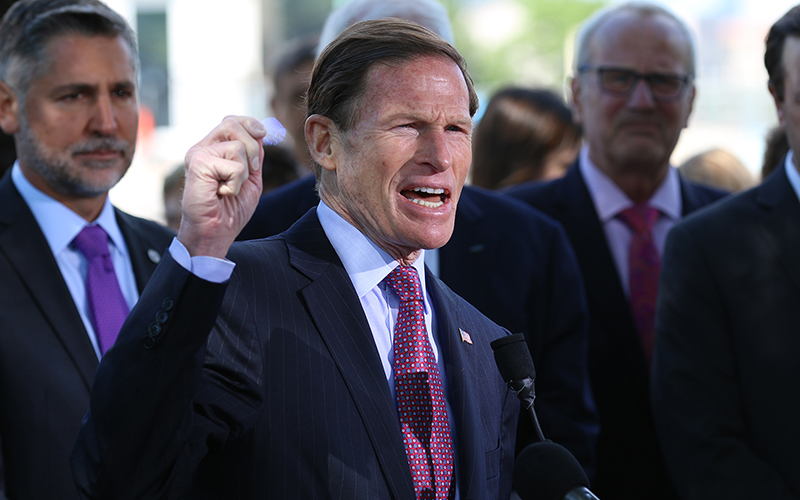 Sen. Richard Blumenthal, D-Connecticut, speaks at a rally with former Arizona Rep. Gabby Giffords where they accused the GOP of pandering to the gun lobby. (Photo by Andres Guerra Luz/Cronkite News) 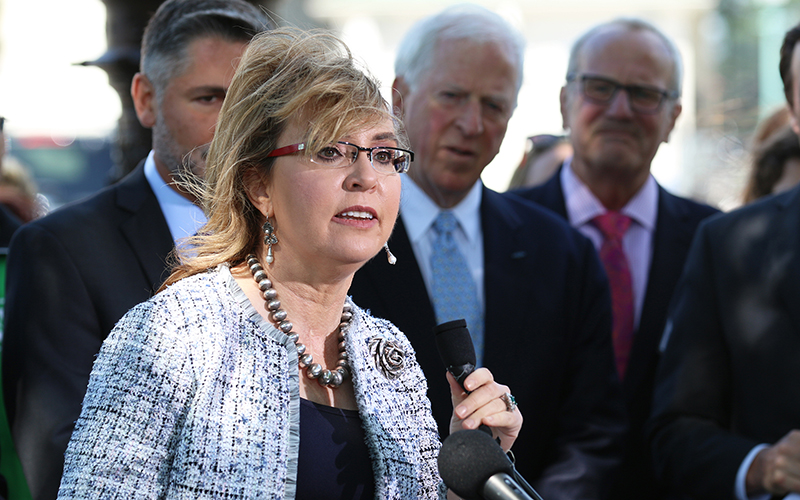 Gabrielle Giffords, herself the victim of a Tucson shooting that killed six and injured 12 others, called on Americans to fight efforts to loosen gun restrictions. (Photo by Andres Guerra Luz/Cronkite News)

WASHINGTON – Former Arizona Rep. Gabrielle Giffords joined House and Senate Democrats Wednesday to accuse Republicans of pandering to the gun lobby with bills to do away with gun-free school zones and deregulate silencers, among other measures.

Giffords, still struggling with the effects of a 2011 shooting that left her critically wounded, called on Americans to have to courage to fight against the measures.

“Stopping gun violence takes courage,” said Giffords, at a news conference on Capitol Hill. “Now is the time to come together – Democrats, Republicans, everyone.”

The remarks came a week after President Donald Trump told the audience at a meeting of the National Rifle Association in Atlanta that “you came through for me, and I am going to come through for you.”

Advocates at Wednesday’s rally called Trump’s speech “pandering” to gun lobbyists and pointed to the GOP-backed bills – including one relaxing background checks for veterans and another that would require reciprocity between states that allow concealed carry of weapons – as proof. They said those proposals serve gun lobbyists while threatening public safety.

But gun-rights advocates like Rep. Paul Gosar, R-Prescott, fired back, charging that Democrats who claim Republicans are serving the “NRA boogeyman” are either “lying or ignorant.”

Republicans are not serving the gun lobby but “are beholden to our constituents who demand that we protect the Second Amendment and their God-given right to defend themselves and their families,” Gosar said in a statement Wednesday.

He is a co-sponsor of the House version of the Concealed Carry Reciprocity Act, along with Arizona Reps. Martha McSally, R-Tucson, Andy Biggs, R-Gilbert, and Trent Franks, R-Glendale. Arizona Republican Sens. Jeff Flake and John McCain cosponsored the Senate version of that bill.

Lars Dalseide, a spokesman for the National Rifle Association, said that the reciprocity bill allows people to maintain their Second Amendment right while traveling between states.

“It’s a matter of protection,” Dalseide said. “This does not allow criminals to carry firearms.”

He said right now, if someone has a permit in one state and travels to another state for work or family, they would not be allowed to carry their concealed firearm. The bill would help a demographic that he said is Made up of the “most law-abiding” citizens out there, who “take their responsibility, as well as their right, very seriously.”

But gun-control advocates called the reciprocity bill “federally mandated concealed carry,” saying it would require that every state recognize the gun laws of other states when gun owners visit.

Peter Ambler, executive director of Americans for Responsible Solutions, which Giffords founded after a series of high-profile mass shootings, said the reciprocity bill would “undermine the authority of each state to regulate who carries firearms.”

Ambler said other bills that advocates are looking at include those that would legalize silencers and repeal gun-free school zone restrictions. Deregulating silencers under bills called the Hearing Protection Act, Ambler said, would reduce people’s ability to recognize when a shooting occurs and tell police officers about the crime.

Pro-gun experts like Dalseide call the term “silencers” misleading, as putting a suppresser on a handgun would make the shot barely louder than a chainsaw or a jackhammer. But advocates like Ambler said the bill would still hinder law enforcement efforts and risk public safety.

“Imagine a silent massacre and how terrifying and deadly that would be,” Ambler said.

Many of those at Wednesday’s rally have been touched by mass shootings, and referenced them in their remarks.

Giffords was the target of a January 2011 shooting in Tucson shooting that killed six people and injured her and 12 others. She told the crowd outside the Capitol that she saw “great courage” when her life was “on the line,” and called on Americans to show similar courage to ensure responsible gun laws.

Rep. Val Demings, D-Florida, who served as Orlando’s police chief, recalled the mass shooting that killed 49 people at the Pulse nightclub there last year and remembered when Trump said he would stand up for law enforcement.

“If you really want to stand up for law enforcement, then help us keep guns out of the hands of people who never should have them in the first place,” Demings said.