At their home field, Sloan Park in Mesa, the Cubs drew 251,899 fans for their 17 exhibition games. That’s an average of 14,818 per game at the park, which has a listed capacity of 15,000. According to the Cactus League, five of the top seven crowds in league history came at Sloan Park this spring.

The Cubs were the visiting team when five Cactus League teams set their respective all-time single-game attendance records. Cactus League President Jeff Meyer said those teams were the Arizona Diamondbacks and Colorado Rockies at Salt River Field in Scottsdale, the Oakland Athletics at Hohokam Stadium in Mesa, and the Cincinnati Reds and Cleveland Indians at Goodyear Ballpark.

The Cubs contributed mightily as the Cactus League set an attendance record this year with 1,941,347 fans.

“It was a record-breaking year in (the league’s) 70th anniversary (year), so we’re very pleased,” Meyer said.

For Cubs fans visiting Arizona, the proximity of other Cactus League teams made it easy to see their team whether home or away. With all 15 Cactus League teams located in the Valley, distance between spring training facilities in Arizona is not a major logistical issue.

“It’s only about an hour and 10 minutes from Hohokam in Mesa to the City of Surprise and Surprise Stadium,” said Meyer, citing the longest trip in the Cactus League. “From a fan perspective…imagine the excitement they have without having to spend that extra time on the road.”

That proximity is the major difference between the Cactus League and its Florida counterpart, the Grapefruit League. The two leagues are equal in big-league teams — 15 apiece — but not in driving distances.

Here is an extreme example of the Florida distances: From West Palm Beach, home of the Houston Astros and Washington Nationals, it is approximately 225 miles across the state to Dunedin, where the Toronto Blue Jays train.

Both West Palm and Dunedin are a 2 1/2-hour drive from Lee County, in southwest Florida, where the Boston Red Sox and Minnesota Twins are based.

Betsy Clayton, communications director for Lee County, said, “Sure [fans] come here and they know they have to drive a little bit farther than if they went to Phoenix, but if you do go to some of these other cities in Florida to watch baseball, because Florida is so geared toward tourists and visitors, there’s so many other things to do it’s not like there’s anything to complain about.”

Attendance totals also indicate that in Florida fans come from out of state to see their favorite teams play their home games. It doesn’t really matter how far away the road games are.

Like the Cactus League, the Grapefruit League has been recording a million-plus fans in attendance each season for the past decade.

According to the Florida Sports Foundation, it is the 15th time in 18 years that spring training attendance in Florida has surpassed the 1.5 million mark. 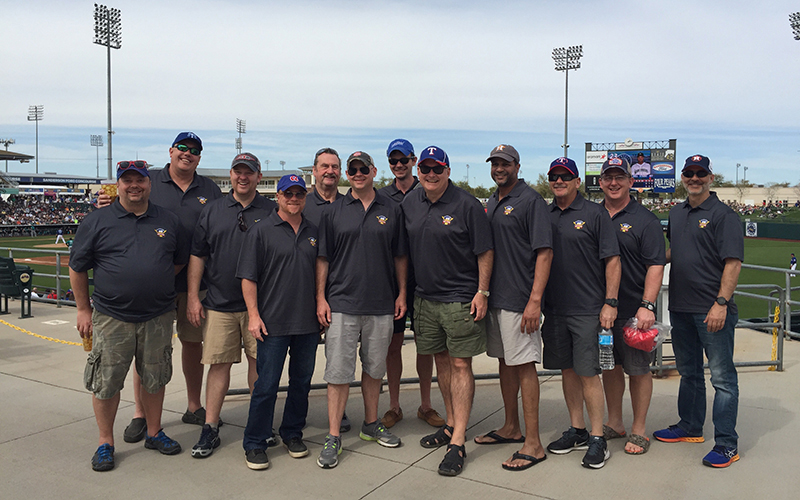 Andrew Oppmann’s ‘3-B Club’ attends a spring training game between the Seattle Mariners and Texas Rangers at Surprise Stadium in Surprise. (Photo by Ryan Clarke/Cronkite News)

Florida Sports Foundation spokesman Nick Gandy alluded in an interview to the similarities between the Red Sox and Cubs. Both are traditional franchises that in the 21st Century ended long world-title droughts.

“They’re both teams that date back to the early 1900s in terms of several generations of fans passing down the tradition,” Gandy said of the Red Sox and Cubs.

Within the last several years, each has moved into new spring training stadiums that had larger seating capacities than their former ones — one more way to increase the fervor around the two teams.

In 2012, the Red Sox moved to JetBlue Park, a stadium that can hold nearly 11,000 fans. During spring training this year, the Red Sox averaged nearly 10,000 fans per game.

“When the team is more competitive, that’s where we see the attendance being greater,” he said.

In both Arizona and Florida, spring training has become big business.

A study conducted by FMR Associates for the Cactus League said that the 2015 spring-training season resulted in more than $809 million in economic impact for the state.

Included in that number is more than $544 million in total expenditures from out-of-town Cactus League attendees alone, according to the report. The report found that six of 10 fans interviewed in the study were from outside Arizona, and that two-thirds of these attendees indicated that spring training was the primary reason for their visit to Arizona.

Florida has seen similar results, despite smaller attendance numbers. In a 2009 report conducted by Bonn Marketing Research Group, overall attendees — classified as those spring training attendees who did not live in the same county as the stadium hosting the game they attended — represented more than $683 million in total spending. That represented three-fourths of all spring-training attendees in 2009.

And at least a handful have decided they prefer Arizona.

Andrew Oppmann is a spring training enthusiast from Tennessee. He and his group of 10 to 15 friends have been attending spring training games in both the Cactus and Grapefruit leagues for a quarter of a century.

“Everybody comes to spring training for different reasons, but for us personally, we’re less motivated by tracking the champions and more motivated by the fan experience,” Oppmann said in a telephone interview.

Oppmann and his friends spent the better part of the last 25 years splitting their time between the Cactus League and the Grapefruit League. But for the last three years, their spring-training time has consisted of one weekend in March in the Valley.

“(We) really like the setup of the Cactus League,” Oppmann explained. “We can pick one spot in Phoenix and dial up a lot of options. When we’re in the Grapefruit League we have to pick a town and try to do as many of the games (as possible) and then make a decision on how far we’re willing to travel for others.”

Their only potential problem in the Valley might be getting tickets for a Cubs game — home or away.