PHOENIX — The Valley is a symbol for the changing face of hockey. One of the Coyotes’ top young players is of Haitian descent. The head of the team’s instructional school is female. And the No. 1 pick in the 2016 NHL draft, Scottsdale’s Auston Matthews, has a mother from Mexico.

“There’s a slogan: ‘If you can play, you can play,’” said Coyotes winger Anthony Duclair, whose parents were born in Haiti. “So it doesn’t matter where you’re from or who you are or what you believe in.”

The sport has long had a reputation of lacking diversity, but the NHL has made strides toward changing that narrative in recent years, and it will continue to be a focus, league executives said.

The first U.S.-born African-American, Val James, didn’t play for the league until 1982, 65 years after its inception. The numbers increased each decade, according to the NHL, and 32 took the ice during the 2016-17 regular season.

The first Asian player, Larry Kwong, came aboard in 1941, and the first Hispanic, Scott Gomez, in 1999. Growth among those nationalities has been slower but steady.

Luring more diverse fans is a priority for the NHL. In 2014, the Stanley Cup Finals were viewed by just 632,000 minorities compared to 10.5 million for the NBA Finals, according to a study by Sports Media Watch.

The Coyotes hosted a “Hockey Is For Everyone Night” in February before a game against the Buffalo Sabres. The celebration included a street hockey clinic for children outside Gila River Arena.

Willie O’Ree, a Canadian who became the first African-American to play in the NHL, hosted the clinic and dropped the ceremonial first puck. 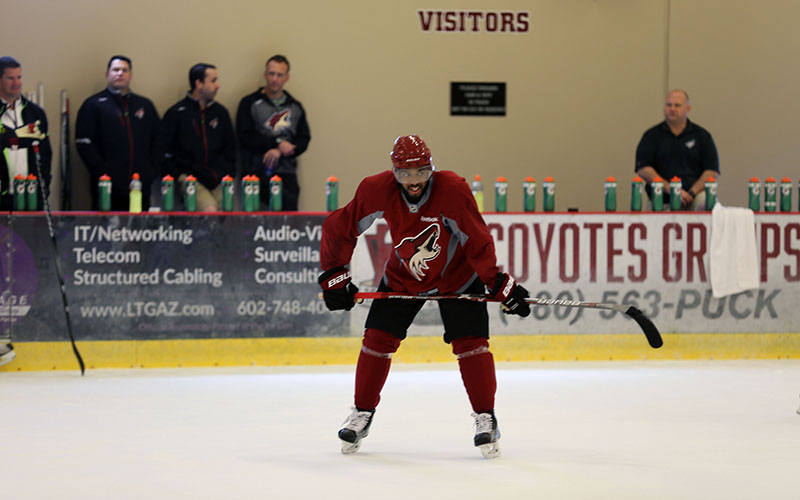 He also is an ambassador for the NHL’s Hockey Is For Everyone (HIFE), an organization started 19 years ago to help the sport become a more multicultural league. The quest is not just to increase diversity on the ice, but to bring in more fans with varied backgrounds and to introduce young minorities to the game.

The league supports about 30 volunteer programs in inner-city communities aimed at increasing the participation of minorities across the United States and Canada, according to NHL.com.

O’Ree, who debuted for the Boston Bruins in 1958, is also the director of cause marketing for the NHL.

After the “Hockey is for Everyone” event at Gila River Arena, many Coyotes fans stayed to watch a private screening on the arena videoboard of “Soul on Ice: Past, Present and Future,” written and directed by Damon Kwame Mason. The film highlights untold stories and contributions of black athletes in ice hockey.

“To me (the film) just gives a new perspective of hockey,” Mason said.

“If you’ve never followed the game of hockey or you might’ve just seen it on TV and just kind of notice that it was a game that not many black athletes play, you might have the mindset thinking that blacks just don’t play the game of hockey.

Previous versions of this story incorrectly stated the year the first African-American played in the NHL. Canadian Willie O’Ree broke the hockey color barrier in 1958, while Val James became the first U.S.-born African-American to join the league, in 1982. The story here has been corrected.

“I think what the film does, it gives you a whole new perspective to see the history of black athletes in hockey and it gives you education. It’s entertaining and it’s a motivational tool as well to get people motivated into participating in the game or to staying in the game.”

The Coyotes’ outreach goal is to expose the sport to people from a wide variety of backgrounds. The organization has clinics, youth programs and partnerships with the Boys and Girls Clubs of Metropolitan Phoenix.

The “Learn to Play” program introduces hockey to children ages 4 to 8.

“You look at guys that have been in the league for a while like P.K. Subban, (Wayne) Simmonds, the younger generations look up to those guys,” Duclair said of African-American players in the league. “You just want to be out there in the community, wherever it is, to help charity out or for the less fortunate to get hockey started.”

Gender diversity is important to the NHL, too.

Lyndsey Fry, who grew up in Chandler and played in the 2014 Winter Olympics for the United States, is head instructor for the Coyotes Hockey School Clinics. She also runs “Small Frys,” a girls-only Learn to Play youth hockey program.

“I think it’s really going to be important these next couple years to focus on getting the girls’ side growing as quickly as the boys’ side,” Fry said. “That’s sort of where I tie into the whole thing.”

Opening the door to a wide variety of backgrounds also means addressing the issue of finances. The cost for a new set of hockey equipment alone can range from $300 to $700 according to newtohockey.com. This does not include the fees to put someone in a hockey league or program. 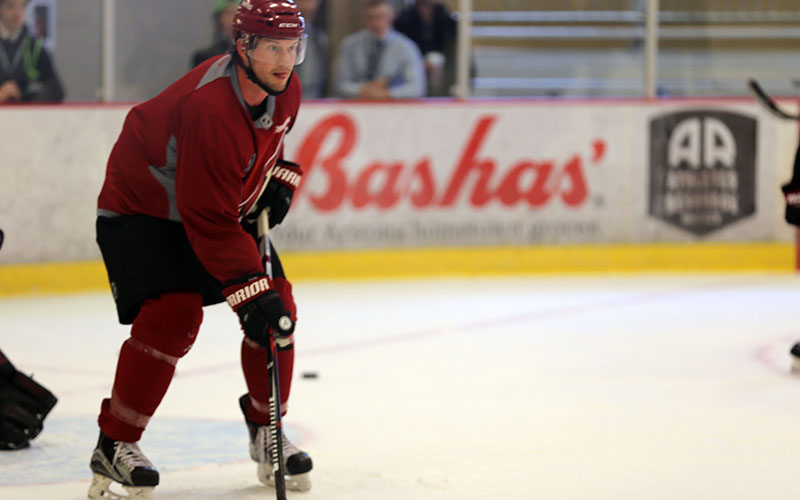 The cost to play ice hockey for Team Arizona in high school in 2016 was $1,500 per player and $90 to try out for the team, according to the Arizona High School Hockey Association (AHSHA) website.

Marc Fritsche, president of the AHSHA, understands it is difficult to reconcile the goal of expanding hockey in the state with the sport being so expensive.

“Cost is the biggest deterrent we have in the game of hockey,” Fritsche said. “And (there are) programs that the NHL teams have available for us for equipment, for helping kids get involved in a program, but that’s short-lived. It’s not enough.”

Fritsche said it will take more philanthropic efforts from current and former players to help families that don’t have the resources to play hockey.

Travel team hockey, for example, can be expensive.

Opportunity can make a difference. Brothers Chris and Anthony Stewart, who grew up poor in Toronto and whose father is a Jamaican immigrant, were helped by friends who gave them rides, bought them necessities and let them stay at their homes. Both were drafted by the NHL and Chris is still in the league, with Minnesota.

“Where there’s a will, there’s a way,” Mason said. “There’s always been situations where kids who have come from families that weren’t financially well off have (persevered) and made it to the National Hockey League like Chris and Anthony Stewart.

“They didn’t come from a lot of money and they were able to make it into the NHL. The same with Wayne Simmonds. So it’s just about the dedication, it’s about how much you want it and how much you want to sacrifice for your children.”

Duclair didn’t have the easiest time on his journey to the Coyotes, either.

“I had the help and support of my family and friends and it was a little tough on me,” Duclair said. “We grew up in Montreal and we weren’t the wealthiest family but at the same time my parents worked day and night just to put me in sports and I can’t thank them enough. Without them I wouldn’t be here.”

Street hockey is less expensive and more recreational. The sport is one kids can go outside and play with minimal expense.

“That’s kind of a forgotten avenue, but totally a legitimate way to get out there and play,” Fry said.

Street hockey is also a way to catch the eye of a child who may not be interested in ice hockey right away.

The Coyotes unveiled a new Dek (a form of street hockey) hockey rink at Luke Air Force Base in Glendale recently.

“It’s such an easy way for kids to get involved in the game, an inexpensive way for them to get involved in the game and just go out and have fun,” Fry said. “If you’re a little kid or a parent and you see kids playing in the cul de sac at the end of your street, that’s a great way for them to see like, ‘Wow, that looks like a lot of fun. How do I get involved, how do I get my kids involved?’ So I think the visibility aspect of it is really important, too.”

The Coyotes and NHL will continue to work to bring diversity to the sport.

“I think that for a lot of people, hockey is seen as this white, (homogenous) sport,” Fry said. “I think that it’s going to continue to take teams like the Coyotes and teams across the country to be vocal about it and really put it out there in front of people that this is not the case, this isn’t the way it needs to be.”