In May 2016, Mother’s Grace provided seed money to the International Rescue Committee in Phoenix to start Child Watch, a program that provides a safe space for mothers to bring their children while they learn English and how to adjust to living in a new country. (Photo by Mindy Riesenberg/Cronkite News)

Three weeks in, they had to rush her son to the hospital. Once there, doctors diagnosed him as diabetic.

Moore-Fanger couldn’t visit him because she was too sick from the chemo.

“I realized there’s so many people working in our community with these tragedies,” she said. “The moms are the backbone of these families.”

She knew she had to do something more for mothers like her who couldn’t worry about life’s day-to-day details when it felt like everything was falling apart. She had taken her family to New Orleans to help with Katrina relief, had donated money to the AIDS epidemic in Africa, but after her diagnosis, she knew she needed to do something of her own. She filed for a 501(c)(3) and grew her nonprofit Mother’s Grace.

The Paradise Valley-based group’s mission is to help mothers and families in need. “We help pay for mortgages, utility bills and just help them get back on their feet after a tragedy,” Moore-Fanger said.

The organization raises funds from private donors and sponsorships and gives out four grants a year totaling more than $250,000 to either individuals in need or businesses with similar missions.

According to WalletHub.com, Arizona is sixth worst state in the nation for working moms when calculating things such as day care availability, child care costs, gender pay gaps and female to male executive ratios. 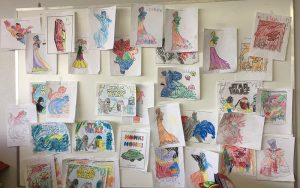 Phoenix has refugees from Somalia, Syria, Iraq and Afghanistan, and the committee interacts with them in a variety of ways, from greeting refugees at the airport to finding their first apartment and teaching them English, along with information about the culture and their rights and responsibilities.

In May 2016, Mother’s Grace provided seed money to start Child Watch. Nicky Walker, development manager at IRC Phoenix, said they noticed that when they held meetings for the refugees, mostly men attended, and they started to wonder where the mothers were. The women were at home with the children.

Child Watch allowed the committee to create a safe space for mothers to bring their children while they learn English and how to adjust to living in a new country.

“What’s been able to come out of this is an actual child watch program. We have a former refugee herself who teaches kids to count, how to stand in line, say ‘please and thank you,’ and basic English,” Walker said.

She said that since Child Watch has opened, mothers come to more meetings, show more focus and learn more. Walker mentioned that as political times and views on refugees become more volatile, it is crucial to have programs such as Mother’s Grace to help with donations and funding.

“(Mother’s Grace) helps a population that is really underserved and sees that we’re all human and see the struggles mothers’ have that are from Syria that are similar in some ways to mothers from America. This impact is incredible,” Walker said.

While Mother’s Grace helps organizations that have similar missions, it also lends a hand to other nonprofits in Arizona. 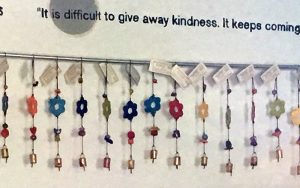 Nonprofit Ben’s Bells received a grant from Mother’s Grace so it could open a Phoenix storefront. (Photo by Amanda Luberto/Cronkite News)

Jeannette Maré’s youngest son died at 3 years old and in a period of intense grief, she started making bells with clay beads as a coping mechanism. On the first anniversary of her son’s death in 2003, volunteers placed the bells around Tucson with a note encouraging whoever finds it to take the bell home with them and remember to share kindness each day. Volunteers placed hundreds of bells that day, and people started reaching out to Maré with their stories of grief and hope.

Today, Ben’s Bells is a Tucson staple with their bells and their popular “Be Kind” mosaics around town.

They had been hosting events in the Phoenix area in 2012, but after receiving a grant from Mother’s Grace in 2015, they opened a storefront on Roosevelt Row in downtown Phoenix. This has allowed them to spread their kindness across the state, Ben’s Bells spokeswoman Amy Collinsworth said.

Moore-Fanger said that being a nonprofit has its downsides, like not being able to keep and pay an administrative board. But they chose to do this so that all money can go to the moms.