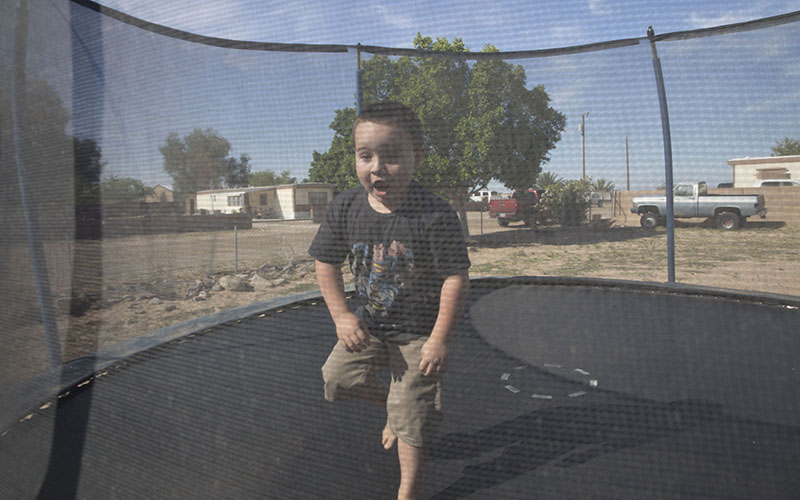 four-year-old Gavin Cunningham plays on a trampoline in his family’s backyard. (Photo by Ben Flores/Cronkite News)

Elizabeth Gullikson and her family of six live outside of Yuma, a town of 93,000 people. The youngest of the six is a four-year-old boy named Gavin Cunningham, who has autism.

Autism is a condition that often requires specialized treatment like occupational, speech, behavioral and sensory therapy. In small towns, those resources can be hard to find, and some families have to make do with what they have.

“In Yuma, the resources, I call them hidden resources, because you really have to search out and seek help,” Elizabeth said.

Brandon Billings, 14, talks to Gavin while he sits on the couch watching cartoons. (Photo by Ben Flores/Cronkite News)

Elizabeth tried to take Gavin to the Western Arizona Council of Governments (WACOG) Head Start program nearby. While the program has served other kids with special needs, Elizabeth says the program didn’t meet Gavin’s specific needs.

She also tried putting Gavin into speech classes at one of the school districts, but he was considered too skilled to be in the preschool classes. Jason hopes Gavin can get into a similar program in the future.

“I’ve noticed a little regression since we had to pull him out, with his enunciations and things like that,” Jason said. “But if we can get him into School District One with the early kindergarten, I think (it would be good). They were awesome over there.”

The main resource Elizabeth has right now is respite care. The respite care provider, Rosey, has done wonders in helping Elizabeth and her family care for Gavin. Rosey takes Gavin on Tuesdays and Fridays, giving Elizabeth and Jason several hours a week to get caught up on housework and other errands.

“On Tuesdays (the respite care provider) takes him to his group skills to teach him how to socialize,” Elizabeth said. “On Fridays, she picks him up and basically gives us a break, as well as giving Gavin a break from us, and it also gets him out in the community and really teaches him in a structured environment how to be out in the community, at a store or a park, and to behave appropriately” 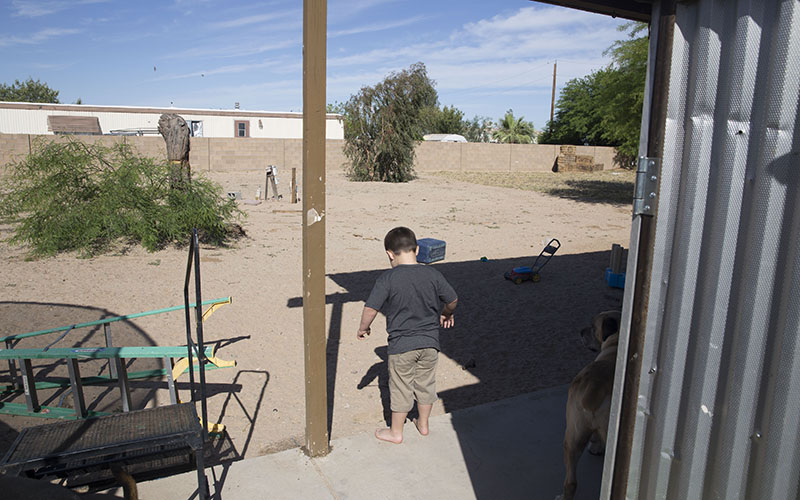 The family dog, King, looks after Gavin as he plays in the backyard. (Photo by Ben Flores/Cronkite News)

Gavin’s needs can put a strain on the family’s finance and on the lives of his siblings.

With all of that, Jason admits it can sometimes be a lot to handle.

“It’s a handful trying to watch him, help with homework, get the nine-year-old out to his friend’s house, have (Brandon) going to do anything in the garage, while (Elizabeth) is trying to cook in the meantime,” Jason said. “It is a tough situation. We do what we can.”