City officials have made bringing a grocery store to the downtown area a priority for years. Experts predict downtown’s population growth will continue as developers build more housing, making such a store more viable.

The Fry’s Food and Drug store will provide fresh produce and food items to an area of the city largely classified as a “food desert” by the U.S. States Department of Agriculture.

Food deserts are areas that lack fresh fruit, vegetables and other healthy food items, largely because of a lack of grocery stores, farmers markets and healthy food providers, according to the USDA. 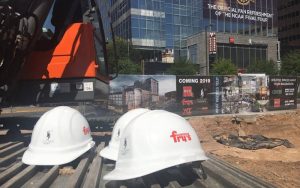 The Fry’s Food Store project is set to be completed in 2019. (Photo by Alyssa Hesketh/Cronkite News)

“I know there are a lot of people that live in the area that do not have access to fresh vegetables,” said Kyle Laws, who works at Kaleidoscope Juice across the street from the construction site on First and Washington streets.

The closest chain grocery store is Safeway, which is more than a mile away.

“I lived in downtown Chicago for eight years, and it was a royal pain until they opened a legitimate grocery store,” said Stephen Bero, a resident of San Diego who is moving to the Phoenix metropolitan area. “Otherwise, you get small specialty shops that, while they are nice, do not hit all of the different options that I need.”

“In a lot of cities, there is that disconnect, and I do not know why,” he added.

Joe Juarez, who works at V’s Barbershop at Phoenix CityScape, said a new grocery store will bring “a lot of opportunity for students, lawyers and workers” in downtown Phoenix.

The city will provide $18.3 million in incentives for the mixed-use project by RED Development. The development also includes 200,000 square feet of retail and office space, restaurants, parking and more than 300 high-rise apartments.

“For too long, (the site) has been a parking lot, and that is all about to change,” Stanton said. “This project is going to be a game changer for our city, for our downtown.”

Stanton said the 55,000-square-foot store will provide more jobs and commerce to the city and its growing economy.

“It is a testament to our progress, our maturity as a city and as a downtown,” Stanton said. “People have been asking for this for a long period of time.”