The Department of Veterans Affairs new Access to Care website is supposed to make it easier for veterans to check on the quality of care and the wait for service at their VA facility and then compare those to other hospitals. (Photo by Chad Garland/Cronkite News) 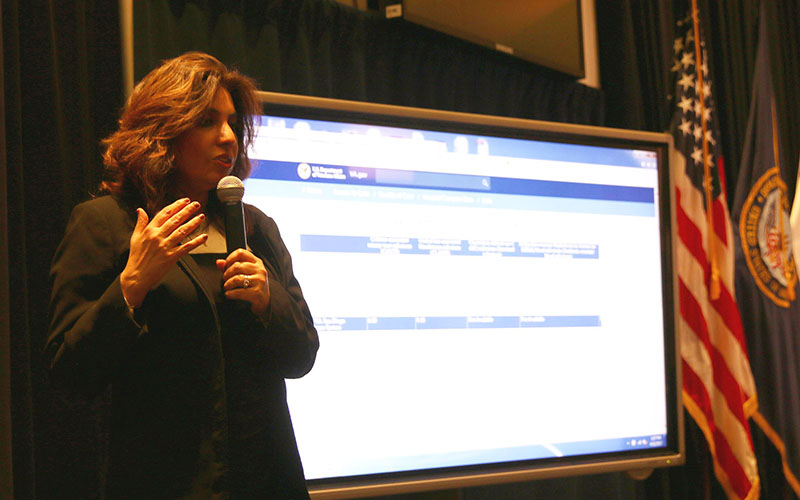 Dr. Poonam Alaigh, acting Department of Veterans Affairs undersecretary for health, at the unveiling of the agency’s new Access to Care website, which she called an unprecedented move to improve agency transparency. (Photo by Joseph Guzman/Cronkite News)

WASHINGTON – Veterans advocates said they were cautiously optimistic Wednesday about a new Department of Veteran Affairs website that aims to provide veterans better information on wait times and quality of care at the agency’s hospitals.

VA officials said at the launch of their Access to Care site Wednesday that it is an “unprecedented” move to increase transparency and accountability at the agency.

“One word to describe what we have done here is, transformative,” said Dr. Poonam Alaigh, acting VA undersecretary for health. “There is no other health care system that has done what we are about to do.”

The site will allow veterans to compare access and quality measures of their VA facility to other agency sites and private health care facilities so they can make better-informed choices about where and when to get health care.

The website aims to improve transparency at an agency that was embroiled in controversy for its handling of patient records and wait-time data.

The Phoenix system came under fire in 2014 after it was revealed that workers there had tampered with data to make it appear that veterans were getting treatment sooner than they actually received it. That led to the discovery of problems at facilities across the nation and forced the retirement of the VA secretary at the time, among other changes.

Reaction to the new online tool among veteran advocates Wednesday ranged from welcoming to wait and see.

“It’s not the first time the VA has rolled something out and said that it was going to change the game in terms of accountability and transparency,” said Rory Riley-Topping, former subcommittee staff director for the House Veterans’ Affairs Committee.

“I think everybody’s rooting for them to actually do that, but if you look at the Choice Act, there was a lot of optimism there and that roll-out proved problematic,” she said.

Congress passed the Choice Act in response to the 2014 controversy. It was supposed to address long wait times for veterans by letting them go to physicians outside the VA system, but critics said it has done little to help the situation.

Riley-Topping said one potential flaw is that the new tool uses data from the VA, which has not had a good record of maintaining its own data in the past.

“I would hope that part of the conversation that the VA is having is how to make sure they are capturing the right and accurate data for this website, not just relying on methods they have used in the past,” Riley-Topping said.

The site unveiled Wednesday is not fully functional – VA officials said they are still loading data on to the site, but expect it to be complete by May 1.

But Riley-Topping said she thought a partial roll-out was the right thing to do, to let vets know that they agency is working on the site.

She also questioned how well older generations of veterans would handle a health care tool that is entirely online, noting that they may not be as tech-savvy as younger generations.

Some veterans groups in Arizona, however, said they were glad to see the VA taking action.

“On behalf of the VFW, anything that the VA can do that is going to help the vets better understand what the process is and how to make it better, we’re 100 percent behind it,” said Ken Marshall, senior vice commander of the Veterans of Foreign Wars for Arizona.

Marshall said the website is something that the VA has needed to do for a long time. Before this, he said, people could not find out what was going on at VA hospitals the same way they can look at data from the health department on other hospitals in their area.

“That’s the thing about transparency,” Marshall said. “You can talk about it and promise it, but putting yourself out there online and making it available for everyone to use is a whole other story. That’s being pretty transparent.”