Baggage handling is one of the four areas looked at in the airline quality report, which said that incidents of mishandled baggage fell from 3.24 per 1,000 passengers in 2015 to 2.70 in 2016, one of several service improvements. (Photo by Bonnie Henderson/Creative Commons) 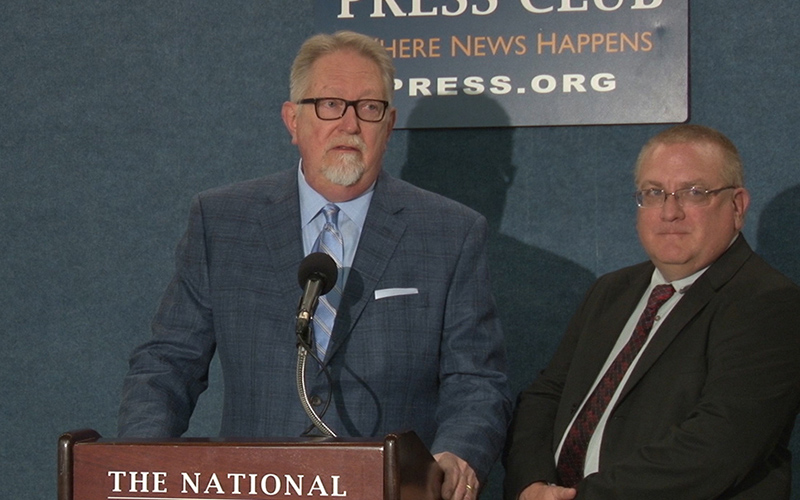 Wichita State University professor Dean Headley, left, and Brent Bowen, dean of the College of Aviation at Embry-Riddle Aeronautical University, said airline performance is the best it’s been in the 27 years they have been studying it. (Photo by Tyler Fingert/Cronkite News)

WASHINGTON – Airlines performed better last year than they had for almost the last three decades, according to an annual report on airline quality released Monday.

The report’s authors said Monday that the scores for the industry were the highest they have seen in 27 years of doing the study.

“The airlines as a whole have done better in the four major categories and because they’re doing slightly better it has taken the score up to its highest position over time,” said Brent Bowen, dean of the College of Aviation at Embry-Riddle Aeronautical University.

“Everyone wants to get there on time and they want to get there with their bag,” Bowen said. “It’s good news for travelers because you have the potential to have a more satisfying flight.”

Alaska Airlines and Delta Airlines finished first and second, respectively, in the rankings, while Virgin America slipped to third after holding the No. 1 spot for four years.

Meanwhile, the two biggest carriers at Phoenix Sky Harbor International Airport, American Airlines and Southwest Airlines, did not perform as well among the 12 carriers studied.

“In November, we posted our best operating month since the merger with US Airways, and that performance has continued in to 2017, clear evidence we are getting better every day, and are on the right trajectory,” said American Airlines spokesman Ross Feinstein in an emailed statement Monday.

“Customer service will be an area of improvement in 2017, as we have launched a new training program for our front-line team members,” his statement said.

Bowen said the study looks at “a broad category of airline performance that is important” to passengers.

While customer service complaints overall decreased slightly last year, there have been better years, said Dean Headley, a marketing professor at Wichita State University and co-author of the report, who added that there is much area for improvement.

“Bags and bumpings are the best they have ever been, then we look at customer complaints and that’s not the case there,” Headley said.

“It is certainly not the best or worst it has ever been but at least it is going in the right direction.”