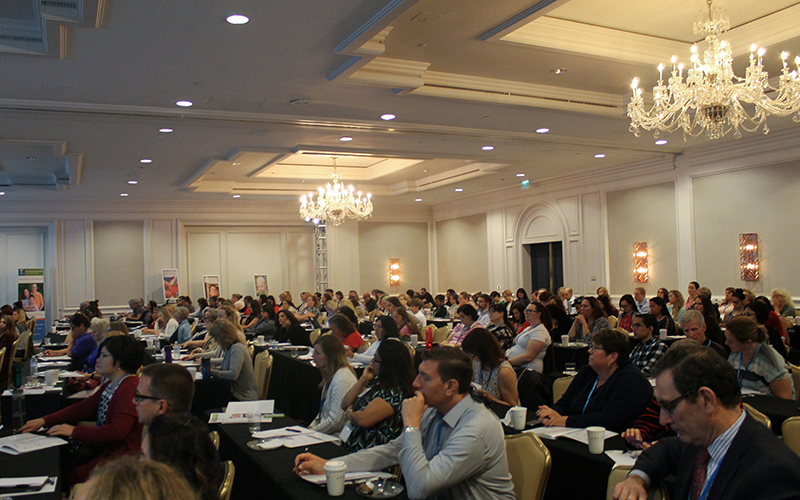 Health-care professionals and others listened to doctors speak issues such as how a proposed replacement for Obamacare could affect finances for families with children who are disabled. The Arizona Symposium on Children With Special Health Care Needs was held at a Phoenix hotel. (Photo by Graham Bosch/Cronkite News)

About 663,000 children receive health insurance coverage through Medicaid in Arizona, making up 51.5 percent of the state’s Medicaid population, according to the American Academy of Pediatrics. Pope is a board member of the Arizona chapter.

“The families provide a lot of the care and coordination for these children who have these special needs,” Pope said at a symposium Friday at a Phoenix hotel aimed at health-care professionals and parents of children with disabilities.

Doctors speaking at the event were responding to a failed attempt by Republican lawmakers in Washington to repeal and replace the Affordable Care Act, also known as Obamacare, with the American Health Care Act.

The Republican-backed Health Care Act would have reduced federal deficits by $337 billion over the next decade but would have left an estimated 24 million Americans uninsured, according to a cost estimate from the nonpartisan Congressional Budget Office.

Pope, one of several speakers at last week’s symposium who objected to the proposed Obamacare replacement, said Medicaid can ease a financial burden for parents who devote many hours to caring for their children. Parents often cannot work as much as they need to in order to remain financially stable and end up having unmet medical and equipment needs as a result, Pope said.

Arizona Medicaid expansions under Obamacare include the Arizona Long Term Care System, a program that provides fixed-income seniors and disabled people with health care assistance. The GOP plan would have reduced federal funding for state Medicaid programs starting in 2020, according to The New York Times.

The GOP health-care plan, which was opposed by the Arizona Hospital and Health Care Association, died last month in Congress when it was apparent there weren’t enough votes to pass it. But Republican lawmakers in Arizona and elsewhere in the country hold firm that Obamacare is failing and needs to be replaced. Moves continue in Washington to revive a health-care bill that will pass Congressional muster.

Sen. Jeff Flake, R-Arizona, is among lawmakers opposed to Obamacare in favor of a “free-market approach that will lower costs, encourage innovation, and empower individuals to make their own health care decisions,” according to the senator’s website.

Sen. John McCain, R-Arizona, also objects to Obamacare, calling it a “fatally flawed health care law” with “skyrocketing premiums” that must be repealed and replaced, according to his website.

Backers of the bill said it would have taken away tax penalties for people without health insurance, reduced subsidies for buying private insurance and put a federal spending limit on Medicaid, which is jointly funded by states and the federal government, according to The New York Times.

The proposed system would change how Medicaid, which comes through AHCCCS and the Arizona Children’s Health Insurance Program, are funded, shifting the cost to the state government, Pope said. The cuts would “effectively halt” Medicaid expansions in Arizona, including the Long Term Care System, according to the Arizona Capitol Times.

Many children would have inadequate coverage or lose coverage completely, Pope said.

Guysi’s husband, Brett, receives private health insurance through his job but it only covers a certain number of therapies, and Brooke’s needs can easily exceed that, Guysi said in an interview.

“That, on top of all the specialists that she sees, evaluations and testings and medical procedures, and we are a family of four on one income, so when Medicaid comes along and picks up the tab for her when our primary doesn’t, it’s huge for us,” Guysi said. “Any parent wants to do what’s best for their child, and Medicaid allows us to do that.”

Guysi said Medicaid and the extensions under Obamacare are the only reason her family was able to get the care they needed without going bankrupt.

“When we did receive a diagnosis, and you’re told, ‘these are the challenges your child faces, and these are the things that will help them overcome those challenges,’ when you can’t financially afford those, it’s devastating,” Guysi said.

Health care is complicated and can be difficult to understand for people that aren’t familiar with it or don’t speak English, said Cathy Humphrey. Her 12-year-old daughter, Maria, has hydrocephalus and cerebral palsy, a movement disorder that weakens muscle tone and posture.

Humphrey said she feels the family gets support to meet Maria’s needs, but that might not always be the case.

“If things change, like if that AHCA comes in or something like it, I think it’s going to change a lot for the worse for us,” Humphrey said in an interview. “I really feel like it’s going to be bad. But now, with the way things are going now, I think we’re doing pretty well in giving her what she needs to live a good life.” 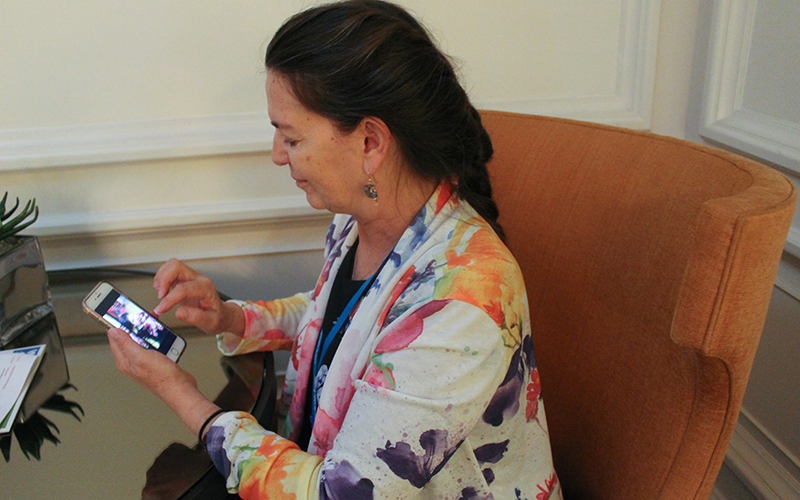 Cathy Humphrey scrolls through photos of her 12-year-old daughter, Maria, who has hydrocephalus and cerebral palsy. Humphrey said Medicaid and other government help eases the financial burden of health care. (Photo by Graham Bosch/Cronkite News)

Coverage under Medicaid can help families avoid falling into poverty, said Dr. Karen Remley, chief executive officer and executive vice president of the American Academy of Pediatrics. Obamacare includes a stipulation that a patient can’t be denied coverage due to pre-existing conditions, which is “huge” for families of disabled kids, Remley said.