The proposed tank would be built on a corner lot near State Route 179 and West Mallard Drive in Mystic Hills, a community of high-end homes.

Supporters of the tank say it’s needed to increase the city’s water storage and create another source of water for area firefighters. People opposed to the tank say it doesn’t belong in a residential neighborhood and are concerned it could lead to decreased property values.

The rocky proposal: underground tank to blend-in to neighborhood

Plans for the tank are in limbo, awaiting a city planning and zoning decision, after some residents expressed their opposition to the tank at a public meeting in early March. 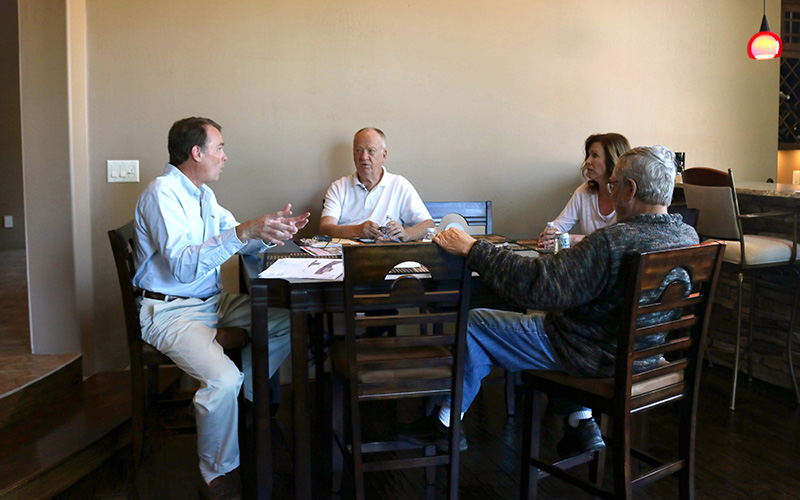 Neighbors in the Mystic Hills development in Sedona oppose a water tank in the area. Kevin Brackin, left, and his wife, Desiree Brackin, who own a home closest to the proposed contruction site, and homeowner Bruce Huelat, in the middle, share similar concerns. “We are not anti-Arizona water… we just want something we can all live with,” Huelet said. (Photo by Jessica Clark/ Cronkite News)

“We really want to be a good neighbor,” said Keith Self, the manager for the Verde Valley division of Arizona Water Company. The company serves 16 districts across Arizona, providing water utilities to more than 250,000 Arizona residents, according to the company website.

“We don’t want to be the big bad utility that’s trying to shove something down someone’s throat but we do understand the needs of the distribution system probably better than they do,” Self said in an interview last week.

Self said the tank would be built mostly underground with operations facilities, including a booster pump station, hydro tank, chlorine room and electrical room, on top of the reservoir. The booster pump station would allow water to flow out at 3,000 gallons per minute.

The above-ground facilities would be designed in a similar style to neighboring homes, making the reservoir virtually invisible to passersby, Self said.

The struggle to satisfy: stymied paths to resident support

Self said many neighbors were opposed to the proposal at the mid-March meeting, saying many expressed concerns about construction noise and land valuation.

“Most of the concerns were more based on emotion, I think, than fact,” Self said. “They just do not want a water tank in their residential neighborhoods.”

Environmental groups and other community members opposed that move, leading the company to draft a new plan to build the tank inside the city.

“We think this a really good proposal and we’re hoping that we can talk more with these people and maybe change their minds,” Self said.

Some neighbors may not be easily persuaded. 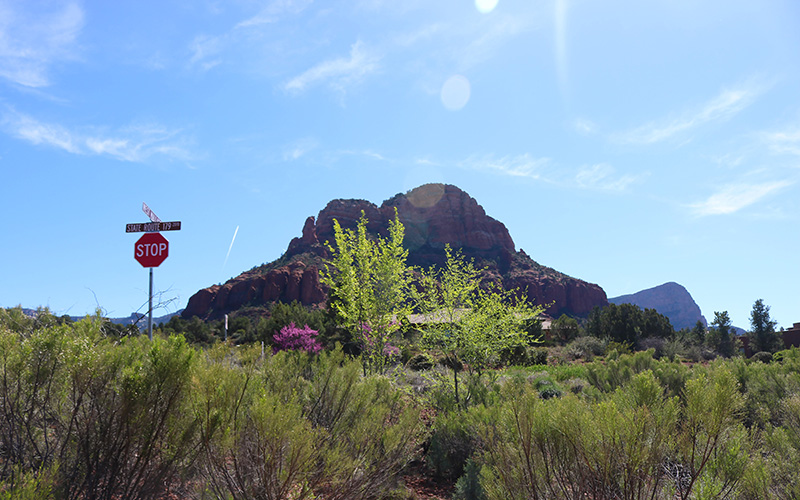 Elephant Rock is one of many views for Mystic Hills residents in Sedona. (Photo by Jessica Clark/ Cronkite News)

Kevin Brackin, whose home has a clear view of Elephant Rock and is steps away from the proposed water-tank, is opposed to the project.

Brackin said he was not concerned when he received a hand-delivered letter by the company notifying residents it bought the property and intended to build a tank there.

After researching it more, Brackin began to question the plan. 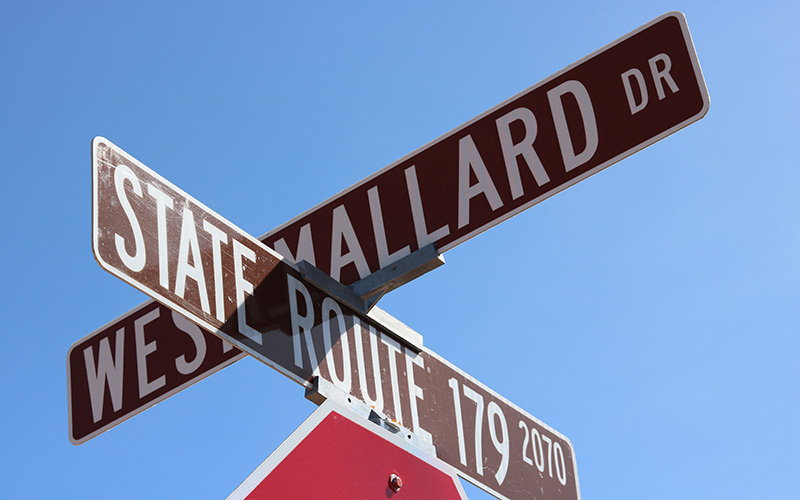 “The issue isn’t that we don’t want it in our backyard,” Brackin said. “The issue is, where does it make the most sense to do it without the disruption, property value issues, drainage.”

Brackin said he doubts the company can guarantee its construction estimate of six to nine months and does not want to deal with the noise as the land is excavated and drilled.

He also questioned whether the city needs another a water tank that would double the city’s supply.

“We can’t get answers,” Huelat said. He said the company should have reached out to residents in 2012 when it first bought the property.

Huelat said the project could cause more flooding on the street. His house and several other houses on the block have experienced extensive flooding during the Arizona monsoon, according to Huelat. Clearing the land would remove any natural barriers to flooding, making it even worse, Huelat said.

“We are not anti-Arizona water. We are not anti ‘a’ tank. We’re anti- a 1.5 million gallon tank,” Huelat said. “We just want something we can all live with.” 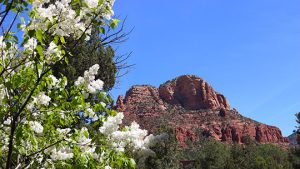 Mystic Hills resident Kevin Brackin can see Elephant Rock in Sedona from his backyard. He is opposed to a local water company’s plan to place a 1.5 -million-gallon water tank and facility steps from his home. (Photo by Jessica Clark/Cronkite News)

Brackin and Huelat have been sending letters to the city planning and zoning commission and speaking with city officials.

“Because we don’t see a lot of new construction, it’ll get some notice for sure,” Christensen said, adding that because Sedona is land-locked, most land has already been developed. He said homes sell for an average of $460,000 to $480,000. Homes are valued as high as $4 million, he said.

But Christensen added any noise in Mystic Hills would be temporary.

“When it’s done, it’s done, and then you get the benefits of the project,” he said.

Christensen said he doesn’t expect drop in property values in the neighborhood if the above-ground facilities blend into the community landscape as proposed. 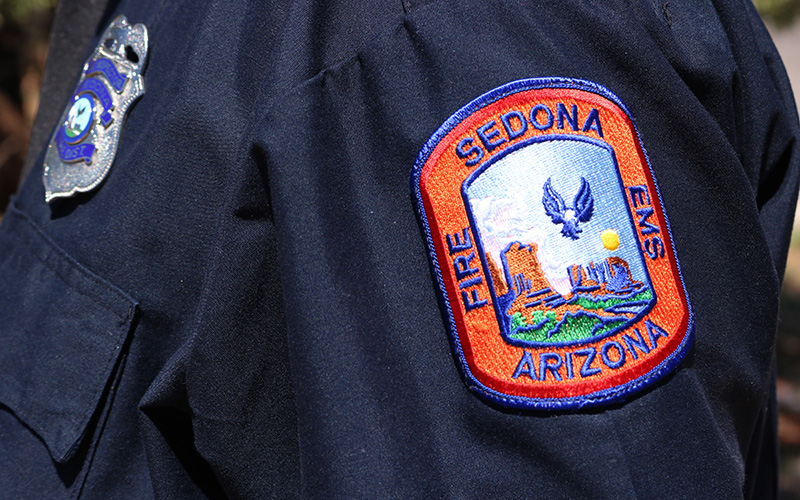 Rick Evans, a fire inspector for the Sedona Fire District, said it can take 500 to 1,000 gallons-per-minute to get a small house fire under control. Evans said the city is growing and needs another water source to better fight fires. (Photo by Jessica Clark/ Cronkite News)

The tank would double the current supply of water storage in Sedona, according to Rick Evans, a fire inspector for the Sedona Fire District.

“There’s been a lot of growth in the area and with that growth we see a constant strain on the system,” Evans said.

An estimated 10,000 people live in Sedona, with its population ticking upward by about 300 people since 2010, according to U.S. Census Bureau data from 2015.

Fighting a structure fire for a small house takes 500 to 1,000 gallons-per-minute to contain, he said.

Fire hydrants in the area can currently supply this volume of water. But, the ability to deliver 2,500 to 2,000 more gallons-per- minute than current hydrants supply would strengthen the city’s firefighting resources, Evans said. The fire department handles about one fire a week.

Self said the Arizona Water Company will review the public’s comments and “try to come up with answers to all their questions” while awaiting a city planning and zoning commission’s decision.