Holly Singh, senior director of the International Students and Scholars Center, says ASU is allaying the fears of international students wanting to come study here by telling them “we have a diverse team.” (Photo by Charlie Leight courtesy of ASU Now)

PHOENIX – As graduation looms and student applications are being submitted for the summer and fall semesters, Arizona State University officials are providing support to the international student community over President Trump’s second executive order calling for a travel ban from six Muslim-majority nations.

Holly Singh, senior director of ASU’s International Students and Scholars Center, is in India until next week meeting with students who have applied to or have been accepted at ASU, but are leery about studying in the U.S.

Concerns are particularly high, Singh said, after a man in February shot two Indian software engineers, killing one, in a Kansas bar after reportedly yelling “Get out of my country!”

“Not only have we been hearing here, we’ve also been hearing in India that the students don’t want to come because of what they’re hearing,” Singh said. “The political rhetoric, but also what they perceive to be us not welcoming them. We want to talk to them and say ‘we have a diverse team; we are still the same as we were a semester back.'”

ASU President Michael Crow issued a university-wide statement to all students days after the ban was originally announced in late January.

In the statement, Crow described Trump’s executive order as “an ill-conceived and poorly executed public policy” before assuring international students that ASU does not support the ban, and it would work to communicate and support the students.

“ASU is very accommodating, and is very conscious of the diversity of our campus,” said Abdullahi Gallab, an ASU religious studies professor and a Muslim of Sudanese nationality. “It was a smart idea that (Crow) came with an official statement about (the ban). I think that sent a message to every single Muslim student.”

A forum held recently on the Tempe campus kicked off an initiative by ASU to provide support for international students that are or potentially could be, affected by Trump’s travel ban. 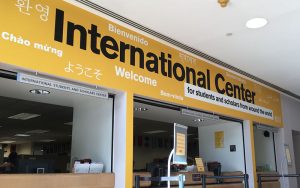 The ASU International Student and Scholars Center houses the department on the southeast corner of campus. ASU is the top public university chosen by international students according to the Institute of International Education. (Photo by Diego Mendoza-Moyers/Cronkite News)

The forum offered advice for ASU faculty and staff to pass on to international students. A website was also created to list government resources and immigration information as part of the Supporting Our International Students forum.

Trump’s second travel ban – which was set to take effect on March 16 before courts in Maryland and Hawaii temporarily blocked sections of it – is “more carefully written,” according to immigration attorney Chris Brelje, who spoke to several hundred faculty members at the forum.

“The second executive order … includes specific scope language, specific exclusions to make it very clear (which) people are not included,” Brelje said. “And that’s the way it should be if you’re going to have this sort of thing; if it’s found constitutional. It’s all laid out so at least you know, ‘are you included or not?’ Is your mother-in-law included who doesn’t have a visa yet and wants to visit from Syria? Is she going to be barred or not?”

The forum, with the help of the Arizona Legal Center, presented information on different visas or documentation students can obtain to legally remain in the U.S. It also covered the specific groups targeted – and not targeted – by the ban. Brelje said the travel ban could potentially be extended for longer periods of time, or to different countries.

The added clarity has still caused anxiety among ASU students. According to Singh, there are about 180 students who are from the six countries listed in Trump’s second, revised travel ban. The countries affected are Libya, Somalia, Sudan, Iran, Syria, and Yemen.

A report by the American Association of Collegiate Registrars and Admissions Officers published last month shows that applications to study in the U.S. from students in places such as China, India, and the Middle East are down this year at nearly 40 percent of schools that took part in the survey.

The report shows that “international student recruitment professionals report great deals of concern from students and families all over the globe,” with the “highest number of concerns” coming from the Middle East, according to the report.

“I think it could have a chilling effect. I’ve talked to some students since the first ban, and more than one asked me how to get to Canada,” Brelje said. “‘What’s the Canadian system? Can I go and do my graduate work there?’ I thought it was sad that we’ve got some really bright students here who now are thinking ‘would I be better off in Canada?'”

Singh tells students from the six majority-Muslim nations named in the ban to contact his office before making international travel plans. He said that he does not want to stop students from traveling, but “we do want to advise them what situation is good for travel.”

Although she obtained a visa to study in the U.S., ASU freshman Naruro Hassan of Somalia said she has since been granted temporary legal residence.

Hassan said her father has been living in Ethiopia in preparation of joining Hassan and her mother and siblings in the U.S. this summer. He had applied for a visa and had the move planned out – until the travel ban was announced, Hassan said.

“We were waiting for him and the visa and everything,” Hassan said. “We had prepared the money and everything for him to come, and the visa was rejected. It says ‘don’t come into my country. We don’t want you. You’re not good enough for us, you’re dangerous to us.’ It makes me feel like people are fearing me.”

Hassan said her family is hopeful they can resolve the dispute through legal avenues, but she is unsure when she will next be able to see her father.

“I just want to see the division stop,” Hassan said. “For people to trying to understand who we are and get educated about us and what we have been through, rather than see us through a lens.”

With Trump’s second issued ban still wrapped up in a legal battle, Brelje said he thinks it’s “50/50” odds that the 9th Circuit will uphold the challenges. If not, the case will go to the U.S. Supreme Court, Brelje said.

“There still is the question of ‘what is the intent behind this?’ So, that’s the argument that’s left, and that’s what the Hawaii court said,” Brelje said. “All of the background information that applied to the first executive order is still there. We can’t change the fact that the president said he wanted a Muslim ban.”

Gallab said he was not personally concerned about the ban because he has dual Sudanese-U.S. citizenship. He did say the ban “sends a negative message to every single Muslim student.”