President Donald Trump’s latest executive order would bar the admission of refugees for 120 days and prohibit any immigrants from six countries for 90 days, time the president said is needed to review how people applying to come here are screened. (Photo by Allan Caplan/Creative Commons) 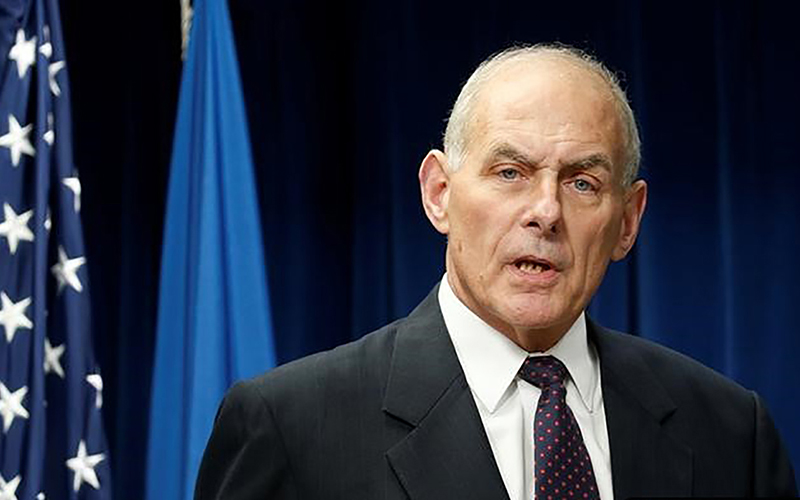 WASHINGTON – President Donald Trump signed a revised travel ban Monday that dials back vetting procedures from his earlier executive order but keeps much of the rest – sparking similar debate among supporters and critics of the original action.

The new executive order, like the first one that was blocked by a federal court, would impose a 120-day ban on refugees coming to the U.S. and a 90-day ban on any immigrants from a list of countries.

Those countries were targeted because the administration said they are not able to support proper vetting of immigrants, but critics, noting that the countries were all majority Muslim nations, quickly labeled it a Muslim travel ban.

The revised order takes Iraq off the list of countries that will face a U.S. travel ban but still bars entry into the U.S. from six other countries listed earlier – Iran, Syria, Yemen, Sudan, Libya and Somalia. The new order also gives government agencies 10 days to prepare for the ban, and will allow anyone who gets a visa before March 16 to still enter the country.

The changes did not impress Rep. Raul Grijalva, D-Tucson, a critic of the original ban who said the only difference between it and the new version “is the time Trump and his cronies spent scheming up a plan to get it past our legal system.”

“Barring people based on their nation of origin or the religion they practice isn’t just a policy change,” Grijalva said in the statement. “It’s a tacit admission by our new president that he is incompetent to lead in ways his predecessors were not.”

But supporters of the action say it is necessary to give government agencies time to review refugee vetting procedures to make sure no terrorists can slip in to the country while posing as refugees.

Rep. Paul Gosar, R-Prescott, said in a statement that he “continues to fully support” Trump’s executive actions on immigration and the refugee-vetting processes.

“It’s refreshing to see an administration that isn’t ashamed to uphold the most important constitutional responsibility of the federal government – to protect the American people,” Gosar’s statement said.

It went on to say that officials with the FBI, the Homeland Security Department and other national security authorities have testified before Congress “that they do not have the necessary resources to thoroughly vet immigrants and refugees from terrorist strongholds.”

That was echoed in a briefing by administration officials after the signing Monday.

Attorney General Jeff Sessions said the targeted countries are “unable or unwilling to provide the information we need to vet them responsibly” and the executive order provides what he called “a needed pause” to review those policies.

Homeland Security Secretary John Kelly said in the same briefing that the government is “undertaking a rigorous review of our immigration vetting program” for people applying to come to the U.S.

Data from the State Department’s Refugee Processing Center show there were 1,868 refugees from Iran, 5,557 from Syria and 4,582 from Somalia admitted to the U.S. in the first five months of fiscal 2017, or 12,007 of the 37,027 total admitted during that period. Those were similar to the levels in fiscal 2016, when refugees from those three countries accounted for almost a third of the total 84,990 refugees the U.S. took in for the year.

Arizona took in more refugees than all but five states in fiscal 2016, when it resettled 4,110 refugees from all countries, according to the Pew Research Center.

Officials with the International Rescue Committee in Arizona, which helps resettle refugees in the state, were not available to comment on the latest travel ban. But the IRC’s headquarters in New York said the ban further harms refugees, including 60,000 who have already been vetted to resettle in the U.S. but have not received visas, leaving them “stranded in crisis zones.”

“This ban doesn’t target those who are the greatest security risk, but those least able to advocate for themselves,” said the statement from IRC President and CEO David Miliband. “Instead of making us safer, it serves as a gift for extremists who seek to undermine America.”

But Ira Mehlman, a spokesman for the Federation for American Immigration Reform, said the countries targeted in the ban were identified by President Barack Obama’s administration as being “of concern” to the U.S. Trump is right to act now, he said.

“You shouldn’t have to wait until you have a huge tragedy on your hands in order to act,” Mehlman said.

Even though it is an executive order, Grijalva said the fight will likely continue in Congress.

“I will fight this Muslim ban and every other corrosive policy Trump pursues that betrays who we are as a people and leaves our nation fundamentally less safe,” he said in his statement.