Now, he’s a motivational speaker. He served as the keynote speaker at the American Indian Disability Summit in Phoenix last month. The conference had more than 200 attendees, including those with disabilities and their families. 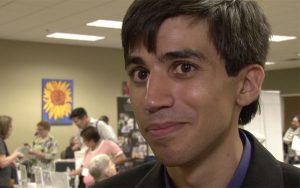 Greggory Ohannessian, who has autism, served as the keynote speaker for the 13th-annual American Indian Disability Summit in Phoenix. (Photo by Mija Maslar/Cronkite News)

“Pursue your goals,” Ohannessian said. “Don’t quit first hand. When you make a transition, it will be tough, but what’s important is that you get the right services and learn to advocate for yourself when things don’t go right.”

“People with disabilities don’t have sidewalks sometimes on reservations,” Perry said. “They don’t have trails that will lead them to be able to get around.”

Research has shown that some American Indians live in “deplorable” conditions, where they’re isolated and lack economic opportunities and resources, according to the American Indian Relief Council.

Native Americans have the highest poverty rate among races – at 35.8 percent in Arizona. The next highest was Latinos at 26.3 percent, according to a report by the Center for American Progress. Certain factors may create barriers to employment and contribute to the high poverty level.

Mental health is one challenge they face. Native Americans experience psychological distress 1.5 times more than the general population, according to a report by the American Psychiatric Association.

The population also faces obstacles, such as lack of insurance and access to care, when seeking treatment.

“What helped me was learning how to build communities,” Ohannessian said. He suggested youth get involved with clubs and work with instructors and students.

The American Indian Disability Summit offered workshops for youth on self advocacy, bullying and suicide prevention and career success.

Ability 360 sponsored the event. The nonprofit organization helps empower those with disabilities in the Valley. It offers outreach to rehabilitation centers, employment services and early intervention for newly disabled individuals. It also connects consumers with resources.