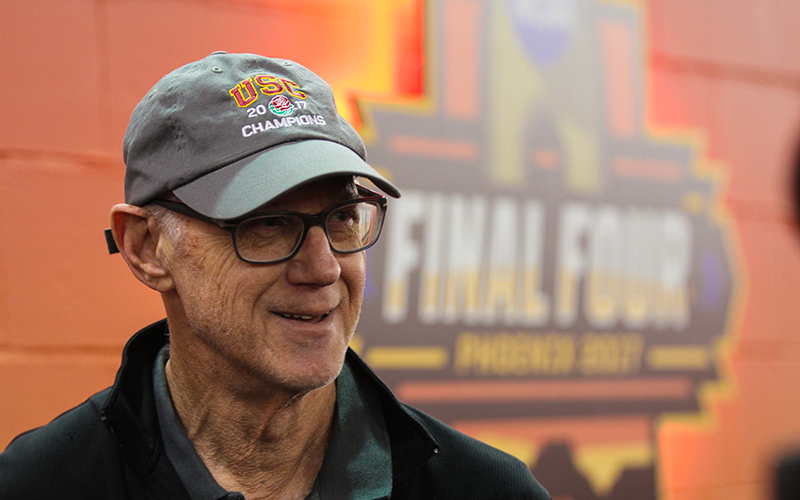 CBS Sports director Bob Fishman discusses the behind-the-scenes of putting together a TV production at the Final Four. Photo taken at the University of Phoenix Stadium on March 31, 2017 in Glendale. (Photo by Blake Benard/Cronkite News)

GLENDALE — While there have already been a lot of big shots taken inside University of Phoenix Stadium during the NCAA men’s Final Four, the most important shot for CBS television viewers comes from way outside — well beyond the basketball floor.

Throughout the Final Four, Bob Fishman, lead director for CBS’s NCAA basketball coverage calls those television shots from the CBS Sports production truck located outside the stadium. It is the 35th time Fishman has directed a Final Four broadcast.

Fishman directed his first Final Four in 1982, when only seven cameras were used. This year, 32 cameras are set up inside the stadium, catching every possible angle of the action.

“People ask me all the time, what do you mean you have 32 cameras?” Fishman said on Thursday. “‘Isn’t there one camera, and it’s all remote control?’ and I say, ‘Think about what you just said. How do you think shots change?’ ”

In this year’s production, CBS is experimenting with new technology. The network has cameras ringing the upper concourse to highlight people. Additionally, there are new high-speed cameras embedded in the basket support stanchions for a new perspective of the game.

Inside the production truck, Fishman sits in the front row, focusing on eight main cameras in the middle, while keeping track of the others in case he wants a different shot.

“You have to keep up with the technology,” Fishman said. “Do I need 32 cameras to direct a basketball game? Of course not. But it makes great replays. We are always under the gun. Officials now review a lot and it can be annoying at times, but it’s just part of the job. That’s why (there’s) so much equipment, because of the nature of the venues now.”

And while there may be new elements in the broadcast this year, Fishman’s favorite part of the job remains the same.

“It’s the part of it that, you just don’t know what is going to happen,” Fishman said. “It’s unlike anything else. But it’s not just the games, it’s the emotions, it’s the great finishes that we’ve had over the years.

“It’s a thrill of sitting in that chair and knowing that whatever you choose for people to see, which one of the cameras that you have is the right one to choose, and there is something thrilling about that.”

Fishman never actually played basketball growing up and didn’t know much about the sport in general. So when he got his first basketball job in 1981 leading up to the 1982 Final Four, he had his work cut out for him.

“It was daunting at first,” Fishman said. “I had to learn the sport, I had to learn the pace of the game. Every game is different. Some teams run, some teams press, some teams play half court. But again, it’s just about the love and the drama of doing live television. There’s nothing like live TV and there is very little live TV left anymore. Just news and sports.”

Fishman said he had a love affair with sports that began when he was 8.

“I grew up in the Caribbean, in the Virgin Islands, so my only contact was through radio,” Fishman said. “Back in those days I was a huge (Los Angeles) Dodgers fan, listened to Vin Scully at 4 o’clock in the morning re-broadcasting games, and that’s when I got the bug. But like most kids my age I wanted to be the next great baseball announcer.”

That dream, however, didn’t pan out.

“I realized I wasn’t so good when I got to college,” Fishman said. “I focused on broadcasting courses and when I started writing scripts and blocking shots and actually directing small little projects, I kind of had an affinity for it and that’s what I wanted to do.”

“My first directing job was the Apollo 17 (launch),” Fishman said. “(It was) the nighttime launch at Cape (Canaveral) because the director who was assigned to it was ill. I was the only other member of the Directors Guild on site so I was the guy who ended up in the chair directing Apollo 17 and that’s how it all started.”

After his time in news, Fishman made the move to CBS Sports as the director for “The NFL Today” and then directed his first Final Four in 1982 at the New Orleans Superdome.

But in 1990, Fishman was diagnosed with non-Hodgkin’s lymphoma. He missed the Final Four that year while in a New York hospital. It was the only Final Four he has missed since 1982.

“It was never about I was not going to make it,” Fishman said. “I had the right kind of disease, and I knew I was going to come back, but I was very depressed missing that Final Four. Getting well was the first priority.”

“There was never any doubt about, ‘Am I going to step away and not do this anymore,’ ” Fishman said. “It’s not like I was dying or anything, or I was going to die. It took me to another path in my life with the foundation that we started, but I was always going to come back.”

Fishman celebrates his 68th birthday today, the off day between Saturday’s national semifinals and Monday night’s championship game. His wife and two sons have joined him for the celebration in Arizona.

“You know what I say to people who say how old are you going to be? I say ‘old enough,’” Fishman said. “But the truth of the matter is when you have a bone marrow transplant and you have a brand new immune system, I’d like to say that I’m 26 because it was 26 years ago.