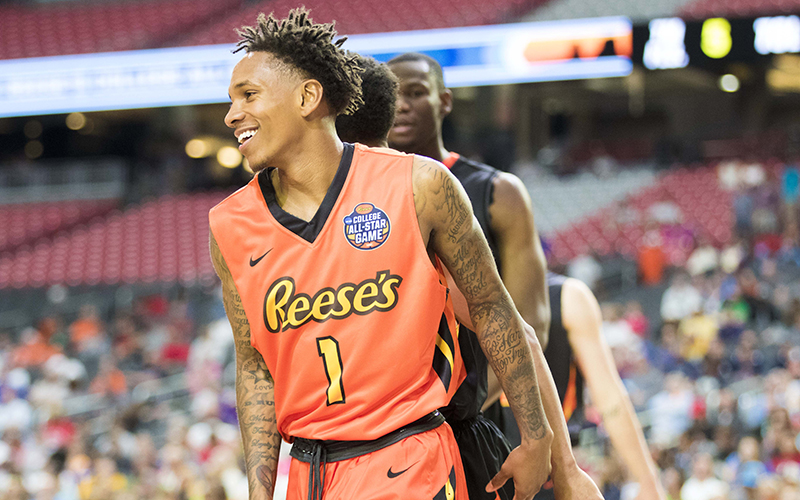 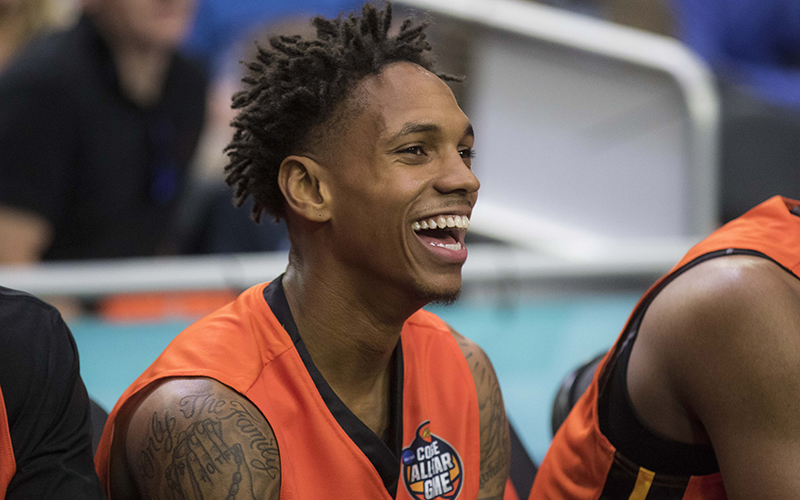 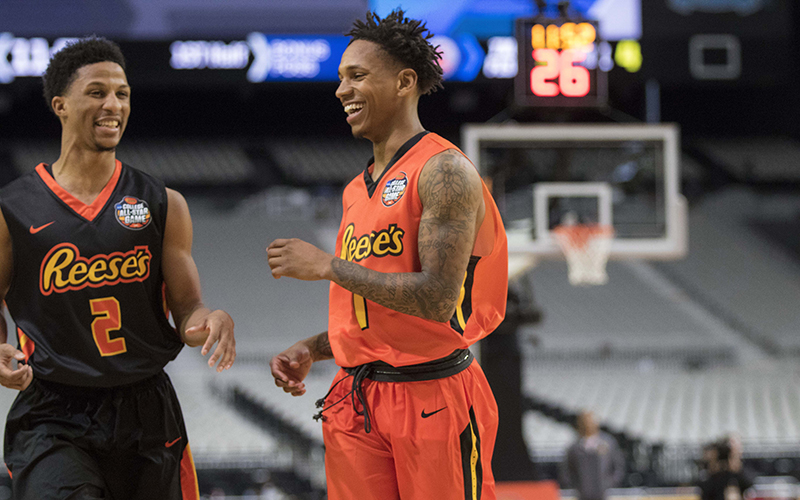 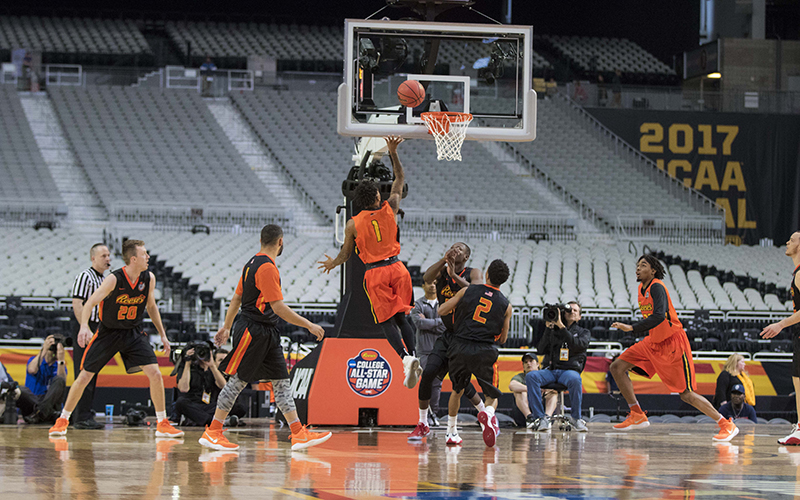 Grand Canyon Univerity senior guard DeWayne Russell lets loose a rainbow shot that falls for his first two points of the Reese’s College All-Star Game at the University of Phoenix Stadium on March 31, 2017 in Glendale. (Photo by Blake Benard/Cronkite News)

GLENDALE — Grand Canyon University isn’t eligible to participate in the NCAA Tournament until next season, but that didn’t keep one Antelope from playing on the Final Four court.

Senior guard DeWayne Russell participated in Friday’s Reese’s College All-Star Game at University of Phoenix Stadium, contributing nine points off the bench in 21 minutes as the West fell to the East, 121-90.

Russell, who led the Lopes in each of his three seasons after transferring from NAU and averaged a team-best 21.2 points per game, capped off a busy week with Friday’s game. The Peoria native also took part in Thursday’s State Farm Slam Dunk and 3-Point Championships at his own home arena, losing to Iowa’s Peter Jok in the final.

“I had a lot of fun,” Russell said. “It was really a good experience, and I was happy to be a part of it. I was just happy to be chosen. There’s a lot of good players who aren’t here (this week), so I’m just glad I was able to go and take part.”

Russell was surrounded by family at both events, including his uncle, Will Roberts. Roberts served as an assistant coach for Peoria High School when Russell led the program to a Division II state title as a senior, and has been almost like a father figure to Russell.

Roberts said Russell overcoming various obstacles — including moving from Philadelphia and overcoming his father’s murder — made this week’s outings even more special.

“This is huge,” Roberts said. “When you set your goals out and your dreams and stuff like that, you set your dreams high, but you’re not expected to have a bunch of success coming from that situation. The door or opportunity seems really slim. To see him have this type of success is humbling.”

Roberts said he and a group of about 20 to 25 family members and friends came to watch Friday’s All-Star game, with several others watching the contest on Thursday.

Russell helped lead GCU to a 22-9 record, including an 11-3 mark against Western Athletic Conference opponents. With their impressive play and the notable acts of the GCU student section, known as the “Havocs,” the program has all the looks of one on the rise.

“It’s like you have this brand-new soda, and you’ve shaken it before you open it. It’s something that’s like building over there at GCU,” Roberts said.

Such a mark should have made the Lopes candidates to make a run at making the NCAA Tournament. Instead, they were serving the final year of a 4-year wait period before the school was eligible after their move to the Division I level.

If they continue their current trajectory, the Lopes could shoot for higher goals than just playing in the postseason. If all goes well, they end up like Gonzaga, a mid-major who turned itself into a powerhouse and is now in its first-ever Final Four.

“To me, they are a little bit of a sleeping giant with what they’ve got going there,” Gonzaga coach Mark Few said of GCU. “And the thing that I see is they have that growth mindset that Gonzaga has had during this whole run and so definitely on the rise.”

While Russell won’t be around to see the next phase of GCU basketball, his performance during this weekend’s festivities allowed him to put himself and the program on the national map one last time. Russell said he hopes more basketball is in his future, and added he has high expectations for his soon-to-be alma mater.

“I know where it’s going,” Russell said. “I know in the future it’s going to big places, and I’m happy to represent it the right way. GCU’s going to the NCAA Tournament next year.”