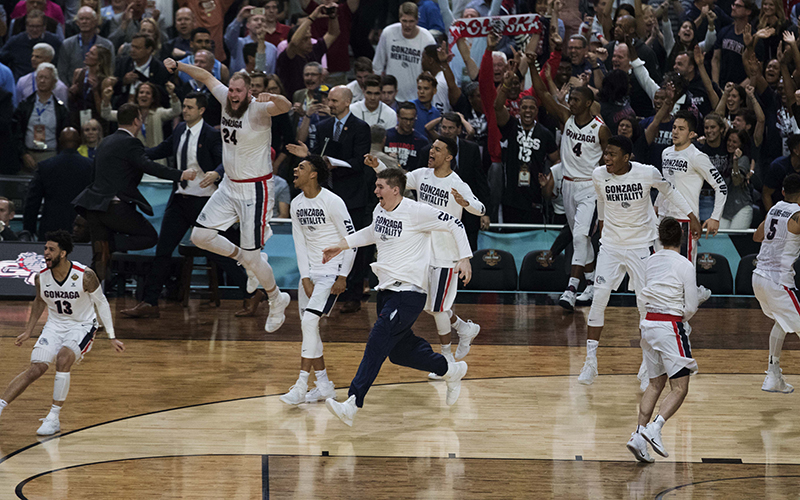 The joy of victory. Gonzaga’s bench celebrates after topping South Carolina 77-73 to continue its historic March Madness run at at University of Phoenix Stadium on April 1, 2017 in Glendale. (Photo by Blake Benard/Cronkite News) 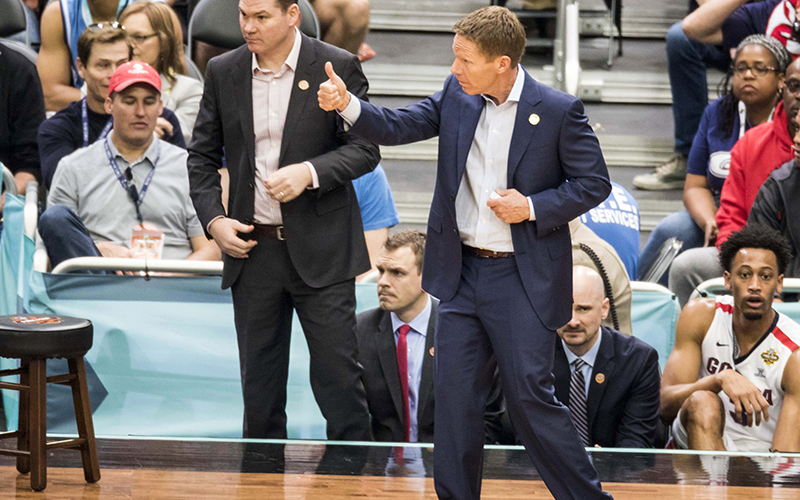 Gonzaga head coach Mark Few signals his approval for the Bulldogs defense in the first half of Gonzaga’s Final Four matchup vs South Carolina at University of Phoenix Stadium on April 1, 2017 in Glendale. (Photo by Blake Benard/Cronkite News) 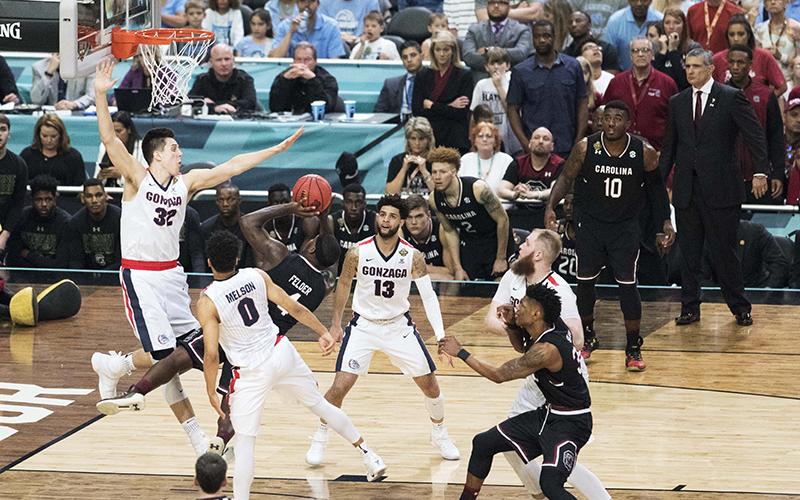 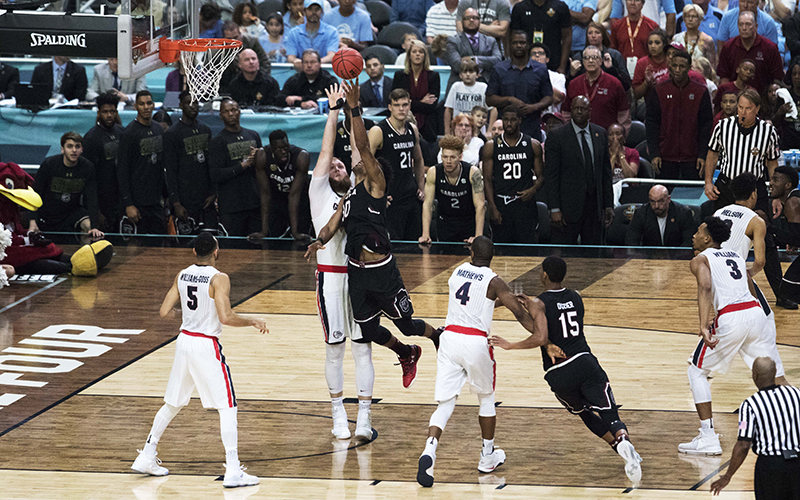 Gonzaga’s Przemek Karnowski stretches his seven-foot, one-inch frame while defending Chris Silva’s (30) shot attempt in the second half of the Zags Final Four win at University of Phoenix Stadium on April 1, 2017 in Glendale. (Photo by Blake Benard/Cronkite News) 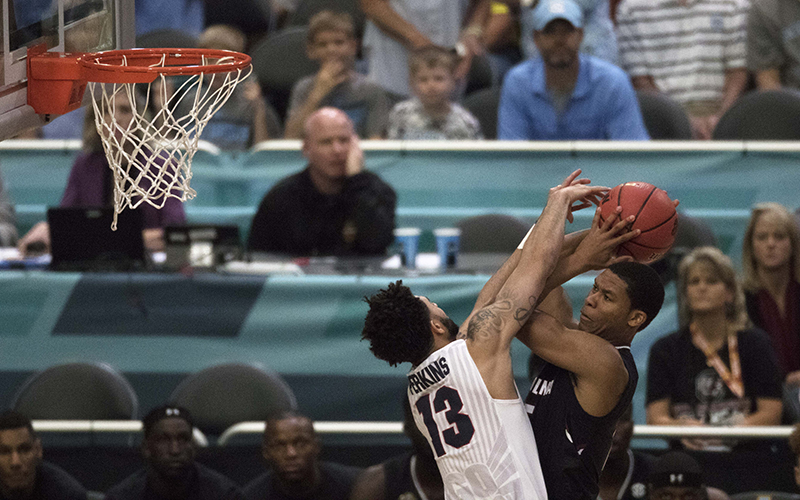 If Gonzaga would have won that Elite Eight game, it would have made it to the big stage: the Final Four. Now it’s 18 years later, and the Bulldogs are finally on that stage and doing just fine.

After their 77-73 win Saturday over South Carolina in the national semifinal game at University of Phoenix Stadium in Glendale, the Bulldogs are on the precipice of winning their first national championship.

“This is what we wanted to do,” Gonzaga’s Nigel Williams-Goss said after Saturday’s game. “This is what we have talked about all year long . . . from our very first meeting, we said if our goal isn’t to win a national championship, we are selling ourselves short because we have all the pieces right here. We understood what it was going to take. We couldn’t take shortcuts and we knew we had to work day in and day out and we did that. Now we are 40 minutes away, and I couldn’t be more excited.”

In the aftermath of Gonzaga’s 1999 tournament run, head coach Dan Monson left for the same role at Minnesota. Assistant coach Mark Few replaced him. The Bulldogs have since made every NCAA tournament under Few, and Saturday he finally coached in the Final Four.

“I don’t know that I could make a statement that would sum up, A, how I feel and, B, to describe that game,” Few said. “Man, just an awesome, awesome basketball game, with just how hard both teams competed.”

Gonzaga can become the first team from west of the Rocky Mountains to win the championship since Arizona in 1997.

“It means everything,” Williams-Goss said. “We are playing for something way way bigger than us, and I just couldn’t be more happy for my teammates and my coaches.”

There were 77,612 fans watching at University of Phoenix Stadium. And while the Bulldogs were new to the big stage — and to a domed football stadium — nerves never really kicked in.

“We got shots up right before the game in the stadium so it felt kind of comfortable,” Gonzaga’s Silas Menson said. “And once the ball tips off, it just feels like another game.”

The Gamecocks, on the other hand, admitted they were nervous, getting off to a slow start and only shooting 37.9 percent overall. South Carolina’s Rakym Felder said they were “just too amped up” and weren’t playing like themselves.

“Maybe nerves, playing in front of 70,000 people or how many there are in the stands,” South Carolina’s Justin McKie said. “Maybe that, I don’t know, but we didn’t come out with that ‘oomph’ like we usually do from the get-go.”

Gonzaga opened hot and controlled most of the game, leading for all but five minutes.

“We came out a little sluggish and tried to get it back the second half, but Gonzaga is a tough team to play against,” Felder said. “Tip my hat to them. They were just the better team tonight.”

At halftime, Gonzaga led, 45-36. Williams-Goss had 12 points at the half and finished with a game-high 23 points on 9-of-16 shooting from the field.

“We knew it was going to be a battle for 40 minutes,” Williams-Goss said. “Credit to us. We had a good first half and we knew nothing comes easy, especially this late in March (Madness). Just credit for sticking together and staying poised and being able to pull a tough one out.”

Gonzaga’s star center Przemek Karnowski finished the game with 13 points and five rebounds after overcoming being poked in the right eye by South Carolina’s Chris Silva, knocking him out of the game for about the final five minutes of the first half. He went to the locker room with 1:35 left in the half to tend to the injury.

“I got blocked, but he just put the finger in my eye,” Karnowski said. “I had blurry vision, a little bit shadow. I couldn’t really open it. So I just went to the locker room. I saw (an) eye doctor and one of our trainers, tried to take care of it. And by the time we were going out from the halftime, it started feeling a little bit better. And throughout the whole second half it was getting better and better.”

With Karnowski returning for the start of the second half, Gonzaga controlled the tempo early, jumping out to its largest lead, 62-48, with 11:35 remaining.

South Carolina then produced its latest comeback in this tournament. The Gamecocks roared back with a 16-0 run to lead, 67-65, with 7:06 left.

But led by Karnowski, the Bulldogs immediately responded with a 7-0 run to take control. Gonzaga fought off a pesky Gamecocks team that had their chances but couldn’t connect.

In a game between defensive-minded squads, Gonzaga’s 7-foot Zach Collins had career highs in rebounds (13) and blocks (6).

“I knew I had a couple of rough games before this,” Collins said. “And I wanted to come out and just play a lot better for my team. In my head, I just said, I had no choice. And that’s when I told Nigel I just felt really good.”

Collins wasn’t the only one. Gonzaga found out it feels really good to be on the big stage and is ready for another performance in Glendale Monday night.