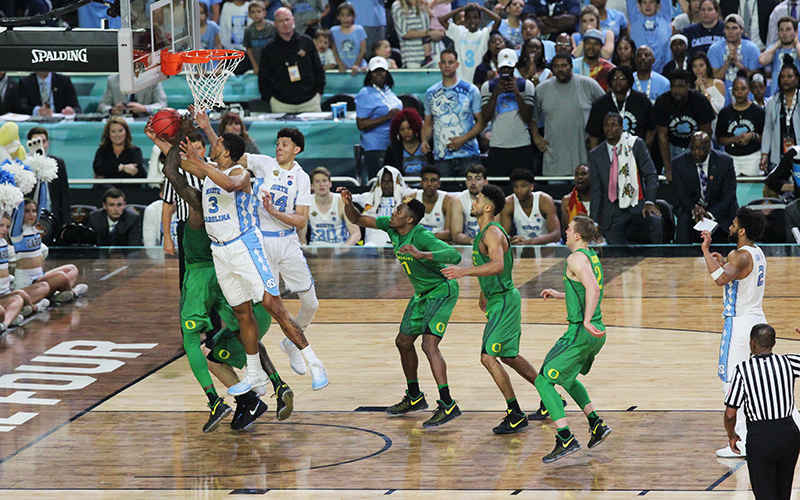 North Carolina forward Kennedy Meeks fights for the rebound during a Final Four matchup against with Oregon at University of Phoenix Stadium on Saturday, April 1, 2017, in Glendale. (Photo by Tyler Drake/Cronkite News) 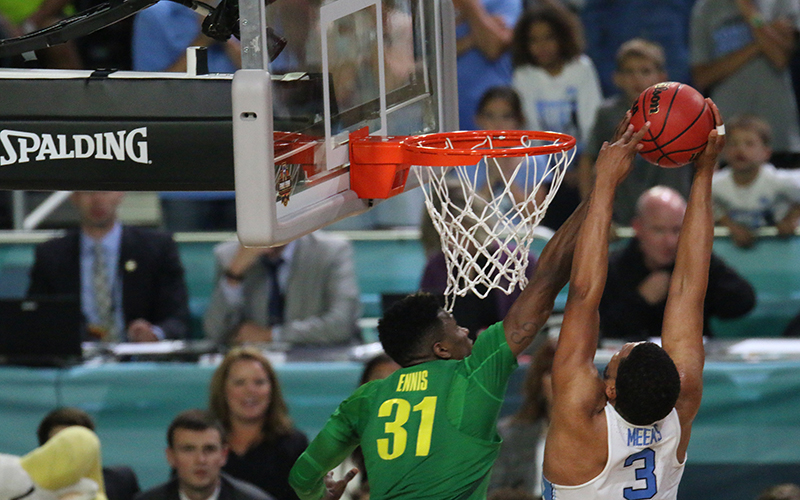 GLENDALE — It’s going to be hard for North Carolina to shake off the ghost of Villanova guard Kris Jenkins’ buzzer-beater in last season’s national championship game. Especially with him in the building, rocking a Tar Heels shirt in support of his brother — UNC senior guard Nate Britt.

Then there’s the matter of the late-game sequence, which appeared to align itself for a second-consecutive NCAA Tournament exit on a buzzer-beater for the Tar Heels.

North Carolina hung on, however, knocking off Oregon 77-76 at University of Phoenix Stadium on Saturday to clinch a second-straight berth in the national title game.

Maybe Jenkins wearing Carolina blue meant the ghost was now on their side?

The Tar Heels went the last 5:53 of game time without making a single shot, and missed four free throws in the final five seconds, but still gave themselves a chance to flip the script on last season’s loss with a win on Monday.

Just inching by didn’t sit well with North Carolina coach Roy Williams as he saw his team nearly blow a double-digit deficit in the closing minutes. His thoughts were far from pleasant.

“Oh, jump off the building, something like that,” Williams said. “Yeah, I didn’t like it. There’s no question about it.”

Despite missing all four attempts in the closing seconds, the Tar Heels survived as junior Theo Pinson and senior Kennedy Meeks secured offensive rebounds to deny Oregon a chance to have the ball.

Pinson and Meeks each accomplished something Williams had instilled in his team from its first practice. If you can grab a rebound, catch it. If you can’t, tip it out. Both worked to close the game out Saturday.

Of course, a repeat of Jenkins’ shot was the last thing Berry wanted, and was the first thing on his mind.

“Every time we get to that moment, that shot goes through my head,” Berry said. “I just don’t want to lose a game like that. We weren’t losing this game, and we weren’t going out with another team hitting a game-winner on us.”

The 6-foot-10 Meeks became the first person all NCAA Tournament to really make Oregon feel the loss of Chris Boucher — the Ducks’ 6-foot-11 anchor off the bench for most of the season — dominating inside on his way to matching a career-high 25 points while adding 14 rebounds.

“I just knew that we had to be aggressive in the paint,” Meeks said. “Coach told us it was going to be a man’s game, and us four big men had to do a great job on the inside. I took it upon myself to try to do the best I could to call for the ball, especially when my teammates got in trouble.”

Oregon junior forward Jordan Bell was again dominant on the glass and in the paint, blocking four shots and pulling down 16 rebounds while adding 13 points. That wasn’t enough to stop Meeks.

Meeks’ emergence opened up the scoring for North Carolina late in the first half, funneling in putbacks and easy layups. After opening the game 3-for-17 from the field, the Tar Heels went on a 17-6 run to take a three-point lead into the half.

North Carolina forward Justin Jackson showed why he won the Atlantic Coast Conference’s Player of the Year award in the second half, scoring 13 of his 22 points — including a burst of eight points in just over a minute — after halftime.

“Once we started getting stops, we didn’t have to play against a set defense the whole time,” Jackson said. “And I think that was the biggest part of it was we were able to get out in transition and get better shots out of things we wanted to do.”

With no presence inside beyond of Bell, the Ducks’ normally potent offense was stifled. Dillon Brooks and Tyler Dorsey shot a combined 5-for-22 from the floor. A normally efficient unit struggled to keep the ball, posting 12 turnovers in the first half before finishing with 16.

“Obviously the turnovers really hurt us,” Oregon coach Dana Altman said. “We didn’t get enough opportunities. We had 10 less shots than they did, and the turnovers were a big part of that.”

The Ducks struggled from outside in the the second half, shooting 3-for-18 from behind the arc. Brooks, the Pac-12 Player of the Year, fouled out with 1:32 remaining after totaling 10 points.

In his absence, however, the Ducks used a near-six-minute period without a made North Carolina field goal hang around and come within one point on Keith Smith’s layup with 5.8 seconds remaining.

That’s when Meeks stepped up again, getting the board past Bell that would seal the game after four consecutive missed Tar Heel free throws.

“I saw (Bell) bite on it for the first couple free throws,” Meeks said. “He pushed himself in a little more than he usually does. I just tried my hardest to bury him underneath the goal. Coach always tells us to expect a miss, and I did that and the ball fell in my hand.”

North Carolina is back where it was this time last year — playing in the final game of the year with a national championship in mind.

Even though his brother is in town and has that experience, it’s too painful to expect Britt to seek his guidance.

“I’m not going to ask Kris for any advice, and if he gives me any advice I might fight him,” Britt said.